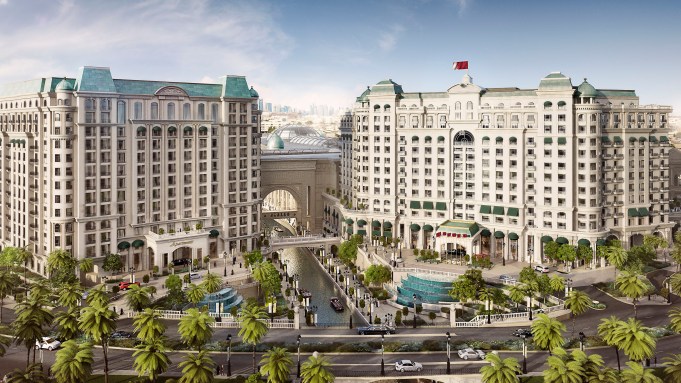 DUBAI — Just when one thought malls couldn’t get any bigger, construction began in March on what is billed as “the most innovative mall in the world.”

In a city known for its pioneering retail developments, the 40.4 million-square-foot Meydan One Mall is poised to include even more record-breaking features — the world’s largest dancing fountains (a record held by the fountains at Dubai Mall), longest indoor ski slopes (even bigger than the one in Mall of the Emirates), and add to that a massive professional-standard sports facility, plus a retractable roof that will be opened in the cooler winter months to create an alfresco shopping and dining atmosphere.

Dubai’s developers are well aware of the pressure to be the biggest and best. “Dubai is a city well-known for creating and breaking world records, in setting new benchmarks in quality and once-in-a-lifetime experiences,” said Saeed Humaid Al Tayer, chairman of Meydan, the developer of the megamall. “We have worked hard to create all the wonders of a retail and leisure experience into one space.”

With the fall of oil prices, the retail sector is a key contributor to gross domestic product growth of economies in countries across the Gulf region, from the United Arab Emirates through Saudi Arabia. “Retailing here is a very attractive business to be in,” said John Iossifidis, head of corporate and investment banking at Mashreq Bank in the UAE, speaking at the Retail Leaders Circle in Dubai last month. “It’s a myth that we have too many malls. There is actually more capacity for malls.”

He said per capita gross leasable area of mall space in the region is half that of what it is in Europe or the U.S. “The data shows that we are underpenetrated.”

Despite sluggish retail sales over the last two years, the pace of mall development has not slowed in the region. In the UAE, the total retail supply stands at 37 million square feet of GLA with future supply expected to grow by more than 20 percent by 2020, according to Jones Lang Lasalle.

Khaled Al Jasser, chief executive officer of Arabian Centres, has 19 malls in Saudi Arabia spread across 10 cities. The company aims to double its retail offering in the next year, with more than 10 malls in the pipeline across the kingdom, making it the largest operator in Saudi Arabia.

“We are very optimistic despite the statistics on a slowdown in sales and retailers suffering,” he said, speaking at Retail Leaders Circle. “Malls in Saudi are very different. They are a destination, an entertainment hub. We have to make sure when our customers come to the mall, they find the experience that they want. Five or six years ago, only 5 to 10 percent would have been food. Now 25 percent of total GLA is food and will probably reach 30 percent.”

He admitted this has even surprised mall developers. “Who would have imagined we would have fine dining in malls?”

Rents in malls have continued to climb, even as sales have slowed or stagnated. “Mall operators need to be careful about their charges because there is a point when we look at our operating costs and if online makes more sense then we will leave,” said Anthony Chalhoub, the co-ceo of the Chalhoub Group, which has more than 600 luxury boutiques across the Middle East and employs more than 11,000 people. The group, which saw flat sales growth figures in 2016 and anticipates the same for 2017, closed 50 stores last year, double its usual annual closure rate.

But analysts say Dubai is not considered to be among the most expensive retail real estate in the world. “Yes, Dubai is more expensive than the rest of the region,” said Iossifidis, but added that “for prime A real estate, it’s much cheaper than Paris or New York.”

He said Dubai ranks 33rd in relation to the most expensive retail real estate globally. “Greece is actually more expensive.” For some brands, taking a location in Dubai Mall can have high rewards. Sephora Dubai Mall has the highest sales in the world per square foot.

“When times get tough, the best get going. Competition and pressure situations do bring out the best in everybody,” said Robert Welanetz, ceo of Majid Al Futtaim Properties, at the World Retail Congress here last month. “Clearly macroeconomic events have hit us in a substantial way. One of the responses we have to become very attentive to is the omnichannel world and think about how do we create emotions that turn reluctant consumers into active consumers. We understand we are an important backdrop and support system to retailers. That is our challenge.”

Integrating technology into mall developments is one way developers are looking to drive greater engagement in malls. “Big data and analytics will help us execute on customization and specialization. We have to adapt to an understanding of how we can cross-benefit from physical assets and correlate with information and data that comes available with hotel guests and consumers.”

Abu Dhabi, just an hour’s drive from Dubai, will soon be home to the first Macy’s outside of the United States. The department store, along with a Bloomingdale’s, will be an anchor in Al Maryah Central, which opens in 2018. The 2.8 million-square-foot mall is in the heart of Al Maryah Island’s 15 million-square-foot central business district. The island has more than 100,000 square feet of landscaped parks and a waterfront promenade. It is connected through air-conditioned interior walkways to allow people to walk from place to place, even in peak desert summer weather.

Fifty percent of Al Maryah Central’s GLA is leased ahead of its opening next year, said Daniel Parry, managing director of Gulf Related. He attributed that to the “sophistication of Abu Dhabi’s consumers.”

“The number and quality of flagship leasing agreements and much-loved international brands, which we have secured for Al Maryah Central, speaks to the enthusiasm in the market for this project,” Parry told WWD. “Abu Dhabi’s annual retail spend is projected to reach $12.18 billion by the time Al Maryah Central opens in 2018, and this development is strategically located at the heart of this market.”

In designing the mall, Parry said they worked closely with their retail partners to understand what customers wanted from the shopping experience. “We worked with the retailers to design stores that are good for them.” But the malls are not just about the retail. “People want a sense of community and want to be entertained. So we increased our entertainment offerings for all age groups,” he said.

Capturing an audience’s attention is something that developers in Qatar have struggled with as well. The small gulf country, which has the world’s highest per capita GDP, presents a potential gold mine for luxury brands. But historically, Qataris are used to shopping during holidays in Europe, with London and Paris being their favored destinations. How can a mall developer get them to spend at home? By bringing Paris to Doha.

“There is no doubt that if one mentions a luxury retail environment, Paris is the first place that comes to mind,” said Sean Kelly, project director of Place Vendôme, the $1.25 billion Parisian inspired mixed-use retail development. The megamall, which is expected to be completed at the end of next year, is part of Lusail City, a master development that will host the main stadium and opening and closing matches of the 2022 FIFA World Cup.

The project will package 10 million square feet of retail, leisure, entertainment and luxury into a one-stop family destination by the seafront. Place Vendôme will be reminiscent of the famous shopping street Rue de la Paix, which has Place Vendôme as the starting point. The Middle Eastern version brings together European architecture with state-of-the-art technology.

“The external facade is synonymous with the Ottoman architecture of Paris. For the interiors, we have taken iconic elements of Parisian design like the metalwork and used it in a more simplified way,” said Kelly. The flooring patterns are inspired by Versailles and the skylights are influenced by the Grand Palais. “We are taking elements and using modern materials and combinations. We are creating a little bit of Paris in Arabia with a modern twist, it’s our own version, reinterpreted and modernized.”

Qatar does not have the same tourism numbers as its neighbor Dubai, but it hopes to build on the same model by creating key cultural destinations like the I.M. Pei-designed Museum of Islamic Art.

Kelly said: “With this project we intend to be part of the tourism infrastructure of the country. In the not-too-distant future, it will be very easy for tourists to come to Qatar, with our new modern airport, and Qatar Airways promoting stopovers, we hope to take advantage and be part of that story.”