Asking rents in Manhattan declined in 11 of 16 prime retail districts between fall 2008 and fall 2009, according to a new survey. 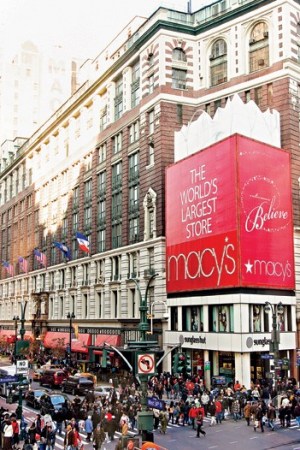 It helps, but with the economy still volatile and unsteady, even location isn’t a guarantee that retail rents in Manhattan’s top shopping corridors will rise.

Asking rents declined in 11 of 16 prime retail districts between fall 2008 and fall 2009, according to a new survey by the Real Estate Board of New York, a 12,000-member group representing commercial and residential property owners, builders and brokers, among others.

Overall average asking rents for retail space in Manhattan fell 9 percent to $117 a square foot from fall 2008 to fall 2009, the report said.

The biggest hit was in the 34th Street-Herald Square area, between Fifth and Seventh avenues, one of the city’s busiest commercial zones, which dropped 35 percent to $421 a square foot. Asking rents in the Financial District on Broadway, between Battery Park and Chambers Street, declined 25 percent to $189, followed by 24 percent decreases on East 86th Street, between Lexington and Second Avenues, to $363, and on Columbus Avenue, between 66th and 79th Streets, to $229.

“The global economy continues to have an impact on asking rents for retail space this fall,” said Steven Spinola, president of REBNY, who added stores that had been “priced out of the market now have an entry point for the first time in years.”

Despite overall declines, Spinola cited evidence of “solid activity” in the market.

In the Herald Square area, for example, this year has seen the openings of J.C. Penney’s first Manhattan flagship, as well as Aéropostale’s first street-front flagship in the city, along with Geox and soon, Esprit.

“In some areas, the market is so traumatized by upheaval, no one knows what the right thing is to do with rents,” said Michael Slattery, senior vice president of REBNY. “Some have decided not to do anything and just watch. There’s no standard way of behaving anymore.”

Some landlords are offering limited free rent periods and other concessions, such as an allowance of $20 a square foot toward improvements. “The market is softer,” Slattery said.

“Some spaces on 34th Street have been for rent for a while,” said Michael Hoffman, senior managing director of real estate consultancy Colliers ABR. “If the landlord has no debt on the building and can do a deal, they do a deal. While some folks haven’t changed asking prices, brokers are saying the whisper in their ear is substantially less.”

The average discount from asking to actual rents in Manhattan can reach as high as 10 to 12 percent.

The rent declines cut across the spectrum. The Madison Avenue luxury corridor, from 52nd to 72nd Streets — home of Ralph Lauren, Barneys New York, Chanel and Calvin Klein — dropped 20 percent to $919 a square foot. Celine and Krizia departed the area, making way for Michael Kors and Giorgio’s of Palm Beach.

However, Burberry scooped up space on Madison Avenue between 49th and 50th Streets, creating a 68,000-square-foot U.S. headquarters with office space for 200 employees and the first Burberry London and Burberry Brit stand-alone stores. The payoff is a mix of office space and retail, featuring 50-foot Burberry logos on the roof.

“People are thinking, ‘Am I going to kick myself next year? I probably would’ve missed the bottom,’” Hoffman said.

Although unemployment continues to rise and consumers have not signaled they are any less focused on value and tightened spending, Faith Hope Consolo, chairman of retail leasing, marketing and sales division for Prudential Douglas Elliman real estate, sees better times ahead. She predicted the retail vacancy rate in Manhattan would drop to 10 to 12 percent by yearend from the current 18 to 20 percent.

“I saw tremendous pickup at the end of the second quarter,” she said. “And third quarter, there was a feeding frenzy. We’re on our way back. We were crawling, then standing up and slowly walking. Maybe soon we’ll be running.”