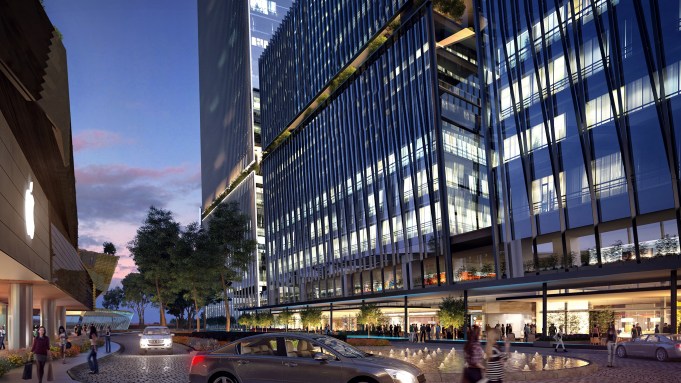 MEXICO CITY — Mall developers are shrugging off growing risks that President Trump’s anti-Mexico policies will wreak havoc on the Latin American nation’s economy, sticking with plans to spend $6.5 billion to roll out more than 40 mixed-use projects by 2021.

They are continuing with their projects even though some analysts have warned that developers could delay or scrap up to half of about 50 to 100 malls commissioned over the next three years if economic conditions deteriorate more than expected. The U.S. President has wavered on the country’s commitment to the North American Free Trade Agreement, threatened to potentially impose unilateral tariffs and expand laws to expel millions of illegal Mexican immigrants and tax remittances to build a border wall that is expected to cost more than $20 billion.

“Our projects are for the long haul, much longer than Trump’s term, so we don’t expect a negative impact,” said Jose Juan Sordo, real estate director at Grupo Sordo Madaleno, a developer behind many of Mexico’s high-end malls, including Antara Polanco and Andares in Mexico City and Guadalajara, respectively.

GSM will spend 50 billion pesos, or about $2.5 billion at current exchange, to develop 10 projects over the next three years, including eight malls and two mixed-use properties.

In 2017, the firm plans to open Artz Pedregal — a new concept incorporating an art gallery — on the southern tip of the Mexican capital and enlarge its Plaza Satélite center. GSM also intends to roll out its first premium outlet in Queretaro in early 2018 and another such outlet in the megalopolis’ Azteca soccer stadium by 2020, Sordo revealed.

Artz Pedregal is the first iteration of future centers blending galleries or art events with shops, restaurants and other entertainment. The gallery will be established in partnership with Zona Maco, which organizes Mexico’s leading annual art fair.

“Our architecture, design and high-quality finishes are one of our big differentiators, as well as the fact that the biggest fashion groups have brought their boutiques to our malls,” Sordo said. “We wanted to bring an element of art to enhance our offering.”

The developer’s properties are typically larger and more premium than rival Thor Urbana’s, which is also pressing ahead with plans to open 15 projects by 2020 at a cost of $1.4 billion.

The first stone will be set in the fourth quarter, with the initiative costing 22 billion pesos, or $1.1 billion, and opening in late 2021. Reforma Colon is in addition to GSM’s other 10 projects.

Despite the growing political and economic uncertainty, GSM has sufficient capital to expand and enjoys low financing rates (with a 50 percent loan-to-cost ratio versus rivals’ 55 to 60 percent), shielding it from rising interest rates in Mexico, Sordo claimed. GSM has financed 80 percent of its properties with its own cash and from several unnamed Mexican investors. International financiers have contributed the rest.

“We plan to continue with all the projects,” said an investor relations executive, requesting anonymity. “We have evaluated what is happening in Mexico and see it only as a temporary thing. In the medium to long term, the economy will stabilize.”

Gicsa will invest $1.5 billion to build 16 complexes in the next three years, 10 of which will be shopping facilities, four mixed-use projects and two office towers.

This year, it will earmark $472 million to launch a new “mall-entertainment” banner called Explanada in Puebla, nearly double the size of its Mexico City Paseo Interlomas center; open two new malls in Cuernavaca, and finish a mixed-use Island in Merida, the executive said.

Other Explanadas will gradually roll out in the cities of Leon, Pachuca, Queretaro and Culiacan.

The complexes will each measure about two million square feet and have a heavy recreational focus.

“We are going to have a Zocalo [like a main square] where we will feature local bands and artists. These will be huge, multicategory centers with hotels, supermarkets and even health clinics,” the executive said.

She dismissed some analysts’ views that malls face risks from a retail oversupply in some markets.

“Gicsa has an area that constantly looks for expansion opportunities,” she said. “The upcoming locations have been studied and are good options to install our properties.”

“Some are taking a conservative approach on openings to preserve liquidity but others are keeping their plans,” she said. “It really depends on the REIT, what kind of shopping mall and how many it has in its portfolio.”

The slumping peso is already hurting major department stores El Palacio de Hierro and Liverpool, which sell a lot of imported merchandise, as well as fashion franchisor Axo, according to Medrano. This could pressure their ability to meet future lease terms, observers said.

“If they expected EBITDA would grow 5 percent before Trump, that has now fallen to 2 percent,” Medrano said. “I expect a 2 percent operating cash flow decline for Liverpool depending on how much they can translate higher costs to consumers.”

In fact, depending on how the economy fares, he expects the sector will open 20 to 35 malls a year by 2020, adding 100 properties to the country’s current 650-property portfolio.

“The fact that economic indicators will worsen by yearend is no reason for firms to slow or stop their expansion,” he said. “The new shopping centers’ development is based on retail and consumers’ needs for additional space.”

Despite speculation the economy could slip into recession this year after disappointing gains in 2016, builders are in for the long haul and have plenty of cash to pursue the projects, Lizan said.

“The FIBRAs have a lot of cash right now,” he said. “In fact, they don’t have enough projects to finance.”

Lizan added the FIBRAs have only committed 50 to 60 percent of a $25 billion war chest, with most funds coming from Mexican investors and pension funds and about 10 to 20 percent from U.S. or international backers.

Most of the future investment will go to new malls as opposed to renovations.

“This is a young industry and only 10 percent of the stock was built in the Eighties,” Lizan said.

Mexico and Colombia are witnessing Latin America’s fastest mall growth, Lizan said, adding that Colombia is set to open 25 malls a year to take its count to 375 by 2020. In Brazil, where the economy seems to be emerging from recession, dozens of projects have been scrapped since 2013 but are starting to gradually come back, observers said.