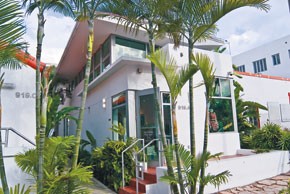 A city sizzles with retail development.

Reflecting the ups and downs of the national economy, business in Miami can be as unpredictable as hurricane season.

But one thing is sure: there is plenty of store development going on in this city, which draws from a region of about 2.4 million. Projects range from luxury properties and big box centers, to independent boutiques and national chains’ multiple stores in the same neighborhood.

“Miami actually didn’t build enough retail space for when all the [new] residential units are up and occupied. It’s traditionally been underretailed,” said Michael Comras, principal of Miami Beach-based Comras Co., which specializes in retail leasing and development.

In Miami Beach, Comras filled in Eighth Street with LF, Solstice and OndadeMar boutiques. The corridor is bordered to the west by Washington Avenue’s AG Adriano Goldschmied and Diesel, which is undergoing renovations, and Collins Avenue to the east.

From Fifth to 10th Streets, Collins Avenue remains a hot spot. The Webster Miami, a men’s and women’s designer apparel and accessories store, has operated in a temporary space at 919 Collins Avenue since December, while its permanent, 15,000-square-foot Art Deco property a couple of blocks north is being restored for a September launch.

Comras reports the street is entering a second crossover phase with Lincoln Road.

“South Beach sales are so successful, averaging $600 to $1,400 per square foot for better apparel stores, that these companies believe there’s untapped business. Collins also tends to be more tourist-driven, and they need to reach both customers,” Comras said.

“How could I not, since my product is all over Miami?” he asked. “Our store hit the jackpot the first day.”

Scheduled for a May debut, Guess’ Lincoln Road store is 7,600 square feet, approximately the same size as its Collins Avenue shop. Guess’ Paul Marciano describes Lincoln Road as the perfect location, almost the soul of the city of Miami Beach. “Its unconventional energy goes hand-in-hand with the brand’s glamorous, sexy personality,” he said.

Lyle Stern, president of Koniver Stern, said retailers set on a Miami Beach address will have more alternatives as the South of Fifth Street (SoFi) neighborhood strengthens through upcoming restaurants like Gibsons and Fogo de Chao, and as 11-11 Lincoln Road, a mixed-use building designed by Herzog and de Meuron in the Tropical Modernism manner, rises on the outdoor mall’s west end by December 2009. The latter’s 40,000 square feet of upscale retail have been carved into 15 boutiques and two eateries.

“Retailers are moving beyond Lincoln Road’s middle blocks, because most of the street is well-traveled and stable,” he said.

Retail leases at Sunset Harbor, a warehouse district northwest of Lincoln Road where Tomas Maier owns an inconspicuous boutique, have doubled within the last year to $50 per square foot, according to Mika Mattingly, an agent with Majestic Properties’ Real Deal Commercial team.

“Its strong points are a marina, a newly announced parking garage, and the nearby Venetian and Sunset islands with homes in the millions of dollars,” she said.

The relocation of mom-and-pop boutiques from Miami Beach to Biscayne Boulevard began with the strip’s quickly saturated Upper East Side portion. Business has been forced to move south as far as 18th Street, where Danielle Fraser and Serena Minott opened Downtown Divas on the ground level of a condo tower last fall. A neighboring wine bar and sushi restaurant also draw young mothers and career women to their stock of Veronica M., Lucky Brand, Sweetees and Velvet by Graham & Spencer. Inventory retails from $50 to $250, and monthly sales increase 5 to 10 percent.

“We wanted to be the first fashion store in an offbeat area, but it’s showing a lot more life now that all these condos are being closed on,” said Minott.

In the 50’s block, retailers like Maria Palacios, co-owner of Kaiserin, were sold on a quaint cluster of shops’ European vibe. She opened the franchise of a women’s wear boutique based in Munich, Germany, in January. Its 790 square feet are regally decorated with violet paint, damask-embossed wallpaper and a Caboche chandelier.

“We don’t see as many walk-ins because of the economy, but I have weekly regulars who always ask for new items,” said Palacios, adding monthly sales increase 15 percent.

Nasiri, her best-selling line, accounts for half the inventory such as an A-line, knee-length dress in white raw silk retailing for $521. Other vendors are Karen Walker, McQ, Sportmax and Valentino Red, with accessories like Alexis Bittar jewelry, Mulberry leather hobo bags and ever-changing vintage pieces.

“There’s an edgier customer here than in South Beach,” she said.

Neighboring tenant Rick D’Agostino, who owns two other stores in South Beach and on the Upper East Side, opened u.d. style lab, a 1,000-square-foot, women’s and men’s contemporary and denim store, in December. Stocking Robin’s Jeans, C&C and Queen of e.vil, he reports none outsells Oramomi, an organic line of soft cotton tops and dresses with dyed prints retailing from $69 to $200.

“We must go through 30 to 40 pieces a week,” he said, feeling more secure with his latest store’s locale than his others. “Once Midtown starts filling in, and News Lounge, a hangout from the same owner as News Café on Ocean Drive, opens, this place will be hopping.”

Gentrified in the Nineties for home furniture and accessories showrooms like Kartell and Holly Hunt, the 18-block Design District sits north of Wynwood and west of Biscayne Boulevard. It took a while for restaurants to follow, but a thriving dining component has piqued apparel retailers’ interest, especially on Northeast 40th Street. Craig Robins, president of Dacra, a Miami-based real estate developer that pioneered the makeover, dedicated two blocks extending from Northeast Second Avenue to Northeast 1st Court for apparel retail.

“You need the fashion and cafe component to be a real destination. We see this as being a mix like Milan,” said Robins, whose wish list consists of Marni, Balenciaga and Alexander McQueen, among others. “We don’t want to tap into Lincoln Road’s or Bal Harbour Shops’ business. I’m personally going after edgy rather than mainstream designers.”

His company has already pumped millions into property renovations including 20,000-square-foot and 6,000-square-foot buildings for concept stores. Plans call for a boutique hotel, a private museum to house his art collection and an event venue to be designed by architect Zaha Hadid.

“Fashion ceo’s are coming down to research,” he said.

In October, Y-3 introduced its second U.S. venture in a 1,453-square-foot, bi-level layout at 150 Northeast 40th Street. According to a company spokeswoman, sales have been higher than projected, resulting from popular women’s pieces like a hooded tank dress in a black or gray knit for $432, a ruched, striped tank top in multiple colors for $225, and a year-round supply of swimwear. Though the company considered other locations, she said the emerging center best represents the brand’s creative, pioneer spirit.

“Y-3 fused style and sport first, so it wanted to pave the way here,” she said.

“Miami Beach prices have gone through the roof. Lincoln Road rents are $110 to $150 a square foot, and side streets aren’t much better,” she said, excited to move to a much larger place with an art gallery feel. “My local clientele says they only come to the beach for my store anyway.”

Quinones hopes to woo them more so with domestic and foreign labels like Jasmine di Milo, La Petite Salope, Miguelina and Development, and VIP treatment from luncheons to shopping services. Though slightly concerned about giving up international tourist traffic, which enabled her to generate higher sales this year than 2007, she welcomes the art collector bunch.

“I’d rather have one serious customer than 100 ‘just browsing’ walk-ins,” said Quinones.

Comras also is involved with mixed-use projects in Miami proper like The Station at Midtown. Part of the revamping of the seedy Wynwood arts district, it has 200,000 square feet of restaurant and retail space catering to a mix of national and local chains. He said it’s too early to determine specific tenant direction, but plans leave “the T-Mobile’s of the world” to The Shops at Midtown Miami, a new center to the west with Ross Dress For Less, Target and Marshalls.

Near Interstate 395 and Adrienne Arsht Center for the Performing Arts, the Omni Shops, by New York-based development firm Argent Ventures, is where Comras envisions big box players, a gourmet grocery and fashion stores in 300,000 square feet of vertical retail space by 2010.

Proximity to the revitalized arts district and Miami Beach, as well as water frontage, attracted Flagstone Property Group to Watson Island just off the mainland. The company plans to deliver Island Gardens, a luxury village on 10.5 acres with more than 221,000 square feet of retail space dedicated to dining and 60 upscale specialty stores, in 2010.