The four-year renovation of The Ritz is the anchor for the Place Vendôme’s overhaul. 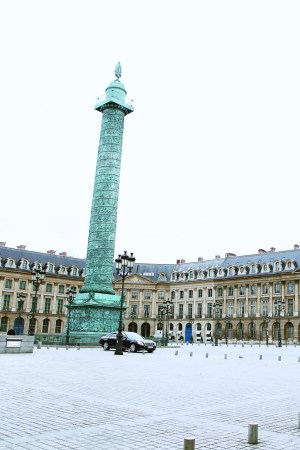 Place Vendôme is ready to sparkle once again.

The Ritz Paris hotel reopened this month after four years of renovations, marking the end of a cycle that has included building delays, two major fires and a complete restoration of the Colonne Vendôme, the military monument that towers over the 18th-century square.

Now the scaffolds are down, the dust has settled and the location — home to leading watch and jewelry brands such as Boucheron, Chaumet, Jaeger-LeCoultre and Van Cleef & Arpels — is gearing up to host a series of glitzy events during Paris Couture Week, set to run July 3 to 7.

“We’ve been waiting for this for years. It’s a real relief,” said Nicolas Bos, president and chief executive officer of Van Cleef & Arpels. “Place Vendôme, which, after all, is one of the most beautiful squares in the world, has been buried under scaffolding and building containers for six or seven years.”

The Ritz renovation, originally scheduled to last two years and cost 140 million euros, ended up taking twice as long, with the budget ballooning to 400 million euros. Half the rooms are still under repair since a fire broke out in January, on the eve of the hotel’s scheduled reopening, causing extensive water damage.

A separate fire in the square’s underground parking garage in 2012 also required lengthy construction work, and several stores have been revamped in recent years — Van Cleef & Arpels in February unveiled a second flagship adjacent to its historic boutique.

The column, erected in 1810 as a tribute to Napoleon I, was renovated because of a donation from Mohamed Al-Fayed, the Egyptian business magnate who has owned the Ritz since 1979. All of this upheaval has impacted foot traffic on the square, considered the epicenter of Paris luxury.

“Between the hotel being shut and the construction work, it wasn’t extremely pleasant to walk around. People came to Place Vendôme to visit the jewelers, but not necessarily to sightsee,” Bos said.

“The square is slightly imposing, it’s a bit barren, so it’s terrific when it comes alive, when things are happening, and the Ritz historically has been the center of activity,” he added. “I think the square will become more pleasant again, there will be more events and the Ritz is a big draw.”

During couture week, the hotel will host presentations by jewelry brands Giampiero Bodino and Ofée in the salons overlooking its redesigned 17,000-square-foot jardin à la française.

The Ritz itself houses three new jewelry stores: Tasaki and Alexandre Reza in-store shops, and a Peter Marino-designed flagship for Graff with an entrance on Place Vendôme. Also on the square, Repossi is set to inaugurate its renovated store, conceived by Dutch architect Rem Koolhaas, on July 4.

Meanwhile, Chanel has invited artist Gad Weil to install a wheat field next to the Ritz from July 1 to 7 to coincide with the presentation of its new high-jewelry collection, Les Blés de Chanel.

The Ritz, last renovated in the Eighties, gave architect Didier Beautemps and interior decorator Thierry Despont the green light to replace everything from the plumbing and electric to elevators and furnishing fabrics. But Frank J. Klein, the longtime president of the hotel, said aficionados would find it essentially unchanged.

“The owner gave the brief in 2012: ‘Don’t change anything. Just do what you have to do, but don’t change the feeling of the Ritz.’ And that’s what we have done,” the German-born executive said. “‘Le Ritz doit toujours être le Ritz.’ [‘The Ritz must always be the Ritz.’] And then the service — we have to have our service.”

The hotel boasts some 600 staff for 142 rooms and suites — down from 159 previously, to make them more spacious. More than half its previous employees have returned, including Serge Dumont, the valet parking attendant who has worked at the hotel for more than four decades.

Room rates have gone up, starting at 999 euros, or $1,130 at current exchange, compared to around 800 euros previously. Klein is conscious that in an era of media cost-cutting, fashion editors may balk at the higher prices.

“We discuss, we see what can we do for you, what can you do for us,” he said. “The doors are not closed, of course not. We need also customers; we need business.”

The luxury sector faces other obstacles. The hotel reopens at a time of falling tourist numbers and hotel occupancy in Paris, a destination tarnished by terrorist attacks, transport strikes and violent protests against government labor reforms. Further, the French capital has suffered its rainiest spring in 150 years.

“OK, it concerns everybody, but how can we make the best of it?” retorted Klein. “We have to cope with it and we will.”

For that, he is counting on a slew of new facilities, including suites with private terraces; the Salon Proust, which serves afternoon tea; the world’s first Chanel spa, with six treatment rooms adjacent to the Ritz Club; and a board room overlooking the inner garden.

“You walk into any other hotel and then you come to us at the Ritz — it’s different,” said Klein, citing a famous quote by Ernest Hemingway: “When in Paris, the only reason not to stay at the Ritz is if you can’t afford it.”

A lot of that is down to the location, he said.

“Place Vendôme, historically, is a fantastic place and an exceptional luxury area. Look at what you have around here,” he said, making a subtle dig at the Hôtel de Crillon on nearby Place de la Concorde, which is still closed for renovations.

“Concorde is fine, but it’s already mass. It’s not private. Place Vendôme, if you want, you can close,” Klein argued. “It’s just beautiful, especially in the mornings. There’s no traffic, you know? When you walk out of the Ritz in summer, it’s heaven.”

Béatrice de Plinval, curator of the museum and archives at Chaumet and president of the Comité Vendôme, is another big fan of the square, designed by architect Jules Hardouin-Mansart to the glory of Louis XIV, the Sun King. Laid out in an octagonal shape, it is the inspiration behind the design of Chanel perfume bottles and watches.

“This architecture is so powerful. The square is enclosed, it’s in the heart of Paris and to me, it’s timeless,” said de Plinval, sitting in her office across from the Ritz.

She pointed out that the space is on the verge of another round of transformations.

Louis Vuitton, which already has a watch and jewelry store on the square, is building a flagship stretching from Place Vendôme to Rue Saint-Honoré, and the facade of the Hôtel de Coëtlogon, owned by the Sultan of Brunei, is due for a cleaning next year.

“Place Vendôme is evolving, with a much greater concentration of know-how. It’s no longer just brands and boutiques setting up on the square — it’s full-fledged luxury groups, because it gives them an absolutely clear legitimacy in terms of French excellence,” de Plinval observed.