Apple, with sales of more than $2,000 a square foot, is bringing its retail formula to the Meatpacking District here. 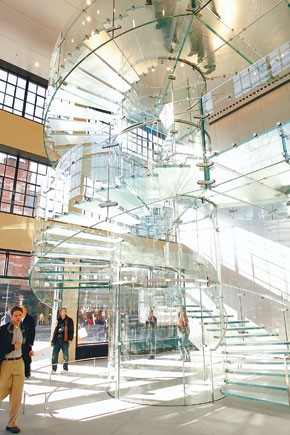 NEW YORK — Apple, with sales of more than $2,000 a square foot, is bringing its retail formula to the Meatpacking District here.

To hear Apple executives tell it, the recipe is simple: make products that people want to buy.

“Every Christmas has a different flavor in terms of when [consumers] shop and what they buy,” Ron Johnson, senior vice president of retail, said Thursday during a preview of the new store, which opens today at 401 West 14th Street. “The common denominator is that the most-wanted gifts get bought. The ones that are undistinguished are getting hurt.”

Featuring iPods, iPhones and Macs, Apple stores were visited by more than 100 million people and did about $4.2 billion in sales in the fiscal year that ended in September, an increase of almost 24 percent from $3.4 billion the previous year.

With 25,000 square feet of selling space, the West 14th Street store is Apple’s largest in New York City and the second-biggest in the U.S. after a unit on North Michigan Avenue in Chicago. The other Apple stores in Manhattan are at 767 Fifth Avenue and 103 Prince Street in SoHo.

The newest store is Apple’s first on three levels. A dramatic circular glass staircase leads from the main floor to the third level, which is entirely dedicated to service. A 46-foot Genius Bar — the longest in Apple’s retail chain — is staffed with technical experts who can assist 100 customers an hour. While the Fifth Avenue unit is open 24 hours, the Meatpacking District store will stay open every night until midnight.

Johnson said the store has the first Pro Labs, where customers can get free in-depth training on applications such as Final Cut Pro for filmmakers. “Who lives in this lower part of Manhattan?” Johnson said. “Creatives. They need a place to take their craft to the next level.”

In terms of service, a concierge team will help shoppers navigate the store. Appointments can be made with personal shoppers — a free service.

Apple’s ability to generate foot traffic may benefit neighbors such as Jeffrey New York, Alexander McQueen, Stella McCartney, Diane von Furstenberg and Hugo Boss, which is building a store next door to Apple.

In terms of the design, “We tried to really respect the neighborhood….With the Highline [railroad trestle being converted into a park] coming and a lot of development, we think we’re going to make the area better,” Johnson said.