The South Street Seaport is planning a sweeping redevelopment intended to transform the moderate-priced tourist mecca into a classier destination catering... 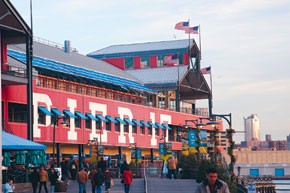 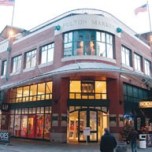 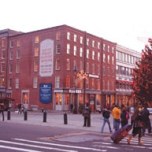 NEW YORK — The South Street Seaport is planning a sweeping redevelopment intended to transform the moderate-priced tourist mecca into a classier destination catering to the area’s fast-growing upscale residential population.

“We should be making an announcement within the next three to six months,” Janell Vaughan, general manager of the South Street Seaport, told WWD, confirming that big plans were afoot.

“Really, the primary objective of our whole redevelopment is to create a Seaport that’s relevant to the current community,” Vaughan added. “Since 9/11, a new whole community has moved in. The population growth rate from 2000 to 2015 is projected at 46 percent according to the Alliance for Downtown New York,” which is considered the country’s largest Business Improvement District.

According to Vaughan and other sources, the plans call for:

-Overhauling the retail mix and taking it upscale.

-Capitalizing on the spectacular views of the East River waterfront and the Brooklyn, Manhattan and Williamsburg Bridges just north.

-Creating a permanent food market to help fill the dearth of grocery options in lower Manhattan.

-Attracting a greater audience from Brooklyn and other parts of Manhattan by providing enhanced transportation via the East River.

-Redeveloping the Seaport’s former Fulton Fish Market space.”We are working with that space on a new concept,” Vaughan said.

One real estate source said the plan also entails leveling Pier 17 on the east side of South Street that juts out into the East River. It has the Seaport’s greatest concentration of shops and dining options, though its three-level metallic shed-like structure has become dated, and its retail offering is widely perceived as run-of-the-mill. There’s a predominance of familiar midtier brands such as Bath & Body Works, Lids, Sunglass Hut and Victoria’s Secret, as well as several kiosks selling key chains, silver jewelry, souvenirs and gloves. There are also fish restaurants, a food court and a few galleries.

Vaughan declined to comment on the fate of Pier 17 other than that making the Seaport relevant to the community “will mean a lot of different things. We aren’t prepared to release details yet.”

It is believed that General Growth Properties wants to move fast to attract upscale brands that otherwise could decide to go into the 500,000 square feet of retail envisioned in and around the World Trade Center in 2010.

“There will be retail changes,” Vaughan said, without elaborating much.

West of Pier 17, some better retailers, including J. Crew, Abercrombie & Fitch and Ann Taylor, have long been housed in the historic buildings of the Seaport, which include Schermerhorn Row, One Seaport Plaza and Museum Block, as well as the Fulton Market.

The South Street Seaport has 340,000 square feet of leasable space and thousands of square feet more of outdoor space for dining and street performers. There’s about 100 stores in total, but the retail capacity could change due to the redevelopment. There is also a maritime museum.

The Seaport is owned by the city, and General Growth Properties, the nation’s second-largest developer and a real estate investment trust, has the leasehold. The plans will be submitted to the city’s Economic Development Corp. as part of the multilayered approval process.

The Seaport dates back to the 1600s. Its heyday of commerce and immigration was around the 1850s. Thirty years ago, the former Rouse Corp. began restoring and redeveloping the Seaport, inspired by its history and other successful Rouse projects such as Faneuil Hall in Boston. The South Street Seaport opened in two phases. The historical side situated west of FDR Drive opened in 1983, and Pier 17 opened in 1985. In November 2004, General Growth acquired Rouse in the largest retail real estate merger in American history.

After the restoration, the Seaport’s retailers got off to a slow start, and since then, performance and traffic patterns have been inconsistent. The Seaport’s commercial side never quite gelled with the historic charm of its cobblestone streets, gas lamps and old ships — the Peking merchant vessel and the Ambrose lightship. The setting was also once a huge magnet for after-work socializing by the Wall Street crowd until the World Financial Center became the in spot.

“The Seaport area needs a new focus,” said Norman Roberts, partner in the Nakaoka Roberts interior design firm for high-end retail. “It’s not stimulating enough from a retail perspective. It doesn’t have the energy or excitement of the Meatpacking District or SoHo. It’s sort of contrived, and outside of tourists, I don’t think it has enough of a draw. There’s a midmarket mall feel that capitalizes on tourists and a little bit of downtown businessman traffic.

“They need to focus on its location, its views, its proximity to the Brooklyn Bridge. It is a prime spot for high-end residential hospitality, hotels and restaurants, and then you can bring in the better retail. In Manhattan, there’s not a lot of great waterfront property left [underdeveloped] that is a prime, high-end residential [area].”

Said one senior leasing official with a major developer: “The Seaport is a great opportunity for retail. It’s been an underperformer since Day One. The Seaport can play off the interest and commitments of luxury retailers that are coming to the area and can create some synergy with better retailers. I believe General Growth could be looking at the area as Manhattan’s third location for luxury players,” next to Midtown along Fifth and Madison Avenues, and SoHo.

The source noted that this year’s Tiffany and Hermès openings on Wall Street and Broad Street, respectively, short walks from the Seaport, has put the spotlight on the potential for luxury downtown. “The luxury in the immediate area gives them a story to tell. Once the residential starts to come in, then the world is your oyster. The retail, restaurant and service pieces definitely follow the residential.”

While subject to criticism, some retail mainstays weren’t complaining about the Seaport. “We do have a solid business there,” said Maria Sceppaguercio, Ann Taylor’s senior vice president of communications and investor relations. “It’s a decent store that caters both to the tourist shopper frequently as well as women who live and work in the area.”

“Our store does very well. It continues to generate strong returns,” said Abercrombie & Fitch’s Tom Lennox, vice president of communications. A&F has one of the Seaport’s best locations right off Fulton Street, where all the taxis stop.

Vaughan did highlight the Seaport’s opportunities. “It has 360-degree access. All of Brooklyn is literally a stone’s throw away,” she said. “There is tremendous opportunity to develop water traffic and almost look at the East River as a highway to our property. We are an anchor in lower Manhattan, and we feel we can define our neighborhood and anchor this side of the island on lower Manhattan. We are also right at the nexus to major city initiatives.”

She cited the East River Esplanade, a project in the planning stage with the EDC to develop the waterfront from the Battery Maritime Building, just north of the Staten Ferry Terminal, to Pier 40 near the Manhattan Bridge, and the Fulton Street corridor, where a new subway station is being built, and streetscaping and overhauling of underground utilities are under way. Both projects intersect at the Seaport.