Place-making takes time, even in a wealthy, touristy town like London.

LONDON — All year the streets of central London are teeming with British and international tourists — thanks partly to the weaker pound — Tube lines are bursting with commuters, and the skies are crowded with tower cranes hauling up the steel bones office complexes, apartment blocks and retail destinations.

Money continues to pour into central London in particular, with the retail-lined streets in and around Oxford and Piccadilly Circuses set to receive a 2.9 billion pound windfall from private, public and international investors by 2022.

Across the river, Battersea Power Station is set to form the centerpiece of a 9 billion-pound, mixed-use development that will span 42 acres when it’s finished. Apple plans to create a campus inside the station in 2021, and more than 250 retail spaces are planned.

Amid the buzz, difficulties continue to gnaw: U.K. consumer confidence remains low, and footfall is down across high streets, shopping centers and retail parks. There is much political and economic angst — a general election scheduled for Dec. 12, and worries over Brexit persist — while consumers are inclined to buy less due to growing environmental concerns. 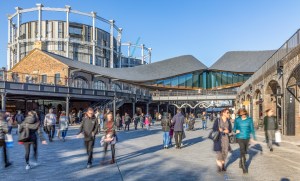 According to a report this week from Capgemini and YouGov, the British market research firm, U.K. shoppers place far more importance on sustainability than their global counterparts. Respondents in the U.K. also stated that sustainability was a key consideration when choosing where to shop.

In an environment full of contradictions — lots of money sloshing around, yet more cautious consumer spending — the neighborhood around King’s Cross and St. Pancras International train stations in London has been undergoing a multiyear, multibillion-pound facelift under the developers Argent.

The formerly rundown area has been gutted, cleaned and polished, and is now home to the new Central Saint Martins building and the London headquarters of Universal Music, LVMH Moët Hennessy Louis Vuitton and Havas.

A Google campus, and office complexes for Facebook, Sony and Nike are set to open on the 67-acre site, which will eventually be home to 80 new shops, 2,000 homes and 3.4 million square feet of new and refurbished office space in an area that was once a hub of drugs, prostitution and Nineties for dance clubs like The Cross.

As part of the building and refurbishing frenzy, developers have made ample room for retail, with Coal Drops Yard, the flagship project. The slick outdoor mall sits near Central Saint Martins and carries a mix of tech, beauty, luxury, men’s and women’s fashion, and interiors brands.

Shops tucked under the giant brick arches or lining the cobbled streets of Coal Drops range from British classics such as Paul Smith, Fred Perry and Miller Harris to European brands Cos, Superga and A.P.C. There are indie outlets, too, including Universal Works, Wolf & Badger, and the high-end charity shop Boutique by Shelter as well as a vast, experiential Samsung space.

Coal Drops opened a little over a year ago, and its progress has mirrored the current unstable environment. It has also been tricky for Coal Drops to get a clear read on its consumer base because the buildings and apartments are still a work-in-progress, which partially explains why footfall has been uneven over the past 12 months. The full King’s Cross development won’t be fully occupied until 2025 when 40,000 people are set to be living and working there. 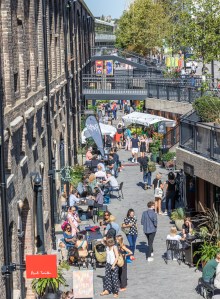 “The retail market is exceptionally challenging at the moment across the whole of London. That confidence to commit to, and to create, new stores when there is uncertainty at both a macro and a micro level, has meant that the sector as a whole is very challenging,” said Anthea Harries, Argent’s head of assets, and former head of the Crown Estate’s St. James’s commercial property portfolio in central London.

“What we’ve done is to create a niche retail mix, to give Coal Drops a point of difference within the retail sector of London. Consumers’ tastes and habits continue to evolve around shopping on and off-line, and physical stores continue to evolve. That means it’s quite tough to get the tenant mix right. We’re facing the same challenges, I suppose, as department stores in terms of bringing new brands in, and determining what the product range and the price range should be, and to make sure that we continue to evolve it in the face of a challenging consumer climate.”

Coal Drops is the largest retail proposition in King’s Cross, spanning 100,000 square feet and taking up one-fifth of the total retail within the new development. The entire King’s Cross scheme — with its multiple complexes and neighborhoods — is due to be completed in 2024 and there is even more retail planned as the entire site grows.

From the get-go, the Coal Drops retail strategy has been to balance “smaller, unique, independent, best-in-class retailers with more established brands, like Samsung and Paul Smith,” said Harries. “We only have 100,000 square feet, we only have 55 shops, so we’re small relative as a shopping destination. We were trying to create something that was unisex, accessible and open, and give people a reason to come to Coal Drops rather than a traditional high street.”

There has also been a big focus on personalization and experiences, with Superga hand-painting sneakers; Sacred Gold offering jewelry, piercing and tattoos, and Blackhorse Lane Ateliers, crafting — and repairing — jeans, jackets, bags and aprons out of selvedge and organic raw cotton denim. Samsung isn’t a store, but a vast space where visitors can test-drive a variety of new technology, have a coffee or even do a yoga class.

Julie Jones, director of direct-to-consumer at GLD Group, the U.K. license holder for brands including Superga, Umbro and K-Way, calls Coal Drops a premium lifestyle destination for those who “appreciate the collection of artisan retailers offering unique service propositions.”

Despite the tricky climate and the fact that the King’s Cross development is still being worked on, some of the strategies have been successful. Overall footfall is up 26 percent since it opened last October and Coal Drops is gearing up for a strong Christmas period, with a string of events planned at the stores and in the communal areas. 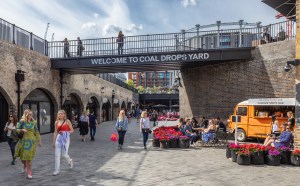 Harries — like nearly everyone in the commercial property sector — is taking the long view.

“The retail will take some time to embed: If we look at King’s Boulevard, where Space NK and the Nike (shop) are, that was a pretty desolate place two years ago and now it’s the main entrance into (Coal Drops). Footfall there has doubled in the last two years and, as a consequence so have sales. In reality Coal Drops will take 12 o 24 months to bed in. That that is in line with occupiers like Facebook arriving and Google occupying more buildings, as well as other tenants like Sony and Nike.”

Paul Smith plans to stay put despite the growing pains. “We see King’s Cross as a viable, revitalized area that Argent has been investing in over a long period of time. The area is, of course, a rail hub for national and international travel, but is now much more with a diverse mix of residential, business, education, entertainment, food and retail. While footfall has been slow, our shop is performing to expectation and we are waiting for the new marketing initiatives from Coal Drops Yard,” a spokesman for the company said.

There are big plans to push out the Coal Drops message nationally and internationally given its proximity to King’s Cross station — a gateway to the north of England and Scotland — and to nearby St Pancras International, British home of the Eurostar.

“It’s about taking the holistic view, waiting for things to bed in, and trying to adapt to consumer trends with physical spaces. We are taking a proactive approach because we feel that even though the retail proposition is small relative to size, it’s absolutely integral to the overall success of King’s Cross,” Harries said, adding that the stores need to up their game, too, if they want to succeed.

“In retail, there is an absolute need for physical stores, but it’s not just incumbent on us as landlords, it’s also incumbent on the brands themselves to make sure they are agile and have the ability to market themselves in a way that reaches those consumers. Create amazing shop fits, or host events or workshops — I think people are wanting to see more of that.”

Harries said Coal Drops is now focusing on its tourism and advertising strategy, targeting Asia and the Americas in particular, and working with local hotels and concierges. It also plans to relaunch the web site in the run-up to Christmas. By the end of January the site will be multilingual.

There are more plans to activate Coal Drops Yard’s physical spaces and add on concierge and VIP services, destination tours and partnerships with local hotels to drive awareness around the new neighborhood.