Retailers in New York City on Thursday got the break they’ve been long awaiting: indoor malls can reopen beginning Sept. 9.

However, the indoor malls will have restrictions. They can only operate at 50 percent capacity. There will be no indoor dining at the malls, and congregating and loitering in the malls is also prohibited. Masks and social distancing are required, and advanced air-filtration systems capable of reducing the spread of the COVID-19 virus must be operating.

Many people are fearful of venturing out and running the risk of being infected by the coronavirus, although New York City has done a good job at lowering its case rate this summer. The widespread testing, people generally adhering to social distancing, the flight to less densely populated suburbs and lockdowns helped the city keep its infection rate down.

Several retail executives have said that shopping during the pandemic has been very “mission-based,” meaning consumers who do show up at their stores often know precisely what they want to purchase beforehand, thereby limiting their browsing and interpersonal interaction. Conversion rates at reopened stores have been high, but actual sales are way down.

Foot traffic in the city’s indoor malls will be further kept down with none of the food courts operating. Indoor dining is still prohibited in New York City.

At certain malls, such as The Shops and Restaurants at Hudson Yards on the west side of midtown Manhattan, restaurants have been a major draw, more so than the retail stores. Also, Neiman Marcus, the Dallas-based luxury retailer soon to emerge from bankruptcy proceedings, will not reopen its store in Hudson Yards.

Around the country, stores that reopened in the spring, after temporarily shutting down in mid-March due to the pandemic, are generally experiencing better-than-expected foot traffic. Yet it’s still way off what it would be without the pandemic and dramatic drops in sales at the brick-and-mortar locations have been reported while online shopping has soared.

Freestanding stores on New York City streets will likely get a lift in shopper traffic as malls reopen around town. Macy’s Herald Square, for example, is just about a block away from the Manhattan Mall and three avenues from The Shops and Restaurants at Hudson Yards.

Also, many offices in the city that temporarily shut down due to the pandemic are reopening after Labor Day, bringing back thousands of workers to the boroughs and fueling some retail activity.

Cuomo also said Thursday that casinos in New York State could reopen on Sept. 9 but with no indoor dining. In New York State, indoor malls (excluding those in the New York City) reopened on July 10.
Meanwhile, the 3.3 million-square-foot American Dream mega-entertainment and retail complex in East Rutherford, N.J., will reopen on Oct. 1.

Among the American Dream’s components that will be operating are the DreamWorks Water Park, Nickelodeon Universe, Out of This World Mini Golf, the skating rink, and the Big Snow ski and snowboarding park, which opened on Tuesday. Lines starting forming about 90 minutes before the opening of Big Snow.

“We have a nice variety and diversity of retail opening Oct. 1, that we were planning to open last March 19 until everything happened,” said Ken Downing, chief creative officer of Triple Five Worldwide, referring to the pandemic outbreak. Triple Five is the developer of American Dream.

Back in March, some stores inside American Dream were still under construction. The delayed opening on Oct. 1 enables American Dream to unveil a retail array with a larger contingent of stores ready to do business, making for a more impressive shopping experience, Downing said.

He also said American Dream could have launched its retail component on June 29 when New Jersey Gov. Phil Murphy green-lighted the reopening of New Jersey indoor malls. But the American Dream team decided to hold off on launching retail until the indoor parks could open as well, to create a much greater impression on the guests.

“For the success of our retailers and parks, and to really deliver the entire American Dream experience, it was so important to Don Ghermezian [co-chief executive officer of American Dream] and his family that American Dream opened complete,” said Downing.

The parks were restricted from opening until last week when Murphy gave the nod. The indoor parks can open next month with 25 percent capacity, which means 750 to 1,000 people maximum at a time per park.

Retailers will also operate at limited capacity, depending on the square footage of the individual stores.

American Dream’s Coca-Cola Eats food hall is also opening Oct. 1. In the food hall and in common areas, Downing said tables and chairs have been removed to accommodate social distancing and to discourage large groups.

No date for the opening of American Dream’s luxury retail wing, which will include a Saks Fifth Avenue, has been determined yet, but it won’t happen this year.

A replacement (or replacements) for Barneys New York, which agreed to open a store but went bankrupt and was liquidated, has not been revealed. Barneys was to take 50,000 square feet.

Hermès, Tiffany, Moncler, Dolce & Gabbana and Watches of Switzerland are among the other luxury brands planning stores at American Dream.

Downing said a number of luxury retail leases are out but can’t be announced until they’re signed.

In October 2019, American Dream did open some of its entertainment components, including Big Snow. The center drew some good-sized crowds at that point. However, on March 17, American Dream closed to the public due to the pandemic.

American Dream is owned by the Canadian conglomerate Triple Five, which operates the two largest shopping centers in North America — West Edmonton Mall in Canada and Mall of America in Bloomington, Minn. Both feature major entertainment components, like American Dream.

Malls, particularly enclosed malls, have been severely impacted by the pandemic. People are reluctant to enter indoor spaces and be near other people for fear of contracting the disease. High unemployment, retail bankruptcies and store closings have further hurt business at malls.

Mark Ghermezian, co-chief executive officer of American Dream, said in a statement Thursday, “We know that our community has been waiting to return, but it was important to us that we took the proper time and precautions needed to welcome guests back in the safest possible manner.
“The last several months have been difficult for everyone, and even though we are still adjusting to the new normal, we are confident that we can provide guests a safer environment to make dreams come true for everyone, everywhere, as well as create much need job opportunities in New Jersey.”

American Dream is requiring everyone to wear face masks, in addition to operating at reduced capacities. There will be increased sanitizing and disinfecting, and hand sanitizers and hygiene reminders will be throughout the property. The center will also have physical distancing guidance presented with physical and digital signage, ground markings, and plexiglass barriers.

The center is encouraging visitors to book visits in advance.

American Dream provides thousands of jobs and millions of dollars of economic impact to the region, according to Jim Kirkos, president and ceo of the Meadowlands Chamber of Commerce. “New Jersey needs American Dream to help revive its economy in a post-COVID-19 era,” said Kirkos.

“There’s a real passion for this project in the community,” added Downing. 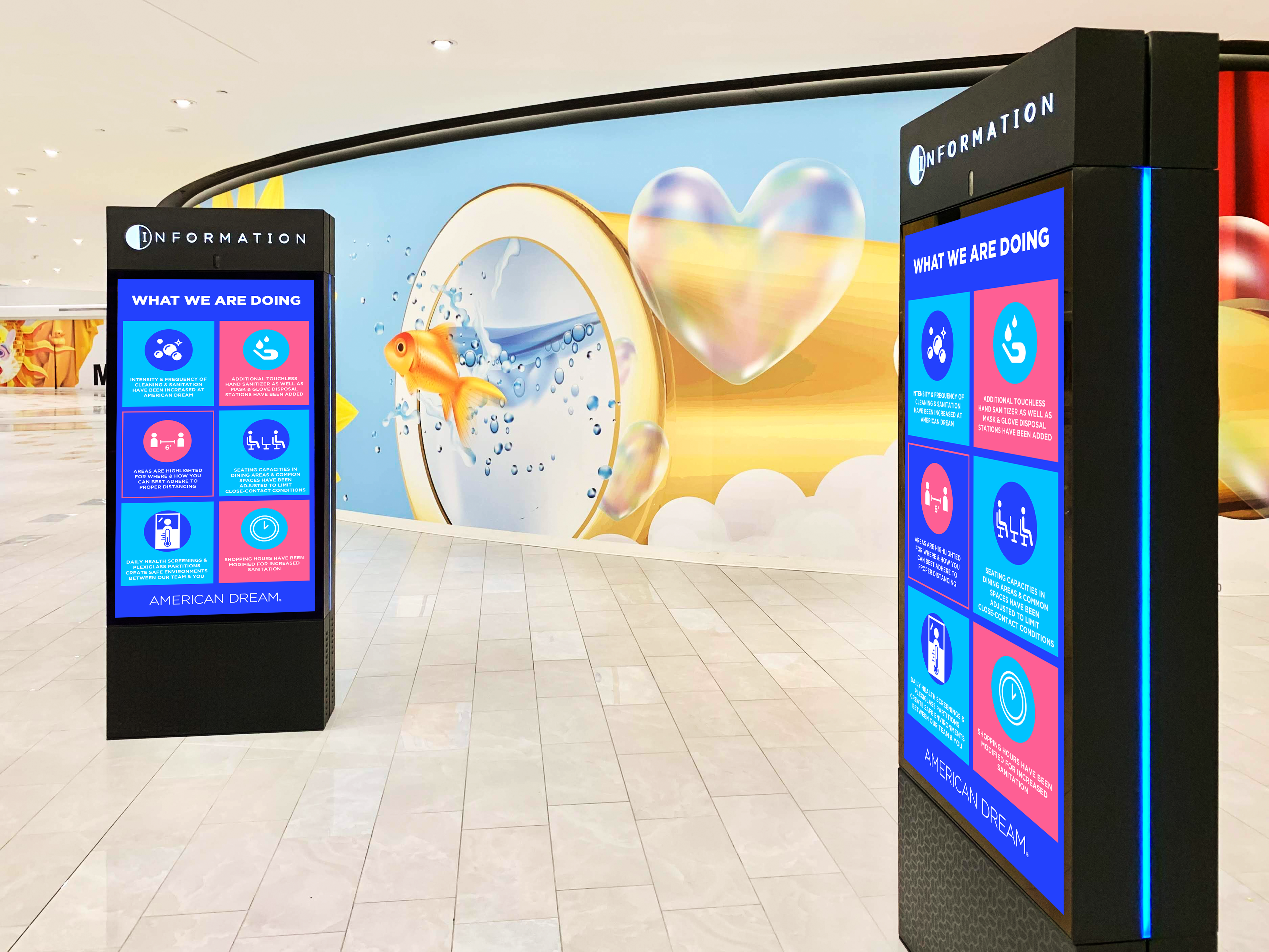