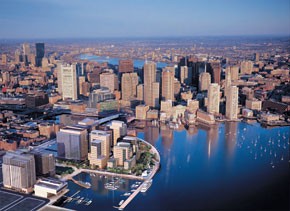 BOSTON — As soon as flounder mating season is over this spring, dredging will begin at the South Boston waterfront on deepwater piers to dock luxury yachts.

The gritty, traditionally Irish enclave — the “Southie” depicted in films like “Good Will Hunting” and “The Departed” — is shedding its roughneck ways.

Mixed-use developments feature retail as a major component, and a total of more than 2.5 million feet of retail space is slated for an area without so much as a Gap store.

With construction cost estimates topping $7 billion and spanning more than 64 acres, the projects would reinvent the South Boston waterfront over the next decade. They are intended to create a new district from what are now parking lots, former rail yards and dilapidated warehouses.

The enterprise is believed to be bigger than any other construction project in the core of a U.S. city, except the rebuilding in hurricane-ravaged New Orleans.

“All of these sites have changed hands within the last three years,” said Tom DeSimone, a partner in W/S Development Associates, one of the firms behind the Seaport Square project, 23 acres slated to become 12 new city blocks. “You now have a group of entities or people who control the land who are very focused on development.” After decades of stagnation, “the new deals place a financial impetus to develop the land to its best and highest use.”

The projects run north from Pier Four to Fort Point Channel, a narrow waterway that divides Southie from downtown. Marketed as a new Seaport District, most construction is slated to be complete by 2012.

Barbara Lynch, a renowned chef who grew up with eight siblings in a notorious South Boston public housing project and now owns several restaurants, said time has finally caught up to Southie.

“You can’t stop evolution,” she said, sitting in the kitchen of a model condominium unit in a former wool merchant’s building that is being converted to luxury lofts. On the ground floor, crews are building an estimated $6 million restaurant complex for her. “It was 30 years of desolation and nothing happening. Now this will bring tons of jobs in and be great for the city.”

The Big Dig, a major tunnel and highway project, extended the Massachusetts Turnpike into South Boston, and a Metropolitan Boston Transit Authority bus line extension, which began running in 2004, alleviated the perception of Southie as an isolated backwater. Young professionals, priced out of center city neighborhoods, rode a wave of condo conversions into Southie.

Their presence has diversified the close-knit neighborhood where the Irish crime faction the Winter Hill Gang once ruled and where rioting broke out in the early Seventies when a federal court ordered schools to be integrated by busing white students to predominantly African-American Roxbury, and vice versa.

Now many of Southie’s signature triple-deckers (a three-unit Victorian housing style) have interiors outfitted with the accoutrements of affluence, including those of the granite-and-stainless-steel kitchen variety. The median condo price rose 5 percent, to $365,000, last year and is up 34 percent in the last five years.

There has been some grumbling about gentrification driving old families out of the neighborhood and an association has been formed to preserve affordable housing.

However, Southie’s essential DNA is intact. There are dark, beer-scented taverns on many corners and piers where fresh fish is processed. The Bugaboo stroller set has arrived, but Starbucks hasn’t. In the next decade however, with the current pace of condo conversions and remodeling of former rectories and family triple-deckers, Southie will likely become a sanitized version of itself.

For now, though, some parking squabbles still result in slashed tires. On Broadway, the commercial main drag, the tentative coexistence between old and new is evident. There’s Habit, a boutique selling designer jeans, a door down from Calnan’s, which sells Scally caps (a wool-tweed newsboy cap) and Shamrock-embroidered buntings.

“It’s such a young neighborhood now,” said Tim Collins, a DJ and restaurateur who recently bought a house in Southie. A plaque reading “Flanagan” still hangs outside, a remnant of previous owners who followed Southie’s tradition of putting up the family name. “My neighbor has been there for four generations and she was remarking on how it’s all [double income] couples now.”

In the Seaport District, there already is a new convention center, a Star Trek-esque affair with an elliptical, overhanging roof. The Institute of Contemporary Art opened in 2006, under the city’s stipulation for a public-use component to Fan Pier. Ferragamo sponsored the museum’s first anniversary gala in December.

Many believe Fan Pier’s sale was a turning point. After an inheritance feud lasting years, the billionaire Pritzker family sold Fan Pier in 2005 for $115 million to developer and Boston native Joseph Fallon. The triangular parcel is considered a linchpin to waterfront renewal.

“The day I bought it, I started thinking about design and convenience for Boston,” he said.

Boston has narrow, off-kilter streets laid down over former cow paths, and Fallon hopes to bring the amenities of master-planned cities to Fan Pier, which will have midrise buildings with lots of glass, ocean views and, at the waterfront, a 4.5-acre park, bike trail and marina with spaces for 96 boats.

Sixteen of these will be “Mediterranean style” to accommodate tri-deck yachts. He is seeking Leadership in Energy and Environmental Design (LEED) certification, a green building standard for environmental and energy efficiency, on the entire project.

About 300,000 square feet is earmarked for retail and restaurants opening in 2012.

Fallon said the marina and the views — a panorama from the inner harbor out to planes taking off from Logan Airport — will help lure the crème de la crème. (Last summer, he tethered a hot air balloon to the site and allowed prospective tenants to ride up to various “floors” to gauge the view.)

Fallon has 1,200 people on a waiting list for the residences; many are from abroad and want to buy while the dollar is weak.

Behind Fan Pier sits Seaport Square, a 23-acre, L-shaped parcel that will have 1.5 million square feet of retail and 4.5 million square feet for offices, residences, hotels and community uses. The project aims to be a self-sufficient neighborhood, with its own private school. Where Fan Pier sees itself hosting luxury businesses in small spaces, Seaport wants a more pedestrian mix of mall apparel chains, food stores and big boxes.

Retail won’t begin opening until 2011; no deals are signed.

Developers acknowledge that plans are very aggressive. But they also say this part of the city has a pent-up demand. There is no movie theater in Southie, for example, meaning residents must travel halfway across the city to the Boston Common Theater.

DeSimone of W/S Development isn’t particularly concerned about a recession or that Boston, in the midst of a building surge, will have too much space and lagging demand.

“With a project of this size, you can’t time the market,” he said. “You’ll be building in good cycles and flat cycles.”

In addition to Fan Pier and Seaport Square, there is Waterside Place, a 1.1 million- square-foot complex to be built on 11 acres next to the Boston Convention & Exhibition Center. The Drew Co. and its partner, Vornado Realty Trust, declined comment. Waterside Place is earmarked as 640,000 square feet of retail, with two major anchors and smaller stores over three floors. Nordstrom had been courted as an anchor in the project’s early stages. The Seattle-based retailer declined comment.

There’s also the Pier Four project, next to Fan Pier, which calls for razing a seafood restaurant and turning its huge parking lot into 1 million square feet of mixed-use space.

Developer Stephen Karp, who has permits to begin construction on Pier Four, told Boston magazine in July he is taking a wait-and-see approach. Karp built many of Boston’s regional malls and sold them to Simon Property Group in the Nineties.

Much of the planned construction is being built without signed leases, a riskier method for developers.

Chef Lynch, already one of Southie’s long-odds winners, is in that camp.

She was bused to high school in Roxbury. Unhappy, Lynch cut every class except home economics, where she learned to cook. “I figured because people always had to eat, it was a business I should learn,” she said

During restless teen years in Southie, she would wander down to the Fort Point Channel area and admire the 19th-century buildings. It is in one of those buildings, on Congress Street, that Lynch will launch a restaurant anchor for FP3, a 97-unit luxury loft project that opens this spring.

Berkeley Investments bought about a dozen of the brick buildings and is proceeding with office and residential conversions, with ground-floor retail. Several smaller developers also are active, with a collective vision of a new micro-neighborhood around the channel.

When Lynch met with South Boston’s review board to get her liquor licenses for the restaurants in FP3, they had a simple message for her.