The shopping center opens after years of controversy against a backdrop of slowing tourism in Paris. 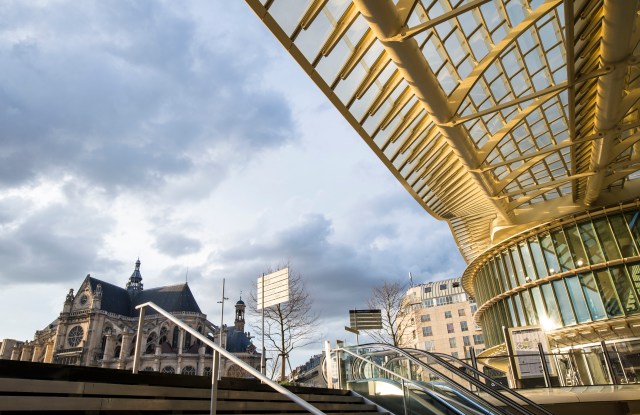 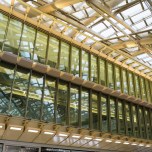 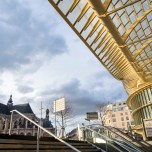 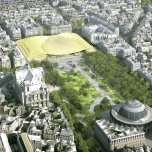 Hidalgo was joined by Christophe Cuvillier, chief executive officer of property developer Unibail-Rodamco, at the event, which ended with a pyrotechnic display that filled the air with thick smoke. In her speech, and the press conference that preceded it, she acknowledged the difficulties that have beset the project.

“It is no coincidence that this location has always been a source of debate, controversy, discussions and quarrels. It is no coincidence, because it is the belly of Paris, an exceptional city that shines and that pushes everyone to seek the best or to exert their influence,” she said.

“Parisians are demanding. As I said, they like controversy, debate, rows, not to mention slanging matches,” Hidalgo added. “We got it all, but that’s the way it is — that’s Paris, and it forces us to be even better.”

The mayor defended the much-criticized color of the canopy — a sandy yellow with textured glass panels that cast a light designed to mimic sunlight filtered through treetops — and the budget, which spiraled to 918 million euros, or $1.04 billion at current exchange, including 238 million euros, or $271 million.

“I think the color is magnificent and I take responsibility for the cost — 14 percent above initial estimations,” she said.

The mall opens at a turbulent time for Paris, which has seen tourism drop sharply in the wake of November’s terrorist attacks on the city. Economic indicators are mixed, with consumer spending rising in the first two months of the year, but private sector activity unchanged in March.

Hidalgo said she is confident the Forum des Halles, through which 750,000 people pass daily, would attract not only locals — thanks to a new supermarket, gourmet groceries and hip restaurants — but also tourists.

“In terms of tourism, this place will be attractive because it is beautiful, powerful and original. It reflects Paris,” she said. “Of course, security is a crucial component.” The site is patrolled by a special brigade of 25 police officers and 500 video cameras — directly linked to police headquarters — that monitor activity at the mall.

The refurbished shopping center includes an additional 161,500 square feet of selling space, as reported. The canopy, designed by Paris-based architects Patrick Berger and Jacques Anziutti, houses 64,500 square feet of retail space. It is home to 18 stores, including Nike, Superdry, Lego and Sephora. The latter is only the second Sephora store in Paris to feature a skin-care bar, after the flagship on Avenue des Champs-Élysées.

There is also a 3,000-square-foot concept store called L’Exception dedicated to upstart labels, the brainchild of Régis Pennel, founder of the online store of the same name that specializes in French brands including Kenzo, Carven and Maison Kitsuné.

In all, there are 35 newcomers including Sandro, Claudie Pierlot, Lacoste, Aigle, Calvin Klein Underwear and backpacks label Herschel, plus convenience store Monoprix, which will open next year.

Alexis Véron, director of the mall, said much work had been done to open up the space, which in the Seventies was an enormous open pit, earning it the nickname “le trou des Halles” — literally “the hole of the Halles.” Inaugurated in 1979, the Forum des Halles rapidly gained a reputation as a murky labyrinth.

“This represents a real revolution for the Forum des Halles, as it is now open onto the city and onto neighboring streets via this pedestrian zone, but also via the subway and regional train station, with the addition of five new entrances,” Véron noted.

Unibail-Rodamco expects footfall to rise to 40 million visitors a year by early 2018, versus an average of 35 million to 37 million before the renovation, which would make it the second-busiest shopping mall in continental Europe after Les Quatre Temps in the business district of La Défense, which drew 46 million visitors in 2015.

Among the coming attractions is Champeaux, a brasserie by Alain Ducasse with a stunning view on the Church of Saint-Eustache, set to open April 11. It’s one of two restaurants under the canopy alongside Za, a hip bistro designed by Philippe Starck.

Existing stores are being refurbished, too. For example, the H&M unit is set to reopen this summer covering four floors instead of three, and will include the H&M Home concept, while Bershka will be on two floors, doubling its square footage.

The shopping center will be home to a total of 150 stores, versus 115 before. It will open on Sundays, beginning this weekend.

The Forum des Halles also houses several cultural spaces, including a music conservatory, multimedia library and La Place, a new association dedicated to hip-hop culture that is headed by designer Agnès Troublé, aka Agnès b., who has partially financed the space.