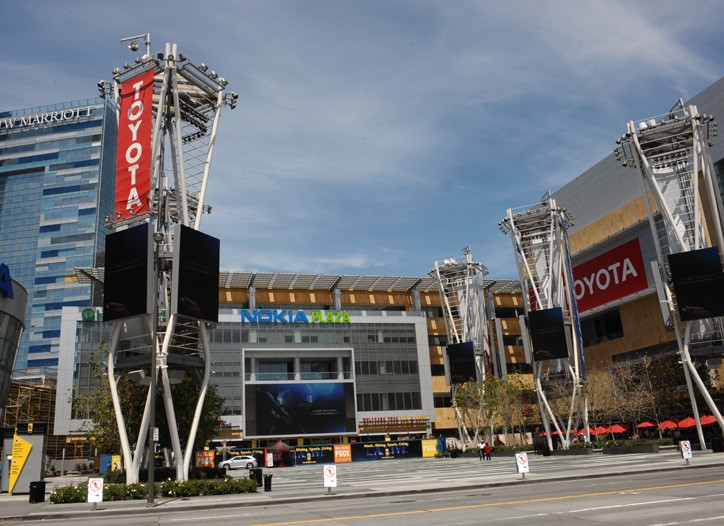 LOS ANGELES — The recession has crashed the downtown party conceived for this car-obsessed city, short-circuiting a major push for retail.

A few years ago, visions of a bustling, around-the-clock downtown danced in the heads of developers and government officials. Now, despite pockets of progress, financial struggles have created obstacles to retail and residential projects crucial to making downtown a walkable, mixed-use destination and home instead of a stopover for commuters.

The $3 billion Grand Avenue Project developed by Related Cos. of New York has been touted as a cornerstone of the new downtown. The company’s Web site describes it as the heralding  of “a new era in Los Angeles.”

The new era, however, won’t arrive until at least three years behind schedule, in 2012. That’s when the first phase, including a hotel, 500 housing units and 285,000 square feet of retail space, is forecast to be finished.

There are other trouble spots.

The biggest downtown landlord, Meruelo Maddux Properties Inc., owner of 28 rental and 19 development projects in the area, filed for Chapter 11 in March, because of the challenging economic climate. A bankruptcy filing also sidelined the $165 million Chinatown Blossom Plaza apartment and retail complex.

Retailing suffered another setback this year when Macy’s 123,000-square-foot store closed at the 7 + Fig shopping center, which is owned by Brookfield Properties Corp.

Citing independent retailers seeking “to go into downtown and take their shot,” City Councilwoman Jan Perry, who represents the area, said: “The renaissance will still move forward, but we may have to change our definition. It may have to take place on a block-by-block basis with people coming in with new ideas [and] smaller-scale projects.”

The desire for retail among downtown residents is strong. A study released this month by the Downtown Center Business Improvement District found that a majority of residents said they want a chain such as Target, a specialty store like Gap or Banana Republic and a multiline store such as Macy’s or Nordstrom. But in a period of store closings and retrenchment, the likelihood of expansion has dimmed.

“What it is going to take is for us in the real estate community to go to the retail tenants and ask them to take the plunge and risk with us” for the long term, said Hal Bastian, the BID’S senior vice president and director of economic development.

Merchants, however, have not been persuaded there is a critical mass of full-time downtown residents. “The national retailers do not accept those numbers; they don’t feel it is an unbiased survey,” said CB Richard Ellis senior vice president Mark Tarczynski, adding they rely on 2000 census figures estimating downtown’s population at 6,000.

In addition, potential locations often are oddly shaped, not big enough, lack parking or loading space. As retailers cut back, those hurdles become tougher to jump over. “These guys are looking at location opportunities where they can just plop their footprint down with no fuss,” Tarczynski said. “Doing an urban store is a very difficult proposition.”

But he predicted a downtown Target “will be here soon enough,” although a spokeswoman for the chain said the retailer has no immediate plans.

Mayor Antonio Villaraigosa has put his weight behind downtown’s expansion even as the city struggles with rising budget deficits. Within downtown, Villaraigosa has been active in securing convention center hotels and promoting the Grand Avenue Project, which is receiving $100 million in government redevelopment funds.

Bert Dezzutti, Southern California senior vice president of Brookfield, said an announcement would likely be made within six months about retailers entering the space. “We have folks that would take 30,000- to 40,000-square-foot chunks,” he said, adding that Brookfield is spending $3 million on improvements at the 7 + Fig center.

The chairman of Beverly Hills development company Astani Enterprises Inc., Sonny Astani, is familiar with the challenges of operating in the soft market. The first phase of his Concerto project, consists of two residential towers and a loft building that will begin to take in residents in June. But tenants will pay far less than Astani originally anticipated. A unit priced at $400,000 was expected to fetch $600,000, and a $575,000 unit had been pegged at $750,000 to $800,000, he said.

Ultimately, Astani believes downtown will pay dividends. “The bones are all there,” he said. “We are getting to the inflection point.”

About 14 percent of downtown residential apartments were vacant in the fourth quarter of last year, compared with 3.4 percent the year before, said Delores Conway, director of the Casden Real Estate Economics Forecast at the USC Lusk Center for Real Estate. She attributed the rise to new residential offerings at the end of last year and more leasing of condos as apartments.

To be sure, downtown teems with activity that was almost inconceivable a decade ago, when the Staples Center, home of the NBA’s Lakers and Clippers and the NHL’s Kings, was unveiled. The first phase of the neighboring $3 billion L.A. Live, an entertainment venue, which includes theaters and dining was completed in 2007 with the Nokia Theatre. Phase-two additions that have opened include ESPN’s West Coast outpost, the Grammy Museum, a bowling alley and restaurants. A movie theater, a Ritz-Carlton hotel and residences, as well as a JW Marriott are yet to come.

The Frank Gehry-designed Walt Disney Concert Hall features a 2,265-seat auditorium and two outdoor amphitheaters and has given downtown renewed cultural and architectural gravitas since opening in 2003.

“You have the danger of people moving downtown, having bought into some hype, and then moving away,” said Eric Richardson, editor of the local Web site, Blogdowntown. “We are not seeing that. We are seeing people sticking downtown.”

In the five years since the Historic Downtown L.A. Retail Project organization was created by the city, project manager Audrey Madrigal said it has aided 50 downtown retail businesses get started. The majority have been restaurants and cocktail lounges averaging 1,000 to 2,000 square feet.

Marty Shelton, vice president of urban development at NAI Capital, said the downtown retail vacancy rate at the end of last year was 5 percent, but has probably inched up since then.

The single biggest retail victory for downtown of late has been Ralph’s Fresh Fare supermarket, which opened in 2007 after years of lobbying. Tarczynski of CB Richard Ellis, who was influential in the Ralph’s deal, said the location was recording gross sales “upward of $750,000” weekly compared with an expected $300,000.

The Historic Downtown neighborhood offers a model for retail not dependent on national brands. The area is bordered roughly by Hill and Main streets on the west and east, and 3rd and 9th streets on the north and south. A critical element in its transformation from a district where crime and drugs flourished is an adaptive reuse ordinance adopted in 1999, which paved the way for the conversion of unused offices to residential units.

As residents began to trickle in upon the completion of stylish lofts, low rents compelled entrepreneurs to take notice. Gallery owners were among the earliest. One of them, Bert Green, opened his namesake space in 2004 and paid 30 cents a square foot. The galleries gave rise to an Artwalk that has become a magnet for thousands on the second Thursday of every month. “A lot of the boosters thought it would be a two-year to five-year process, but we have 10 years before we get there,” Green said, referring to firmly establishing the downtown neighborhood.

Apparel stores are popping up in the area. San Francisco-based Upper Playground, which sells T-shirts decorated by artists, opened in Historic Downtown last May because it fit the nine-store chain’s urban attitude.

This month, Los Angeles-based brands Ed Hardy and Skin.Graft launched stores in Historic Downtown. Skin.Graft designer Jonny Cota said the area’s “combination of art and grunginess” appealed to him. “It is still a little scary, but you can do respectable things. “We made the move feeling confident that we would be able to bring our own customers here.”

Frances Giles, store manager Ed Hardy’s downtown outlet, acknowledged the brand doesn’t quite know the demographic for the store yet and will test different deals and events to pull in customers. “We are in a neighborhood that is definitely on the cusp,” she said. “We are willing to put in the time and effort to stick it out.”