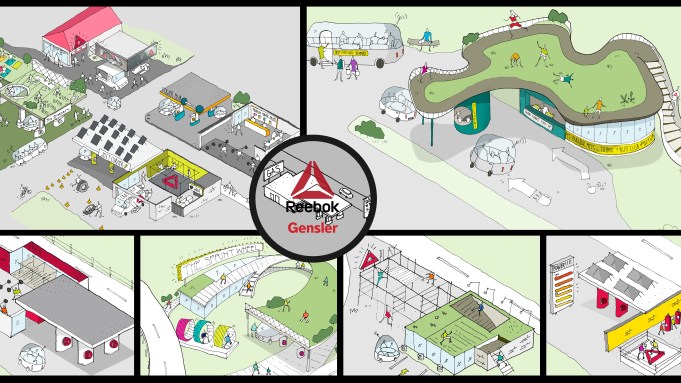 Reebok is looking ahead to 2030 and wants to start a grassroots campaign to repurpose gas stations into gyms.

The athletic footwear and apparel firm partnered with architectural design firm Gensler to create three concepts — Network, Oasis and Community Center — that could serve as blueprints for future gym projects. The idea is still in the conceptual stage, so there isn’t any determination yet of who would pay for the redevelopment of the space.

John Lynch, vice president and head of marketing in the U.S., said: “Reebok is really, really into fitness. It’s what our people here at Reebok think about day in and day out….The world is moving to electronic vehicles, or autonomous vehicles, really rapidly. We think there will be 260 million autonomous vehicles in 2030. The world is changing very quickly and dramatically and we are thinking about all these spaces with gas stations everywhere and what do we do with that space.”

Lynch said the company wanted to start the conversations now because the “future is closer than you think.” If any of the three gym concepts become a reality — and that’s a big if — Reebok would meet its goal of being a change agent, adapting existing spaces and fostering the creation of “wellness centers” to address both mental and physical fitness. The ideal center would house a “healthy” restaurant or juice bar and incorporate space for selling Reebok products.

Thinking in new ways about how consumers are living has become a common theme in retail. As consumers shift their shopping habits, more retailers are rethinking their footprints and malls are looking at what to do with stores that have gone dark. Overseas, Lululemon Athletica and Alibaba have had talks about the retail infrastructure in China and how Lululemon could play a new role, perhaps through an area for yoga classes in mall’s experiences and services space.

Brands in turn have been looking at alternative retail spaces to sell goods. Pop-up shops have been sprouting up as a way to market brands locally, but without a lengthy store lease and the associated costs. More recently, vending machines have been viewed as a viable option to sell more than just snacks and soda. Street culture festival operator Sole DXB in December used vending machines to sell select fashion merchandise at its annual festival in Dubai, and luxury jewelry designer Maria Aaron has been selling her designs via a vending machine — a fully integrated touchscreen with video capabilities for items between $100 to $1,500 — at the Brooklyn Museum.

Reebok was early to the idea of using vending machines to sell fashion, selling its Travel Trainer sneakers at select locations in New York and San Francisco in 2004. But this time around Reebok is thinking bigger, and hoping to spur conversations that, at the very least, will center on creating accessible fitness centers for the population at large.

Arlyn Vogelmann, principal and studio director at Gensler who worked with Reebok, said her firm looked at the project from a “fitness and urban design and experience point of view” that included consumer commutation and use patterns. The three concepts each target a different use pattern. The Oasis fits a thruway footprint, where there’s room for people taking a spin class to recharge their cars. The Community Center is more targeted to the “clover leaf” format, areas that combine four different corners of an exit ramp with each one targeting a specific activity. She also spoke about local hubs that could support the neighboring community, as well as areas where commuter vans shuttle commuters into urban centers — San Francisco already has this through its park and ride centers.

Gensler’s London office has worked on similar projects that include adaptive reusing of space in former tube stations, as well as waterfront redevelopment on the River Thames.

“Sometimes you have an idea and then get the city government and city planners involved. Sometimes the idea takes on its own life. Sometimes it’s about starting the conversation on a great idea, and then figuring out the [outreach to] community stakeholders. Ideas [such as the concept with Reebok can become] a catalyst for other urban revitalization projects within our cities,” Vogelmann said.