Fresh off the opening of Hudson Yards last month, Related continues its development momentum with a major new investment into West Palm Beach.

Related Cos. plans to invest $550 million over the next five years to transform CityPlace in downtown West Palm Beach, Fla., from a lifestyle center to an urban environment being renamed “Rosemary Square.”

Related’s investment in West Palm Beach dates back 20 years to when the developer launched CityPlace, which has helped spur the area’s population growth, office development and tourism. According to Related, West Palm Beach has seen 20 percent employment growth over the last seven years.

“CityPlace was one of the first lifestyle centers in the country, but it’s in the middle of a city. Over its 20-year history, the city has evolved and grown around it so we found it appropriate to pivot to Rosemary Square,” Gopal Rajegowda, senior vice president of Related Cos., told WWD.

“We have been evolving CityPlace, investing in the district and pivoting more to an exciting urban neighborhood,” Rajegowda said.

Past additions by Related to CityPlace and the surrounding neighborhood include an RH Gallery; a Hilton West Palm Beach connected to the Palm Beach Convention Center; The Regional bistro, and the CityPlace Office Tower. Those additions amounted to another $200 million investment by Related.

Related has been involved in the district’s master plan, excluding some public components such as the convention center and the Kravis Center for the Performing Arts.

“Related has both a proven history developing dynamic neighborhoods that foster culture, commerce and community, and a long-term commitment to West Palm Beach,” said Keith James, the mayor of West Palm Beach. “Their investment, vision and local ties bring the density and offerings to accelerate economic energy in the city.”

“In the 20 years since we developed CityPlace, we’ve witnessed both incredible growth in West Palm Beach and a global renaissance of dynamic urban neighborhoods,” added Kenneth A. Himmel, president and chief executive officer of Related Urban, the mixed-use division of Related Cos. “Our plans for Rosemary Square reflect the way people live, work and travel, and fulfill the desire to spend time in places with shopping, dining and cultural experiences all within a short walk.”

“Our vision for downtown West Palm Beach is to create a sense of place with energy and culture that extends well beyond the boundaries of Rosemary Square,” said Stephen M. Ross, chairman of Related Cos.

This year,  Related is creating green spaces and outdoor public venues, a 300,000-square-foot LEED Gold office building, and an array of dining and shopping offerings, including a True Food Kitchen for health-minded and seasonally inspired fare by Dr. Andrew Weil; High Dive seafood serving locally sourced fish and produce, and Barrio Sangria Bar. Also later this year, Sur La Table will unveil a retail and cooking school and an interactive “social sculpture” created by Danish artist Jeppe Hein with rooms created by vertical columns of water, will be installed. There are also large murals displayed around the neighborhood.

Over the next five years, a 21-story LEED Gold mixed-use tower with luxury residences and commercial space, as well as a second hotel adjacent to the Hilton West Palm Beach, will be added.

Related has already created a “Main Street” on Rosemary Avenue between Okeechobee Boulevard and Hibiscus Street with wider, curb-less sidewalks and  landscaping suggesting a European town square. It’s conducive to closing down traffic for special events. Later this year, the stretch from Hibiscus to Fern Streets along Rosemary Avenue will be revitalized, completing the half-mile connection to the rest of downtown.

Related’s other large-scale mixed-use developments include Hudson Yards and Time Warner Center in New York City; The Grand in downtown Los Angeles; the planned Related Santa Clara in Northern California; The 78 in Chicago, and Brent Cross South and Tottenham Hale in London. 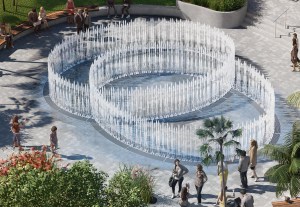 Rendering of the Water Pavilion in Rosemary Square