For De Beers, it's about time. The diamond jewelry firm has launched its first watch collection in De Beers stores after two years in development. 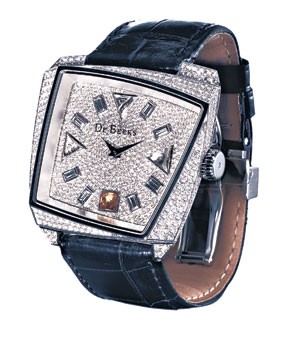 For De Beers, it’s about time.

The diamond jewelry firm has launched its first watch collection in De Beers stores after two years in development.

Unlike the Swiss watch powerhouses, De Beers has incorporated rough diamonds into its timepieces.

“This is obviously about diamonds,” chief executive officer Guy Leymarie said. “We wanted to do something more niche, more specific, more about De Beers’ identity.”

Leymarie anticipates that the watch business will eventually account for 5 to 10 percent of the company’s sales.

The watches are Swiss-made in the same factory that creates timepieces for Chanel, Cartier and Vacheron Constantin, Leymarie said.

The first collection, designed by creative director Raphaele Canot, is inspired by the company’s best-selling and widely advertised Talisman collection that features medallions and other jewelry styles with rough diamonds.

There are two case shapes and eight models. The Talisman 8 watch is an octahedron, echoing the makeup of a diamond. There are four rough diamond markers on the guillochet dial, with options for a pavé diamond case and different colors of gold, such as white or rose gold. The watches are suited for male and female wearers.

The Talisman Suntime Watch is untraditional, resembling a sundial with a white gold dial, diamond baguette markers and a rough diamond at center. It has automatic movement with a power reserve of 42 hours.

The watches will retail at De Beers’ five U.S. stores, including New York, Los Angeles and Houston. They also will be sold at its 17 international units, among them London, Paris, Dubai and Tokyo. There are no plans to wholesale the watches.

“We have to start with a bit of intimacy and awareness,” Leymarie said. “De Beers is a diamond destination. We have only diamond jewelry. Watches are not per se a diamond specification.”

The watch collection, though unisex, may help De Beers open itself up to more male customers. More than ever, diamond jewelry companies are aiming to offer their male clients something for themselves, since more often than not it’s men who make big diamond jewelry purchases. Harry Winston recently tapped men’s wear designer Thom Browne to create a men’s jewelry collection, and De Beers picked British jewelry designer Stephen Webster to create a fashion-forward collection of belt buckles, brooches, pendants and cuff links for men.

Last month, De Beers opened a store in Tysons Galleria in McLean, Va., which has already sold a few timepieces.

Up next for De Beers are stores in San Francisco, Dallas and Boca Raton, Fla.; two units in Moscow; a Hong Kong store, and a flagship in Tokyo’s Ginza.