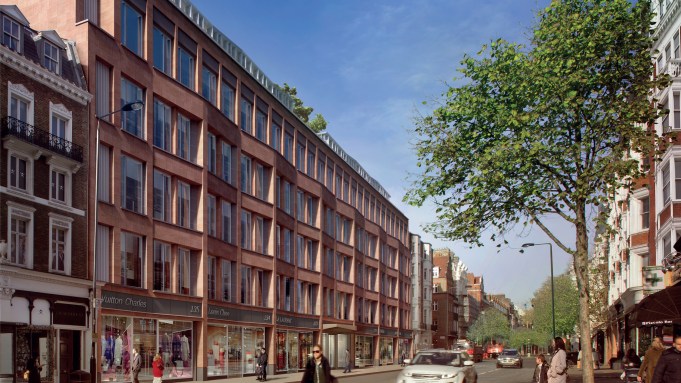 LONDON — The Cadogan Estate has big plans for Sloane Street.

The estate, which owns 93 acres of prime retail and residential property in London’s Chelsea, is headed by chief executive officer Hugh Seaborn, who is spearheading a drive to attract a new type of high-end designer brand to the famed shopping street, lead by the development of a site at the southern end of the street, 131 Sloane Street.

The development, all of which will be ready for occupancy in November, consists of six flagship premises that face Sloane Street; these will be ready for occupancy later this month. Seaborn said of those units that Cadogan is “genuinely looking for something exceptionally unusual. We favor independent brands, or those with less than eight shops nationally. If a brand is coming in from overseas, we look to get its second or third store so that they’re their flagships.”

The six flagship spaces have been designed specifically to be desirable to this level of brand, with high ceilings and large windows for lots of natural light. “It’s all about trying to put together a package that attracts the world’s brands to Sloane Street,” he said. “We are looking for the right cool, contemporary luxury brands for [the southern end] of the street to complement the Chloé and Emilia Wickstead flagships that are just opposite.”

Seaborn declined to comment on parties vying for the flagship spaces, but sources say brands such as Tamara Mellon, Marc Jacobs, Roland Mouret and Helmut Lang have expressed interest in 131, while Céline and Givenchy have inquired about sites on other parts of Sloane Street.

The flagships are set over three levels, one of which is basement storage space — a feature that was missing from the previous post-war building that was demolished to make space for 131. The ground level faces Sloane Street, while the lower ground floor looks onto a central piazza space surrounded by smaller kiosk-style boutiques, as well as a café, artisan food shops, and a 140-cover restaurant. It is all intended to be a neighborhood hub for the area’s residents. For the office spaces above, interest has come from several private equity firms seeking to move from Mayfair, where many are now based.

Architects Stiff and Trevillion were briefed to look to the local architecture and surrounding materials for the development. “We had to go all over the place to source the right colored stone for the bricks,” Seaborn said. “We eventually found a wonderfully rich red brick in a Scottish quarry.

“Food and beverage are an important focus for us at the moment,” he said, adding that the Belmond Group, which took control of the 64-room Cadogan Hotel in July 2014, would soon be revealing a blue-chip name for its flagship restaurant that will bow — alongside the hotel’s reopening — in summer 2016, following a two-year closure and a 48 million pound, or $74.5 million at current exchange, investment.

“We don’t want the [restaurant at 131 Sloane Street] to be top, top Michelin-level; it’s just not what we need here. It’s pretty important that we position that right,” Seaborn said. “I suppose Colbert [a French-style brasserie on nearby Sloane Square] is a good example of the kind of accessibility level we are looking for — a genuine all-day offer: you can have a coffee and croissant midmorning, or you can have a white tablecloth and a bottle of Champagne at lunch or dinner.”

Also planned to open in 2016, and adding to the area’s new nonfashion draws, is a London outpost of Hôtel Costes, the Paris hot spot. It will open at One Sloane Gardens, just off Sloane Square, with a 40-room hotel.

Seaborn underlines Cadogan’s curated approach to selecting retailers for the estate, whose portfolio is valued at 5.3 billion pounds, about $8.2 billion, particularly for the 131 development. “We spend a lot of time talking to businesses and to people about what their plans are; we select very carefully,” he said. “Unusually, our first criterion is not the rent. It’s getting the operations in there that are compatible, fit well and will contribute to the area. If [a retailer] is important to the overall vibrancy of community then rent doesn’t come first.”

As an example, he said, “a bodega deli could maybe not afford to come into the center of Chelsea, but I think we all feel it would be delightful [here].”

This is an enviable position for Cadogan that means potential retailers are measured on factors other than profitability. There are just three property owners for all of 3.1 kilometer-long Sloane Street, with Cadogan holding by far the majority. Bond Street, by contrast, has more than 100 separate property owners.

Rent for a two-level, 1,379-square-foot store at 151 Sloane Street, opposite the new development, with 80 square feet of storage space, is listed on the estate’s Web site at 250,000 pounds, or about $390,000, a year. In the last few years, Michael Kors opened a flagship on the street and Browns moved its boutique to the southern end, while J. Crew, Club Monaco, Rag & Bone and Kate Spade all have stores on or around Sloane Square. The 131 development will also open onto Pavilion Road, where facialist Sarah Chapman opened her flagship Skinesis clinic in May.

The development’s basement space has been earmarked for a potential fitness business in the vein of SoulCycle or Barrecore. “The neighborhood is obsessed with health and fitness [so] we are talking to a few potential operators,” he said. “Now people are actually walking around carrying a green juice in their Lululemon kit.”

The estate has actively included its 2,000 residents in discussions about the kind of shops they want to see opening at 131. “We can love a shop but if the locals don’t support it, it doesn’t work,” explained Seaborn, adding that residents have been able to voice their opinions via a dedicated Web site and hard-copy questionnaires delivered to homes. “We have to recognize what people want and be sympathetic with members of the community.”

Seaborn is aware that community support is key to the success of bricks-and-mortar retail in an age of digital shopping. “It all comes back to making Chelsea one of the best places to live, shop and work,” he said. “We’re seeing that the rise of online shopping doesn’t threaten the future of bricks-and-mortar flagship stores, but these stores are needing to work even harder now to offer an inspiring brand experience. With this challenge in mind, single ownership allows us to better support our retailers — we see it as part of our role to help ‘curate’ an environment in which they can thrive. This means creating a vibrant, enticing London neighborhood where customers want to spend time — a combination of the right physical space for the brand and correct ‘adjacencies’ including great restaurants, cafés and bars.”

But the street is not without challenges. The geographical divide created by private gardens in the middle of the street have long been a physical barrier that some shoppers won’t cross, often because they are ignorant that there are two separate retail stretches — the upper one closer to Knightsbridge and Harvey Nichols, and the lower one near Sloane Square. Seaborn said the dedicated Sloane Street ambassadors are often asked at the northern end of the street for directions to Cartier or Chloé, which are at the southern end, but “then they hit the gardens and they think that’s the end of Sloane Street.”

“Luxury retailers see the northern end and think that’s a safe place to be in some way because it has got that kind of established luxury international feel. [But at the southern end], with the Saatchi Gallery just across Sloane Square, Costes opening, the Royal Court Theatre and Cadogan Hall, it has a cultural attraction we don’t have at the North End and is an exciting destination in its own right,” he contended.

Cadogan is working with public realm consultants to better connect both ends of the street, and Seaborn said “everything the eye touches on Sloane Street is being studied” in order to “make sure it’s as beautiful as it can be, and consistent across the length of the street.”

The street is also long, wide and straight, making it attractive for supercar drag races but there are plans in place to “reduce the carriageway without impacting traffic, so it can flow as easily but not as fast by having wider pedestrian walking spaces, improving the experience for residents and pedestrians.

Seaborn referenced Avenue Montaigne in Paris as an example of the end goal. “We will draw the landscaping out from the lovely old gardens in the middle of the street and have more greenery and seating areas so you get a sense of a green street with lots of landscapes so you can enjoy the street rather than just transporting from top to bottom,” he said, adding that Cadogan is also looking at investing in public art.

But don’t expect an overnight overhaul. “It’s a long game. It’s about having a clear vision and making sure everybody understands it,” he said. “We take a long-term view of the retail mix in the area and how it works together to create the ideal experience for both locals and visitors. This means a balance of international luxury flagships with the best-in-their-field independent designers and artisans.”