Stella McCartney unveiled not one but two stores in China last month and kicked off an expansion drive to open another seven units in the country over the...

By Constance Haisma-Kwok on May 15, 2008
View Slideshow 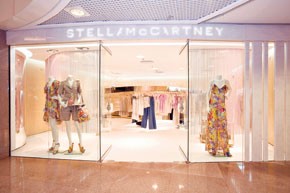 HONG KONG — Stella McCartney unveiled not one but two stores in China last month and kicked off an expansion drive to open another seven units in the country over the next five years.

The dual openings, in Hong Kong’s Harbour City complex and Beijing’s new China World mall, were practically simultaneous, occurring within a time span of just a week. The brand now has three stores in China, the first opening in Shanghai in September at the popular Plaza 66 shopping center.

“We never planned to open both stores in one week; it just happened that we got the right spaces at the same time,” Marco Bizzarri, Stella McCartney chief executive officer, said after the Beijing store’s opening event, which drew more than 300 guests.

In Hong Kong, the shop is slightly smaller at 1,030 square feet and carries the rtw collection, accessories, footwear and eyewear, but not the beauty line or lingerie. The shop takes over the ground floor location that was previously home to BCBG Max Azria in the Harbour City mall in Tsim Sha Tsui, or TST, the district most popular with Mainland tourists.

“In Hong Kong it is very, very difficult to find locations. Ideally, we’d open a flagship first in Hong Kong Island and then open in TST, but finding the right location and size takes time. The rent in Hong Kong is completely crazy — it goes up and up,” said Bizzarri, who is nonetheless pleased with the Harbour City site. The store’s neighbors include Yves Saint Laurent, Celine, Missoni and the multibrand shop On Pedder.

In Beijing, the boutique resides next to Jimmy Choo in the lower level of the China World mall. The shopping center is in the heart of Beijing’s financial district and is popular with the capital city’s well-heeled shoppers.

“We are planning to open 10 shops in the next five years,” said Bizzarri, who declined to give sales estimates for any of the stores. “We are working with Lane Crawford [Joyce Group] and it all depends on if both sides are happy — right now we are.”

Bizzarri added the brand considers itself fortunate to have developed a strategy for Asia in light of sluggish market conditions elsewhere, especially in the U.S. “We don’t really have a choice [about focusing on Asia], but we’ve been lucky in the deals we have and with a business model that is pushing Asia more than other countries. It’s paying off. Asia is balancing what’s happening in other parts of the world,” he said.

Bizzarri pointed out, however, that the company has not seen a decline in U.S. sales. “[As of] right now, we haven’t seen any impact; we’re still growing in the U.S. We’re young in the life cycle of a brand — we’re in the growing stage, so we’re doing very well, but Asia is still growing fastest, there’s no doubt,” he said.

“Our customers in China are very different — they are younger, more tech-savvy than those in the U.S. and Europe,” said Bizzarri.