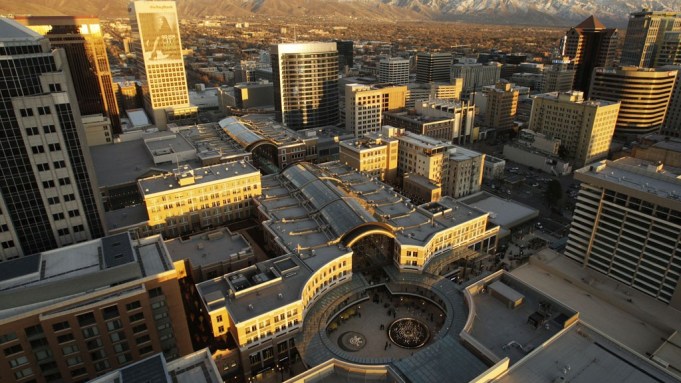 “It was a zoo,” said Bill Taubman, chief operating officer. “It was really unbelievable.”

Tiffany’s first store in Utah had to limit traffic to 100 visitors at a time, added Taubman spokeswoman Karen MacDonald.

“You don’t want to declare victory too early, but there is no question that sales have exceeded everyone’s expectations so far,” Taubman said. “We believe this should perform well against our portfolio average of $641 a foot last year. We only want to build assets that we feel are sustainable in the top half of our portfolio.”

With retractable glass roofs, a fountain that spouts fire and water, and a man-made, trout-stocked creek running through it, City Creek is the only regional mall opening this year, according to the International Council of Shopping Centers.

It’s also the only one almost entirely funded in cash by the Church of Jesus Christ of Latter Day Saints, apart from Taubman’s $76 million investment.

“The most important thing for us was the revitalization and renewal of the heart of downtown Salt Lake City, which is the site of the church’s worldwide headquarters,” said Dale Bills, spokesman for City Creek Reserve, the church’s development company. “The land is adjacent to sacred ecclesiastical spaces, and it was important that those blocks be vibrant and vital for the long term.”

Known locally as LDS, the church is a powerful force in Salt Lake County, where Mormons comprise 40 to 50 percent of the 1 million residents, according to various estimates. Utah’s population of 2.8 million is 69 percent Mormon, according to LDS.

The church hasn’t revealed the cost of the mixed-use project, but the retail center is valued at $1.5 billion, according to Deseret News, LDS’ daily newspaper. The site also features 111 new apartments that are fully leased and 425 condos priced from $150,000 to $2 million, with 30 percent sold. Most of City Creek’s 1.7 million square feet of office space existed prior to construction.

Taubman, who started as a consultant and became a partner in the project, agreed to LDS’ request that City Creek stores remain closed Sundays.

“We talked to Nordstrom and Macy’s, and both of them underpenetrated Sundays relative to stores in other markets, so Sunday is not as important a day in Salt Lake as it is in other markets,” he said. “We felt it was viable.”

Nordstrom built a 125,000-square-foot store with a colorful LED skin and Gucci and Yves Saint Laurent shops-in-shop within. Macy’s moved into a 175,000-square-foot restored historic landmark with an elaborate cast iron facade on Main Street.

Situated midway along the 80-mile Wasatch front that shelters 60 percent of the state’s residents, Salt Lake County “swims in tax revenue,” according to a Salt Lake Tribune report that tax receipts swelled 8.2 percent in December and 7.4 percent for 2011.

“There is a strong correlation between the number of households with incomes of $100,000 to $150,000 and the performance of a shopping center, and those metrics are quite strong,” Taubman noted.

High-paying employers include Goldman Sachs Group, which has its second-largest U.S. office here and is expanding, as well as Sinclair Oil and the University of Utah.

Taubman expects visitors will account for 30 percent of sales at City Creek. Conventioneers, for instance, spent $272 million on retail and attractions last year, according to the Salt Lake CVB, and the 2002 Olympics put Salt Lake on the map for winter sports.

Now it annually attracts 4.2 million people to the 14 ski resorts all within a short drive of the city, according to Ski Utah, a marketing company. Best known is Deer Valley in Park City, named tops in North America for the past three years by Ski magazine.

“It’s about connecting with our customer on another level and providing another emotional attachment that they have with the project,” Taubman said.