The New Dynamics of Retail

With the old retail model said to be broken, developers evolve with open-air, mixed-use, urban facilities. 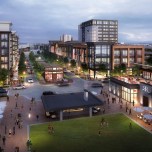 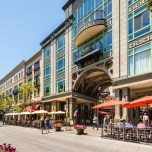 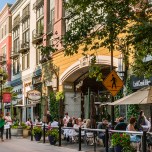 These days, it seems real estate investment trusts, or REITS, and mall operators can’t add hotels, office buildings and residential components to their centers fast enough. Density is the name of their game as they build a captive audience of potential customers.

“We believe we’ve cracked the code to make retail successful,” said David Weinert, North American Properties partner and senior vice president of leasing, who recently joined the 64-year-old NAP after roles as head of leasing at Taubman Cos.

“That business is over as we know it because there isn’t going to be another mall built in the U.S.,” Weinert said. “The only way a critical mass of retail gets built is mixed-use development.”

Of the densification malls are attempting, Weinert said, “The guest is seeking an open-air urban experience. I can’t imagine attaching an apartment tower to a mall or the critical mass of an office building and hotel. I haven’t seen it work yet. The challenge regional malls face is they’re controlled by department store anchors and [restrictive use or restrictive easement covenants]. Those restrictions will hamstring any ground-up development.”

Matt Simon, who for seven years operated The Grove, Caruso Affiliated’s wildly successful open air property in Los Angeles, also recently joined NAP, which several years ago began to transition the company to become more hospitality and community-focused. “We still lease retail space and build office space and hotels, but we realized that if we’re going to succeed in the retail world today, we’ve got to build communities,” Simon said.

Simon claims retailers, especially digital native brands, are responding to mixed-use projects. “They said the mall is dead. Not retail-dominant mixed-use developments. Avalon is the most recent ground-up community of buildings in the U.S.,” he said, referring to the 86-acre Alpharetta, Ga., project that features 570,000 square feet of retail space, 750,000 square feet of office space, luxury apartments and single-family homes. A 330-room hotel is on tap. Avalon holds more than 200 events per year.

“We studied The Grove, Santana Row and Easton and Reston, ” Simon said. “We wanted to improve on those.”

NAP’s Riverton metro-New York project is “a waterfront Avalon on steroids,” Weinert said. “We have an opportunity there to do what we did in suburban Atlanta and build a city within a city. That’s what our retailers are responding to.” NAP is expecting the 440-acre $2.5 billion Riverton, whose first phase will open in 2020, to become a destination. It has apparently received the blessing of state officials and will have its own private exit ramp — number 125 — from the Garden State Parkway.

Weinert used hyperbole common in the retail real estate industry, saying, “Riverton will introduce a new class of mixed-use that does not currently exist.” The plan does sound impressive with 2,000 residential units, 1.4 million square feet of retail space and the same amount of square footage devoted to entertainment venues, public space and recreational facilities. The retail component will be broken up into two or three categories. Value retail will occupy 700,000 square feet with the remainder located in a village setting, in hotel, office and residential buildings, and in a Main Street setting.

Weinert said Riverton sales will run toward “the high side of all retail in the county, in excess $1,000. We want to ensure we have the right tenant mix with unique, creative and cutting-edge retailers.” He added that Avalon has proven that “it can deliver that top performance without a department store anchor.”

“There are hundreds of retailers with new, unique points of view, including local retailers, native digital brands. There’s a wonderful pool of new and exciting retailers, they’re just more careful with their open-to buy and where they locate,” Weinert said. “We’re looking at a merchandizing plan where 95 percent of retailers don’t exist within a 10-mile radius.”

WS Development also aims to do something unique with its retail mix at Seaport, Boston’s largest mixed-use construction project. The firm is capitalizing on the fact that the city lacks a strong shopping district. There is Copley Place, the high-end urban mall where Neiman Marcus is located. Newbury Street in Boston’s tony Back Bay neighborhood has seen a revolving door of luxury tenants such as Giorgio Armani, even dating back to 1998 when Bonwit Teller operated a unit there.

About half of the retail space has opened, with the remainder due to come on line in 2020. Warby Parker, Blue Mercury, Bonobos, SoulCycle, Seaport Barbers and Equinox health club bowed, along with L.L. Bean whose 8,500-square-foot store offers products that reflect the town to trail lifestyle. Its proximity to the Boston Children’s Museum dictated the goods kids will want, such as sleeping bags, and kayaks and stand-up paddleboards are for sale, reflecting the city’s penchant for watching crew teams skim across the Charles River.

According to reports, Amazon has leased more than 200,000 square feet of space, but Norley declined to comment.

The area will also include parks and promenades with a green spine called Harbor Way running the length of the district and created by James Corner Field Operations, which designed Manhattan’s High Line.