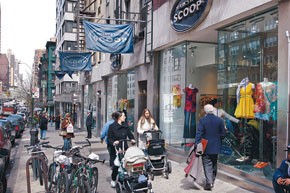 NEW YORK — For more than a decade, Third Avenue, between 64th and 79th Streets, has been a bastion of independent specialty retailers. Now, national chains are discovering it and rents are rising sharply.

More than 30 boutiques such as Big Drop, Diabless, Cantaloupe and Precision cater to the affluent neighborhood’s various constituencies, which include girls from the Nightingale-Bamford, Sacred Heart and Spence schools. During the week, they are in uniforms of tartan pleated skirts and polo shirts and on weekends they switch to Rachel Pally tops and designer jeans. There are mothers who wear Paige Premium denim and Ella Moss tops to drop kids off at school, and working women who favor Robert Rodriguez, Diane von Furstenberg and Theory for the office.

Stores along Third Avenue’s boutique row are in the Upper East Side zip code 10021, which corresponds to a neighborhood with one of the highest concentrations of wealth in the U.S. More than 100,000 residents have a per capita income in excess of $90,000.

According to the Real Estate Board of New York, asking rents on Third Avenue between 60th and 72nd Streets were $218 a square foot last year, down 10.2 percent from $243 a square foot in 2006. Even with the decline in asking rents, the vicinity is becoming too expensive for longtime independent retailers who signed leases for far less money.

Prices on Third Avenue, as they were in other Manhattan locales such as Columbus Avenue, SoHo and the Meatpacking District, are being driven by national retailers such as Ann Taylor, Banana Republic, Club Monaco, Coldwater Creek and Sephora, among others.

“There’s demand from 64th Street to 79th Street from national chains,” said Doron Yona, who along with his brother, Moshe, owns six Anik units in Manhattan; Englewood, N.J., and Tel Aviv. “Everybody wants to be there. Now the neighborhood is reaching the point where it’s becoming too expensive. If someone is not in the big leagues, it’s difficult to do a deal, so only the national chains will come. When the leases run out, only the big guys will be able to afford to move in.”

When Yona opened the first Anik location at 1355 Third Avenue, between 77th and 78th Streets, 20 years ago, there were few if any fashion tenants on Third Avenue. Yona, who remembers storefronts for stationers, butchers, bakeries and fishmongers, considers himself a pioneer.

“I thought the traffic from the [6 line] subway would be good,” he said. “In the beginning, it was tough. First I leased one store, then I leased another, and finally, I leased a third.”

Stefanie Greenfield, co-founder of Scoop, opened a unit on Third Avenue 10 years ago. It was the company’s second Scoop store after the SoHo unit. At the time, Greenfield said Scoop was one of the first fashion boutiques along Third Avenue in the Sixties and Seventies.

“I think Precision might have been on Third Avenue before us,” she said, referring to the women’s clothing and accessories firm with two stores on the avenue. “We were one of the first. Uzi [Ben-Abraham, Scoop’s co-founder] and I got in his car and drove up Third Avenue. We couldn’t afford to be on Madison Avenue.”

Greenfield and Ben-Abraham saw a for-rent sign in the window of a deli. “Uzi checked it out,” Greenfield said. “Everybody said to us, ‘Third Avenue?’ It was one of those times when everybody thinks you’re crazy. We were pioneers. We’ve opened three stores on Third Avenue.”

Greenfield said she likes the collegiality of the Third Avenue store. “People come in and say, ‘I live around the corner,'” she explained. “We wanted a store like the bar at ‘Cheers.’ It’s a neighborhood and it’s residential. We put in ramps for baby carriages.”

Greenfield has watched customers grow from girls in private schools to young women in entry-levels jobs to women in their early 30s getting married.

“We’re a store where they buy a head-to-toe look,” she said. “These women come often and demand great service. They love Tory Burch, Alice + Olivia, J Brand jeans, Jimmy Choo and Diane von Furstenberg. Right now, Third Avenue is our number-one volume store with sales of $1,500-plus a square foot.”

“Lululemon took a store on Third Avenue and 66th Street and Bebe opened at Third Avenue and 65th Street,” she said. “It’s interesting because there’s no huge traffic generator in the Seventies. I think its development was organic. Farther south, Bloomingdale’s Manhattan flagship and Hunter College are huge traffic generators. Why did this happen? There was large space available and at one point it was reasonable. Retailers started to cluster there and did strong business because they have a built-in customer who lives in the neighborhood.”

Yona lamented the power of landlords as many independent retailers have done in other New York neighborhoods that became popular with national chains.

“It’s not a neighborhood where you have a lot of traffic from tourists,” he said. “I have to depend on the neighborhood people. The landlords are asking too much money. They’re getting greedy and they’re killing the area. It’s losing the charm of a boutique-y neighborhood like one you would see in Paris. Soon, Manhattan will be like a mall.”