Inside the Thom Browne Store in London's Mayfair

LONDON — Testament to the vitality of luxury — and to the future of city centers currently rattled by a lack of international tourism — a retail property owner here is setting up a cross-border, luxury retail advisory business that aims to connect high-end brands and retailers with the owners of prime real estate on key shopping streets across Europe and in New York.

Trophaeum, which owns retail property in Mayfair in London as well as in Milan, Paris and Monaco is setting up a bespoke luxury retail advisory business called Trophaeum Advisers that will work across those cities, as well as New York. An announcement is expected today.

Trophaeum Advisers has brought on board the Paris-based Franck Desnoyers, an independent luxury retail real estate broker who will merge his business with the new company. Desnoyers has been one of the most active independent agents in France over the last 20 years, and has completed a number of high-profile deals on Rue Saint-Honoré.

His clients include Saint Laurent, Loewe, Moynat and Giorgio Armani.

Most recently, he acted for, and completed, the deal for the new Versace flagship next to the Hôtel Costes in Paris. Trophaeum also pointed out that Desnoyers has dealmaking expertise in Monaco, Saint Tropez, and Cannes.

Matt Farrell, managing director of Trophaeum Asset Management, said it was the right moment to form an advisory business such as this, and said it would set the stage for the “renaissance” of the retail real estate market, which is becoming increasingly “supra-national.”

“For the past eight years, we have been quietly advising many top luxury brands on their real estate strategies and requirements between London, Milan and Paris. Brands look to us as a trusted adviser that understands the requirements of both brands and landlords, given our own extensive portfolios in these key luxury cities. We felt now was the time to widen our offering of consultancy services,” Farrell said. 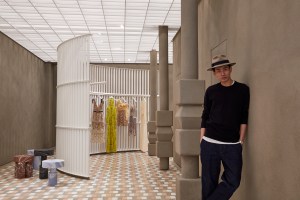 Han Chong at the Self-Portrait flagship on Albemarle Street in London.  Courtesy Photo

Desnoyers said he was eager to join the Trophaeum team, “as their strong position as luxury landlords, and close ties to the Italian fashion world, will complement the luxury advisory business that I have built in France over the last 25 years.”

Trophaeum has also recruited Ethan Berenzweig, a leasing agent who has worked at Ripco Real Estate and Cushman & Wakefield in New York. He is now based in London.

The company said Berenzweig brings with him “extensive knowledge of the U.S. retail real estate landscape,” having worked in Manhattan’s SoHo, and on Fifth and Madison Avenues.

Over the past 10 years, Trophaeum said it has expanded its luxury real estate portfolio by leveraging its growing network and its access to luxury brands across the retail and hospitality space; by tailoring “off-market, value-add deals;” and by curating top shopping and dining destinations in key cities.

In less than a decade, Trophaeum has transformed Albemarle Street from a charming, but little trafficked, strip of mostly art galleries into a buzzy fashion, luxury and dining hub.

It installed Self-Portrait, Alexander Wang, Casadei, Aquazzura and Thom Browne, among other brands, brought in the buzzy bar and restaurant Isabel, and Robin Birley’s private members club Oswald’s, with its extensive wine cellar.

Throughout the crisis, Farrell has been relentlessly bullish about Mayfair overall and has continued to curate Albemarle Street.

As reported, Ermenegildo Zegna Group will be shifting Agnona out of Number 37 Albemarle and swapping it for a Thom Browne women’s wear store (Thom Browne men’s wear is at Number 3). The women’s wear brand Galvan is also set to move onto the luxury strip.

Earlier this year, just after lockdown, Farrell said Bond Street and its environs should recover faster than any other luxury district in the world, due to London’s super wealthy, international residents who fuel the high domestic spend in the neighborhood.

“London doesn’t have to depend on Saudis, Indians, Russians, Americans and Italians flying in — because they already live here. London has large, wealthy international communities,” he said in an interview shortly after lockdown.

In February Trophaeum purchased a 15,000-square-foot retail block on New Bond Street from a firm controlled by the banker Joseph Safra. Trophaeum, which also owns other properties on New Bond Street and in other neighborhoods around London, paid 130 million pounds for the building, which currently houses Halcyon Gallery on the ground floor.