An influx of younger labels, such as Rag & Bone, Proenza Schouler, Maje and Sandro, are giving the shopping street a cooler, edgier vibe. 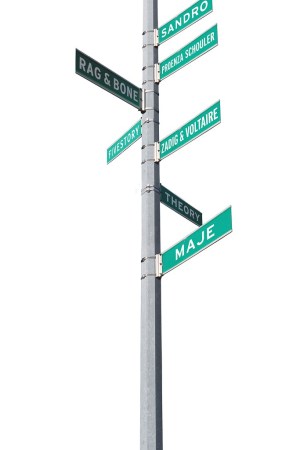 NEW YORK — Rag & Bone at 909. Zadig & Voltaire at 992. Proenza Schouler is taking 822. Maje and Sandro are coming soon. The retail landscape on Madison Avenue is shifting — specifically toward the cooler, edgier confines of SoHo, where one expects to and can find most of the brands just mentioned. Labels often described as “downtown” have been migrating north, with many taking up residence above 72nd Street.

“Madison Avenue has certainly come back in the past 18 months or so,” said Joel Isaacs of real estate firm Isaacs and Company. “In September of 2010 it started roaring back and in 2011 there must have been over a dozen deals signed on the street. The rents are back up to where they were in 2007.”

As retail thoroughfares go, Madison Avenue is proven ground that has traditionally catered to a tony, neighborhood clientele. They shop at Carolina Herrera and Oscar de la Renta. Some recent additions to the strip are no-brainers. Tory Burch, for example, has an uptown-ness about her collection and opened her Madison flagship in September. Monique Lhuillier, the designer known for wedding gowns and red-carpet dresses, is set to open on 71st Street between Fifth and Madison this summer. Lanvin and Valentino have new storefronts under construction.

The Establishment is now being joined by an interesting influx of younger labels, contemporary and otherwise, the arrival of which seems to indicate some kind of change in the retail climate.

Vince and Rebecca Taylor have both taken space at 980 Madison. Last year, Joie, the California-based contemporary label, opened its first New York store at 1196 Madison near 87th Street. In an interview with WWD last month, the jewelry designer Eddie Borgo, whose signatures include studded bangles and pendants and whose most recent collection was based on subterranean sewer systems, said Madison Avenue is a top contender for him when scouting a store space.

Perhaps the biggest sign of Madison’s new cool factor is Proenza Schouler. For years, designers Lazaro Hernandez and Jack McCollough have teased their impending retail debut; the only question was when and where. Considering their status as downtown darlings and favorites of Chelsea art girls, the smart money would have put them in SoHo. So there was an element of surprise when news circulated in December that Proenza Schouler had signed a lease for a space on Madison between 68th and 69th Streets. Hernandez and McCollough declined to comment for this story, but Andrew Rosen — who has a significant stake in Proenza Schouler and Rag & Bone, as well as Alice + Olivia, Theory and Helmut Lang, which are situated like three ducks in a row at 755 Madison — said moving his brands uptown is simply a matter of “good business.”

RELATED STORY: The Changing Face of the Meatpacking District >>

Much of that has to do with real estate. “We found rents that worked with the kind of business we can do,” said Rosen. “Madison was a shift. The big luxury European designers are still there but a lot of the Americans have had an opportunity to move up there because there was vacancy.”

Space in the city is tight in general right now, and location has to make sense. Fifth Avenue is for megabrands, 34th Street is for fast fashion and Meatpacking is expensive, which leaves SoHo and Madison as the two most desirable locations. “The New York City economy is coming back,” said Lisa Rosenthal of the Lansco Corp. “Not only do we have a strong tourist base but we have a very strong affluent residential population. The brands [moving to Madison] have been successful at other fashion locations. Madison is the next logical location — particularly if you’re going Madison above 66th, which tends to be a little more contemporary. The physical size of the spaces are reasonable sizes for a number of these brands.” And the rents are around $500 a square foot, which compares with Meatpacking District rents of around $300 to $600 a square foot, with SoHo at half that.

All of those factors were considered by Frederic Biousse, chief executive officer of SMCP Group in France and ceo of SMCP USA, which owns French contemporary labels Maje and Sandro — with Bernard Arnault’s L Capital a significant shareholder. “New York is a very important, trend-setting place in the world, so the better you are represented in New York, the stronger you appear as a global brand.”

His strategy for Maje and Sandro is to open many stores in the residential neighborhoods rather than one large flagship. Since October, Maje has opened on Spring Street and Bleecker, while Sandro has a store on Bleecker and a forthcoming spot in SoHo. SoHo is ideal for its image and its combination of tourist and local foot traffic, and the same goes for what Biousse calls “upper Madison,” the blocks between 69th and 85th streets.

“On Madison you have clientele that is more bourgeois and high-scale — they live there and shop there,” said Biousse. “And the most important brands are up there. It’s a big statement to open on Madison.”

Nothing is set in stone yet, but Biousse is looking very closely at spaces on Madison between 71st and 75th Streets. If all goes according to plan, one store will hopefully open around August or September, with a second to follow soon after.

Another brand following the residential neighborhood model is Rag & Bone. Earlier this month, the label opened a store at 909 Madison, on the corner of 73rd Street. The 9,000-square-foot Federal-style town house is a former Chase Bank, and an impressive chunk of real estate. It’s the label’s sixth location in New York City; the rest are mostly downtown, with two on Christopher Street, one on Mercer, one on Houston, and a small space on the Upper West Side.

David Neville, the label’s managing partner and designer with Marcus Wainwright, considers Madison the retail promised land, something a brand has to work for. A few days before the Madison store’s opening, Neville was practically giddy at the sight of Ralph Lauren’s Rhinelander Mansion down the street.

“If you’re extremely capitalized in the beginning and you can open a store on Madison Avenue, then good for you,” said Neville. “For us it’s been a 10-year process of building our company.” Rebecca Taylor was only able to secure space on Madison after the infusion of cash that came with Kellwood Co. ownership.

An example of major capital at the outset would be FiveStory. The new concept store at 18 East 69th Street between Fifth and Madison is owned by Fred Distenfeld and his 26-year-old daughter Claire, who in a press blitz leading up to the store opening last Wednesday consistently put her store in the same sentence as Colette and 10 Corso Como. Having grown up on Madison Avenue, she had her heart set on an Upper East Side town house.

“First and foremost, I wanted to create something that had a really beautiful marriage between laid-back comfortable and downtown cool, but also embedded with this elegant, beautiful Upper East Side grandeur that has been around forever,” said Claire, who stocks hard-to-find labels such as Visvim for men, Lyn Devon for women and Nina Ricci shoes. “I went to the real estate broker and I said, ‘I have a 10-block radius from 60th to 70th and Fifth, Madison, Park. Let’s do it.’”

It took three months to find the perfect spot, the former home of D. Porthault linens, to which Distenfeld senior and junior had to convince the owner to hand over the keys. “I don’t think he really cared that we were changing the retail world in New York,” said Claire.

The way Rosen sees it, the Madison Avenue landscape is changing to reflect the customer’s taste. “The customer has been turned onto these brands, whether they were going downtown to get them or to Barneys or Bergdorf’s to get them. Why should they have to go downtown to get it?” said Rosen.

“I was standing on the corner the other day just staring,” said Neville. “Outside of the building, there were a whole bunch of mums from Buckley [School] walking down the street with their kids and I could see them being our customer.”

The kids, too, in a few years.