The refurbished building nods to sustainability, the Art Deco past and the digital future.

A view of the Timberland floor at VF Corp.'s new hub in London's Soho

LONDON — VF Corp., parent of brands including Vans, The North Face and Timberland, has a new London home that’s bursting with greenery and a top-flight digital offer for 21st-century designers, merchandisers and buyers.

The 120-year-old building, located on the corner of Warwick and Beak Streets in Soho, spans 16,000 square feet across six floors, and has been designed with sustainable processes and materials by Darling Associates.

It’s meant to serve as a supercharged business-to-business space, an experiential showroom in one of VF’s most important international cities. Vans, The North Face and Timberland inhabit their own separate floors, while Kipling, Napapijri, Dickies, Eastpak, Icebreaker, Smartwool and Altra share their spaces with other brands or VF offices. 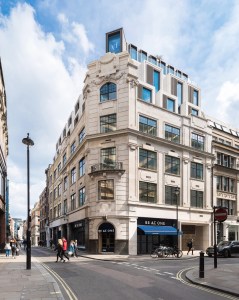 On the sixth floor, there is a design studio and breakout area, while the rooftop has been landscaped in a sea of green and lavender by Andy Sturgeon, who won multiple gold medals at the Chelsea Flower Show.

On Wednesday, VF principals said their aim is to prove their commitment to London, despite the Brexit uncertainty, to create a top-flight experiential environment for customers, and make it easier for them to place orders.

“We want to become a consumer-centric company, with the product as the story,” said Martino Scabbia Guerrini, VF EMEA group president, during a presentation at Axtell on Wednesday. He added that the new base in London would give VF a “global read” on product, trends and business.

He described VF as a “purpose-led company” that wanted to help the consumer question his or her use of plastic and polyester and to make sustainable choices.

He spoke alongside Christopher Raeburn, the London designer — and upcycling expert — who last year was named global creative director of Timberland. The two talked about VF’s efforts in the field of recycled leather and plastic.

The digital features in the showrooms are eye-popping, like something out of “Blade Runner 2049.” Based on gaming platforms, tall vertical screens feature life-sized avatar fit models, standing, spinning and moving around as they show off their looks in three dimensions.

Every stitch, fabric thickness, color, logo placement, fold and drape from the avatars’ footwear and clothing has been recorded, allowing designers, salespeople and factories to work off the same platform and communicate quickly and efficiently.

Users can touch the screen displays to change the lighting and visualize the products in various scenarios. 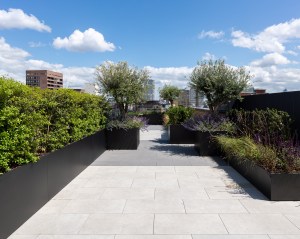 These digital designs are meant to replace sketches, and can be sent straight to factories for production.

“We’re saving time and materials and creating assets that can be used in a number of ways,” said a member of the Timberland team during a walk-through of the building. “We no longer have to send the factory patterns, and then wait six weeks to see them. Our goal now, with the new technology, is to sell products before we make them.”

The avatar technology is already up and running at Timberland, The North Face and Vans and will be rolled out to the other brands as well.

Digital screens with cinema-grade surround sound line the walls of the showrooms, while the Timberland space has walls and tables bursting with greenery.

VF said it has invested in a multi-year lease of Axtell Soho as a “demonstration of its commitment to continued growth in London and the U.K.” It added the new hub would be a key support to its European operations, strengthen trade relationships and fuel growth in the U.K.

London remains VF’s focus as “a megacity for expansion in the U.K.,” which has been the case since the company opened its first retail store on Carnaby Street in 2003.

The U.K. is now the number-one market for VF across the European Union, accounting for about 20 percent of all revenue in the region, or about 500 million pounds annually. By 2021, VF is expecting that figure to grow to 23 percent.

The company has 57 owned and operated stores in the U.K., and London alone represents 20 percent of U.K. revenue, with Vans leading the business.

The company’s EMEA operations are based out of Lugano, Switzerland.

VF has also officially spun off its jeans and outlet business, which includes Wrangler and Lee, into a separate company called Kontoor, and shifted its focus to powerhouses brands The North Face and Vans, both of which have been notching double-digit growth in the past few years.