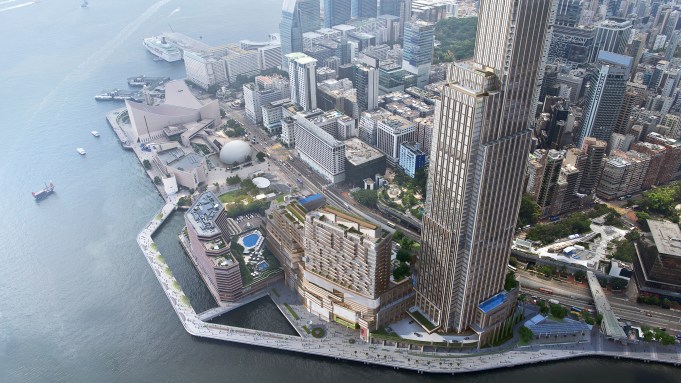 HONG KONG — The focal point of Hong Kong and its iconic skyline has always been the view of Hong Kong Island, but a game-changing project by New World Development on the Tsim Sha Tsui waterfront will give more reasons for people to turn and look out across the other side of Victoria Harbor.

Plans for Victoria Dockside, a $2.6 billion, 3 million-square-foot complex on the promenade of the Kowloon waterfront were unveiled Thursday. Set to fully open in 2019, the mixed-use development will offer office space, a 600-room Rosewood Hotel and Rosewood Residences overlooking Victoria Harbor, and is positioned as Hong Kong’s own version of Hudson Yards.

Its aim is to inject energy into a side of the harbor that has been a design eyesore for years. Next to Victoria Dockside is the Hong Kong Cultural Centre, which, despite its prime location on one of the world’s most famous waterfronts, was designed windowless, and on the other side, the city’s Avenue of Stars — a poorly done take on Hollywood’s Walk of Fame, which is undergoing a revamp after failing to impress.

RELATED: State of the Mall: A Worldwide Surge Driven by China, Mexico >>

Kohn Pedersen Fox architects, who worked with James Corner Field Operations, the same landscape designers who did the High Line, said the porosity of the Victoria Dockside complex was a main priority for the project. “The idea was to pull as many people across the street as close as possible to the water, not just tourists,” Forth Bagley, the KPF principal on the project, said.

The wide avenue Salisbury Road cuts the area off from the rest of Tsim Sha Tsui and the area is mainly accessible by an underground walkway.

Bagley explained that like Tokyo’s Roppongi Hills, it’s “a repositioning of an entire neighborhood. With Victoria Dockside, the goal is to make a more vertical, higher density version with programs and buildings stacked on each other.”

“We are committed to pushing new frontiers with Victoria Dockside,” said its mastermind, Adrian Cheng. Cheng is the founder of K11, in addition to executive vice chairman and general manager of New World Development. “Victoria Dockside will offer a kaleidoscope of experiences against the backdrop of one of the most impressive views in the world. This new district will provide a space for locals and international visitors alike to unwind from the chaos of everyday life.”

Bagley said they were deeply focused on putting together an “active place” so that people would have reason to visit more than once.

“When you think of IFC in Central, you’ve got [an office] building of 20,000 people coming in and out of it every day,” Bagley said.  “At the tip of TST [Tsim Sha Tsui], you don’t have that. What is going to be the draw that holds people beyond the fact there’s this amazing view?”

The site used to house a former New World Development shopping mall, but was originally the site of Holt’s Wharf — a warehouse terminal next to the old railway line. Dating back to 1910, it was a freight and logistics hub, and played a major role in the city becoming one of the busiest ports in the world.

While it will be a few years before the full vision comes to life, the office space will be functional starting at the end of this year. KPF is also working with New World on another mega project, the Guangzhou CTF Finance Centre, to be completed this year. The 530-meter (1,739 feet) building will be Guangzhou’s tallest skyscraper and will house a hotel, serviced apartments and offices as well as a large retail podium.