The $15 billion development project on the far west side of Manhattan could be the site of future New York Fashion Weeks if Mayor Michael Bloomberg has his way.

By David Moin and Alexandra Steigrad and Marc Karimzadeh on November 2, 2011
View Slideshow 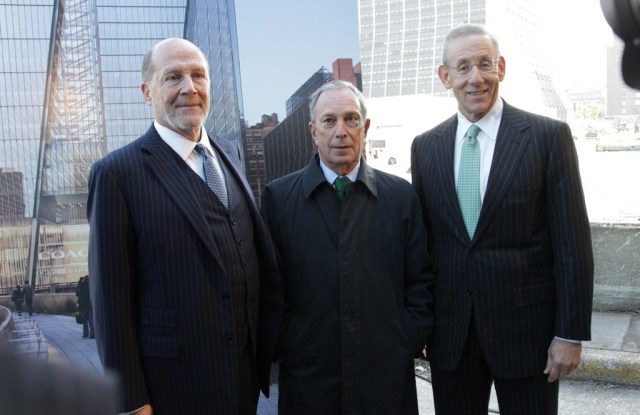 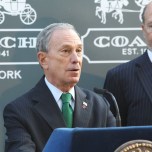 NEW YORK — Hudson Yards is out to become a nexus of fashion and retail.

The ambitious $15 billion development project on the far west side of Manhattan is angling not only for major retailers — including a high-end department store like Nordstrom — but also could be the site of future New York Fashion Weeks if Mayor Michael Bloomberg has his way. Further bolstering its fashion cred is the fact that Coach Inc. on Tuesday confirmed plans to open its global headquarters on the 26-acre site.

Overall, Hudson Yards will include office buildings, residential and retail space, a 150-room hotel, 14 acres of public space and a sprawling, modern center called the Culture Shed, which, according to Bloomberg, “will eventually” host Fashion Week.

“Fashion week has grown so much. It’s outgrown Lincoln Center already. It certainly outgrew Bryant Park a long time ago,” the mayor said at a Hudson Yards press conference Tuesday. “The fashion industry is part of our diversification plan.…It’s an enormous industry that creates a lot of jobs.…We need to make sure that we have the venues for these kinds of events and the Cultural Shed is one of those buildings that would be built to be able to handle that along with others [events].”

That idea of moving fashion week to Hudson Yards is in the early stages, but it’s been on the Council of Fashion Designers of America’s radar for some time.

Around 2006, Steven Kolb, CFDA chief executive officer, and Diane von Furstenberg, the organization’s president, met with Bloomberg to discuss the Hudson Yards project and how the fashion industry could be involved.

At the time, fashion shows were still being held at Bryant Park and Lincoln Center had not yet been secured as a site for fashion week.

“When we left Bryant Park and went to Lincoln Center, it was the perfect next home for us, but as fashion’s importance grows bigger and more important to the city and the economy of the city, we want to be able to grow with it,” Kolb said, adding that the CFDA recently met with the mayor and other city officials because the cultural center is still “of interest.”

“If there is something at the Culture Shed, we want to try to be part of that. It doesn’t mean fashion [and fashion week] will go there, but at this point in their planning, they are including fashion in their conversation,” he said.

Coach, Hudson Yards’ first major commercial tenant, was aware of fashion week’s potential move, but was drawn to the location mainly to centralize its headquarters — and 1,600 area employees — under the same roof.

“We’ve been part of New York City since our beginnings and for more than 50 years we’ve been headquartered on 34th Street,” Coach chairman and ceo Lew Frankfort told WWD. “We wanted to stay in the mid-West Side and this [move] gave us the opportunity.”

Coach will move its corporate offices to Hudson Yards’ first 51-story tower in late 2015 or early 2016. The brand will occupy over 600,000 square feet, or more than a third of the commercial space in the tower.

While Equinox Fitness also is confirmed to join Hudson Yards, the property’s developers, Related Cos. and Oxford Properties Group, have kept plans of who’s moving in next under wraps.

Nordstrom could be part of the project’s vision to become a center for fashion and retail. Talks with the Seattle-based upscale chain have been ongoing for months. It would be Nordstrom’s first full-line store in the city, after opening one of its Rack off-price units and a charity store called Treasure & Bond, both in Manhattan. Bloomingdale’s had been approached by Related earlier, but nixed the idea.

After Tuesday’s press conference, Related chairman and ceo Stephen Ross acknowledged that Hudson Yards is seeking a department store anchor but declined to indicate which ones are in the running. However, he told WWD that he expected to have a department store signed by the end of this year.

Nordstrom seems like a strong possibility, given the enormity of the project and its ability to provide the retailer with its space and transportation requirements. Furthermore, with Related’s multilevel Shops at Columbus Circle in the Time Warner Center seen as a success, retailers are likely to bet on the Hudson Yards project, which will also be multilevel, though there are risks considering the site is untested territory.

But Nordstrom is also considering other sites in Manhattan, and has checked out 1775 Broadway, an office tower just south of the Time Warner Center, and the former Drake Hotel space, on Park Avenue between 56th and 57th streets. Both locations could also provide Nordstrom’s space requirements of at least 180,000 to 200,000 square feet, a parcel extremely difficult to find in Manhattan, particularly in an area dense with upscale shoppers.

Hudson Yards is shooting for construction on its retail complex to be finished in 2015. Having an anchor signed soon would speed the process of attracting other retailers. In terms of density, income, buying power and visitors, Related says the West Side ranks as one of the top seven markets in America, and that Hudson Yards is expected to draw traffic from Times Square, Chelsea, the Meatpacking District and the Upper West Side, including leisure and business travelers, particularly those visiting the Jacob K. Javits Convention Center for conventions and trade shows. They think the High Line being extended this season from 20th to 30th Street, to the southern edge of Hudson Yards; the planned extension of the No. 7 subway to 34th Street and 11th Avenue at the foot of Hudson Yards, and upgrades happening soon at the Javits Center will feed traffic to the project.

Kohl’s and Target, too, have been scouting the West Side and Columbus Circle areas. But those retailers are seen as too down market for Hudson Yards, which is expected to look for a higher-grade anchor to lure upscale specialty retailers such as J. Crew and perhaps major luxury brands like those in the Time Warner Center.

Earlier this year, Ken Himmel, president of Related Urban, said that in terms of retail and restaurants being sought, “We want [Hudson Yards] to be approachable, with an incredibly broad appeal. We don’t want it to be intimidating.”

Related executives said the mall will have 720,000 to 750,000 square feet over five or six levels, each with roughly 120,000 square feet of selling space, making it big enough to accommodate a department store anchor of 200,000 square feet or more. The structure will be glass-enclosed, with views of the Hudson River and the Manhattan skyline to the north, south and east, and will have extended hours, to 10 to 11 p.m., depending on the business.