The extended sizes fashion site held on to sales in 2020, despite deep layoffs and cost-cutting, and sees things looking up this year.

A Carolina Herrera look for 11 Honore.

Despite his business looking much different than it did a year ago, Patrick Herning, founder and chief executive officer of 11 Honoré, is feeling positive about 2021.

“You think about the colossal nightmare that was 2020, but the reality is our business is way more healthy than any year so far,” Herning said.

But those numbers didn’t come without some serious cuts. Last year, Herning laid off nearly 60 percent of his staff and undertook other cost-cutting measures, like ending all marketing, resulting in the company spending about $3 million less than in 2019. As the coronavirus pandemic took hold and dented almost every corner of the economy with it, multiple points of shopping data and research showing fashion apparel in particular was suffering as millions of people spent the year working from home and being unable to socialize.

“You think you hit a threshold and you realize you haven’t,” Herning said. “I’d say to the team, ‘I hit the floor. Nope, I found a door to the basement. Nope, there’s a trapdoor. Gotta cut further!’ You think, ‘This isn’t possible. I can’t run this company leaner,’ and then you figure out a way to do it. That’s what 11 Honoré taught me this year.”

The company’s investors — venture capital firm Greycroft and smaller investment shop GC1 Ventures — also stuck by it, Herning said, aiding him with strategy. Nordstrom is another current investor, and last fall, 11 Honoré pulled together a Series A round of $10 million. While the company is not yet profitable, it is poised to be so in the first quarter of next year. A manufacturer is also lined up to become a new investor in the next month or so, which will aid the company in expanding its in-house line.

Herning said athleisure and celebrity lines are coming, with a red carpet collection even a possibility, and that an even broader assortment of price points is key to becoming profitable.

The pandemic and changing consumer demands, broadly shifting toward comfort and value, accelerated 11 Honoré’s own shift into more of a focus on its eponymous in-house label, soon to be multiple labels, and contemporary price points, roughly between $150 and $500. “Now we have to be all things to everybody,” Herning said.

Last year, luxury made up about 75 percent of the company’s revenue, with contemporary bringing in the other 25 percent. Now those percentages have swapped and in just six months of being available, the company’s in-house label accounted for 15 percent of sales. Combined with the cuts, the merchandise shift toward contemporary helped the company actually eke out revenue that increased by 5 percent in 2020. Herning would not share the exact revenue figures. 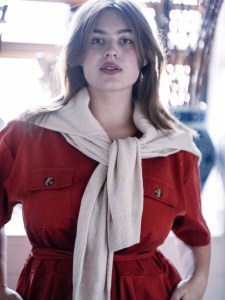 “There’s a lot to be said for category exclusivity,” he noted. “There’s only one 11 Honoré, so we were shielded from some of what COVID-19 did.”

By diversifying the assortment last year, 11 Honoré saw conversion rates increase by 30 percent. There were other positive metrics to be had, too, because despite the pandemic — which 10 months in is still breaking daily records of infections and deaths in the U.S. and has left 9.8 million people unemployed — others are still shopping for clothes, to some extent. And 11 Honoré is unique in that it is an e-commerce site dedicated to women above a standard size 12. A majority of U.S. women are actually a size 14 or above.

Herning said orders grew by 11 percent, units sold increased 12 percent and return rates dropped by 35 percent. Part of the increase in orders and units sold is due to discounts throughout the year, Herning admitted, but also due to the addition of lower price points at full price and, he said, the proprietary fit technology used for the in-house line.

That technology is something he said can be used to assist any brand that wants to join 11 Honoré. While Herning said he has some new partnerships coming up this year, including an expansion with Ganni, he’d like to see certain others come to the site this year. He singled out Tory Burch (who he said he’s reached out to, to no avail); Versace, and Fendi, which used Paloma Elsesser in its February runway presentation. But to his delight, there have been many brands that previously rebuffed the idea of being on 11 Honoré to reach out directly amid the pandemic, now in need of new customers wherever they can get them.

“Now is the time,” Herning said.

Editor’s Note: This article briefly was updated after its initial publication to change the company’s projected date of profitability to next year from this year.