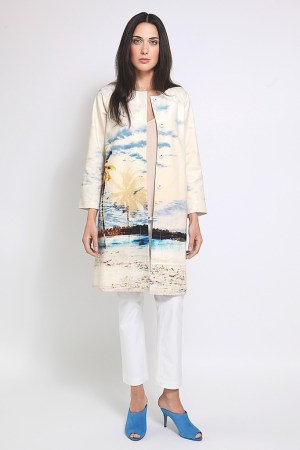 Named for Lord & Taylor’s Manhattan flagship address, the sportswear line is designed to rival brands such as Lauren Ralph Lauren, Calvin Klein, Michael Michael Kors and Vince Camuto on the better-price sportswear floor. The lifestyle collection will be carried in 49 Lord & Taylor stores in the U.S. and 92 Hudson’s Bay stores in Canada, as well as online. The line will be unveiled tonight at an event at The Glasshouses here.

“The purpose is to solidify a modern look for Lord & Taylor private label,” said Marie Holman-Rao, who joined the retailer a year ago as chief creative officer to oversee the design, development and marketing of the women’s private brands. She reports to Mary Turner, executive vice president, specialty, for HBC, parent of Hudson’s Bay in Canada and Lord & Taylor in the U.S.

As Turner explained, the launch of 424 Fifth signifies HBC’s investment and commitment to private brands as a way to differentiate themselves on the selling floor. The brand will have its own shop concept, and will run the gamut from career sportswear to casual wear to eveningwear. She said as the stores reconfigure their sportswear floors they will ensure that private brands get prominent space. She estimates that some stores could have a 1,500-square-foot shop for 424 Fifth, where key national brands can have a space as large as 2,500 square feet.

At HBC, private brands represent 9 percent of the volume, and officials said the goal is to boost the percentage to 15 percent in three to five years. Compared to other retailers such as Macy’s Inc., the private-brand business at HBC is underdeveloped.

Holman-Rao described the target customer for 424 Fifth as a women 35 years old and up. “There’s a void in the market for a woman to find fashionable things at a good value and fit,” she said. The spring collection, which is slated to hit stores in early January, includes tops, cardigans, blouses, T-shirts, skirts, pants, sweaters, jackets/outerwear and accessories. Dresses will be added later on. “We will mix day and evening in the same shop. We want to be a destination and a place where she can buy everything she needs,” said Holman-Rao.

HBC had a total of 30 private labels, but they’ve all been eliminated, with the exception of Black Brown 1826 men’s wear (designed by Joseph Abboud); Gluckstein home; HBC signature products; Distinctly Home, and Lord & Taylor. Labels such as Kate Hill, which was a traditional sportswear brand, no longer exist. The retailer plans to continue with its major Lord & Taylor cashmere program, which is driven by items and is separate from 424 Fifth, which is the fashion story, said Holman-Rao. The departments will be adjacent to each other.

“We stand for fashion,” said Holman-Rao, pointing to a cropped jacket. “She can wear the jacket with jeans and look very chic. The rounded shoulder makes it look very new and fresh looking.” She also believes in skirts for spring, both full and slim. Sweaters are textural, she added.

Holman-Rao has had years of experience designing for this woman. She was chief design officer at New York & Co. from 2007 to 2010, and president at Limited Design Services from 1997 to 2006. She was also an executive vice president, and later president of Banana Republic, from 1993 to 1999, and in recent years has been a consultant to retail and private equity firms. In the early part of her career, she worked at Ann Taylor, Perry Ellis and Macy’s.

The plan calls for 424 Fifth jewelry, scarves and clutch bags to be merchandised with the sportswear collection on the selling floor. The collection is manufactured overseas. 424 Fifth will range in sizes from 0 to 16 for spring and will offer petite and large sizes. The label will have a major social-media outreach and advertising component and will be highlighted in store windows. Turner said it’s conceivable that 424 Fifth could be sold to retailers overseas, in much the same way as Black Brown is going into Karstadt this Christmas. She declined to say whether Saks Fifth Avenue would ever carry the collection since the deal to purchase SFA hasn’t closed yet. Saks doesn’t carry better-price sportswear.

Turner wouldn’t reveal how large a business 424 Fifth could become, but she said she expects it to become one of the retailer’s top five best-selling sportswear vendors. “We believe passionately in our national brands. But for differentiation and exclusivity, we need strong private brands,” she said.