Via Santa Marta has been reinvented as a bustling art and design district. 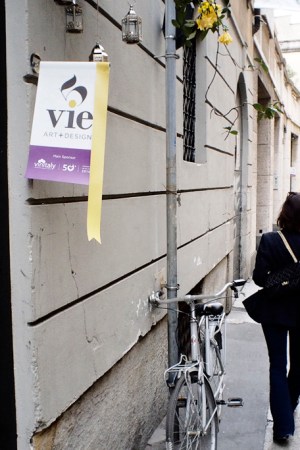 MILAN — Uberta Zambeletti, owner of Milanese concept store Wait and See, admits friends thought she was crazy when she opened on Milan’s via Santa Marta, in a neighborhood full of affluent signoras, bankers and antique stores.

“Everyone thought I was insane. This place was dead,” Zambeletti said from a velvety couch in her boutique, where silk vintage kimonos are presented as evening wear and pajama pants for anytime wear.

Just south of the Duomo and north of the Naviglio canals, the relatively hidden area that also includes Via San Maurilio and Via Lanzone is now commonly known as the 5Vie art and design district.

“We are not in the boonies. We are not on a high street. We are, however, in Milan’s historic city center. I moved here because I wanted it to be a destination point,” said Zambeletti, who is also a knitwear designer and design consultant for vanguard brands like MaxMara.

And in the five years since Zambeletti moved in, 5Vie has attracted other boutiques and international stores like New York-based furniture maker BDDW and bistro The Boidem, which showcases fashions and accessories from Israel. On June 22, 5Vie will introduce a number of initiatives targeting men to mark Men’s Fashion Week in Milan.

Zambeletti, along with 5Vie’s organizers, has been a huge proponent of the neighborhood’s push to cross-promote its fashionable and historic side through off-design week and off-official fashion week calendar events. Presentations have ushered in world-renowned names such as designer Arthur Arbesser and sculptor-designer Max Lamb and up-and-comers including Alessandro Enriquez of 10x10anitaliantheory and shoe designer Lodovico Zordanazzo.

The 5Vie committee was formed by a few parents who met at a local school. About a year and a half ago, they decided that the world needed to know about the area’s history that ranges from the wine vineyard of Leonardo Da Vinci and the 15th century cloisters of Sant’ Ambrogio envisaged by Bramante, to the architecture of one of the city’s most celebrated 20th century minds, Piero Portaluppi.

Compared to other upscale Milanese districts like Brera, 5Vie is also a hub for musicians and artisans and even bronze sculptors and goldsmiths.

Two 5Vie board committee members include Emanuele Tessarolo and his wife, Ernesta Del Cogliano, who has worked as a designer with companies such as Genny, Gianfranco Ferré and Krizia.

“We are seeing that 5Vie has had quite a bit of international attention and we hope that this will eventually enhance the economy of the neighborhood,” Tessarolo said.

“In the span of a few months it has been recognized as a place where things happen,” Tessarolo added, noting that 5Vie’s similarity with Le Marais lies in the fact that it is a central residential zone and both areas are filled with historic landmarks and a maze of narrow streets.

Unlike neighborhoods such as New York’s Meatpacking district and Harlem, where fashionable openings have renewed and revived poor or run-down enclaves, the 5Vie phenomenon is infusing a more casual vibe into an upscale neighborhood historically inhabited by some of the nation’s most prominent noble families such as the Borromeo and the Visconti di Modrone clans.

Strangely, design store BDDW’s owner and designer Tyler Hays said 5Vie’s Via Santa Marta reminded him of SoHo’s Crosby Street, the location of his first and only other store.

“When we opened the BDDW showroom at 5 Crosby Street in New York, the area had an off-the- beaten-path quality. I looked at various areas in Milan, and the space on Via Santa Marta I picked conveyed a similar feel as did Crosby, when we opened it 12 years ago,” Hays said.

The local fashion crowd agrees that 5Vie is the cultural hub of the city.

Made-to-measure blazer label Blaze co-founder Delfina Pinardi said it was a “dream” to be chosen by 5Vie to present during fashion week at the boutique Artisanal su Misura, which specializes in custom shoes and accessories for men and women.

“Uberta Zambeletti has [identified] the potential of a neighborhood that was becoming outdated and turned it into a vibrant, visited neighborhood with an interesting concept,” Pinardi added.

“It is the oldest neighborhood of the city and it is capitalizing on its history and its values by becoming an artistic, cultural district — one of the most vibrant of all. It is a meeting place of artisans, design, fashion and food, all tastefully presented with attention to quality but with just the right amount of nonchalance,” said Nonini, who has worked with some of the world’s top fashion and auto companies.

Zambeletti’s Wait and See continues to be the life of the 5Vie party.

During fashion week last September, she invited a family of performing artists to make human-sized bubbles that filled the night sky in the courtyard of her store’s building, while a local jeweler — VM Atelier — created eternity gold bracelets en site for curious aficionados. During Milan’s Design Week, she hosted a huge block party, inviting the Milanese cooking duo Gnam Box to prepare lunch and make infusion beverages for throngs of visitors.

“5VIE is happening,” Zambeletti said. “During Salone del Mobile, there was a real buzz.”