A Bathing Ape Opens in Beijing

The store is the Japanese streetwear brand's second in Mainland China. 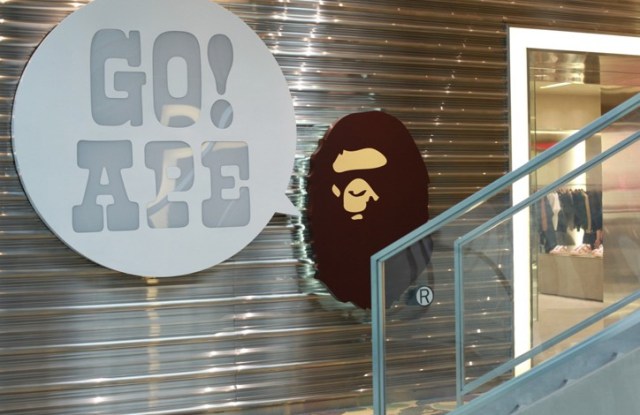 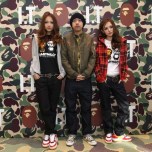 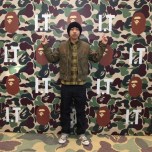 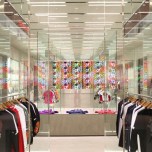 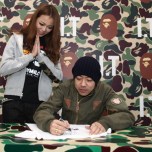 BEIJING — Mainland Chinese consumers love their logos and splashy luxury statement pieces, but they are beginning to refine their tastes for something edgier and more unique, according to Hong Kong-based retailer I.T Limited and Japan’s A Bathing Ape, better known as Bape.

Last week, the two parties opened Bape’s second store in Mainland China in the basement level of the building housing I.T Beijing Market, a multibrand retail complex developed by Rei Kawakubo of Comme des Garçons. In October, the duo cut the ribbon on Bape’s first store in Shanghai. Their partnership dates back to 2006, when I.T opened the Japanese brand’s first store in Hong Kong.

Both Sham Kar Wai, the chairman and chief executive officer of I.T Limited, and Bape’s founder and creative mind, Nigo, marvel at just how quickly the market and its consumers are evolving.

Sham said today’s retail landscape in China reminds him of Hong Kong 22 years ago when he was just 21 years of age and opened his first store selling brands such as Levi’s and Dr. Martens. The executive, dressed sportily in a hooded Moncler jacket, said 1988’s Hong Kong had luxury and mass market players, but didn’t offer much to younger people after cutting-edge fashion.

“We didn’t have that much choice for brands, for style, for fashion. That’s why I started my business,” he said, adding that Mainland Chinese consumers’ fashion knowledge has increased significantly in recent years, especially as they travel abroad to Japan, Europe and the United States.

Nigo said he was a little worried about bringing his streetwear brand, known for its colorful sneakers and graphic prints, to China. He said he didn’t know whether consumers would respond to his style but the Shanghai opening reassured him.

“The young people in China know a lot about the fashion and culture of Japan. It’s more than I expected,” he said after touring the Beijing store featuring glass and concrete interiors and neon lights. “Before the store opening in Shanghai, I visited China many times. Every time I come, I find changes, especially with the women. What they’re wearing is catching up very fast with Japanese fashion. I think the men will change, too, from now on. It’s not there yet, but it’s catching up.”

Sham said the Shanghai Bape store registered a “very good result” in the first few months of operation. He declined to give other sales figures or forecasts for I.T, which is listed on the Hong Kong stock market. The retailer’s brand portfolio includes Balenciaga, Cheap Monday, Dior Homme, Thom Browne, Givenchy, Yves Saint Laurent and numerous others. It has a network of 357 directly controlled stores and 70 stores operated through franchise agreements. Most of the network is located in Hong Kong and Mainland China although it has a small presence in Thailand and a smattering of other countries.

Nigo also declined to disclose sales figures for his company, but said he expects to post growth this year.

Beyond Mainland China, both companies are expanding their businesses in new ways.

Sometime this year, Bape plans to open in Seoul’s Shinsegae department store. This will be a significant development for the brand in the South Korean market. Until now, Bape had a limited presence there at 10 Corso Como.

Elsewhere, Nigo said he thinks the men’s streetwear market is becoming saturated, so he plans to dedicate more resources to his children’s clothing line and Mr. Bathing Ape, his new range of tailored suits and clothing.

I.T’s next project will be opening a 30,000-square-foot store in Hong Kong’s Causeway Bay. The new complex will house Bape and a host of other brands.

“Department stores are a really important channel for the Mainland people to do shopping, but I find that in Mainland China, most of the department stores are quite similar,” Sham said, explaining that he wants to open a store with a European sensibility. “I want to introduce something new to the market.”