A Different Kind of Tour for Victoria Beckham

By Rachel Brown and Holly Haber on November 29, 2012
View Slideshow 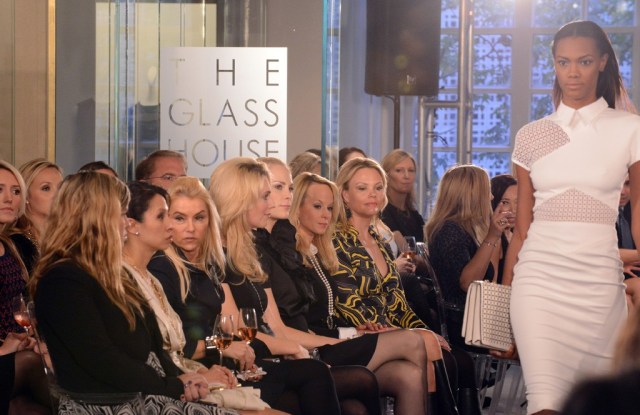 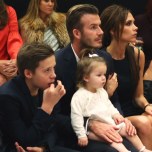 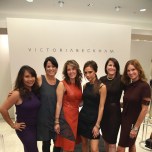 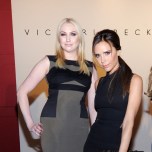 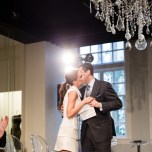 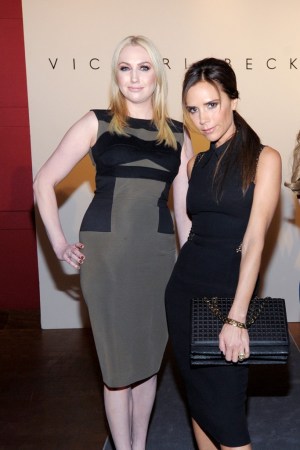 Las Vegas client Audra Baldwin and Victoria Beckham, both in the designer’s dresses. 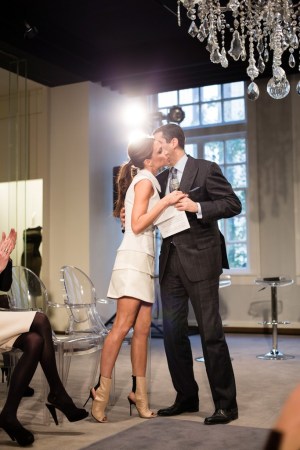 It’s 8 p.m. on a recent Monday night, and Victoria Beckham isn’t out on the town with her soccer-player-slash-underwear-model husband, nor ensconced in the comforts of their Beverly Hills estate with their four children. Instead, Beckham is on designer duty in Las Vegas, spending a couple of hours with 50 or so customers at Neiman Marcus before hopping on a midnight flight to Los Angeles, where she will repeat her performance at another Neiman’s the next day, and then again the day after that in Dallas.

While Neiman Marcus is Beckham’s largest U.S. account (it was also her first, along with Bergdorf Goodman, when she launched for spring 2009), the designer has yet to make a store appearance there until now. Long overdue, Neiman Marcus was itching to get Beckham in front of a few select groups of loyal clients — all chosen because they had already bought Victoria Beckham pieces or demonstrated interest in doing so. These appearances were low-key, private affairs where she was able to personally present her brand’s spring collection.

This story first appeared in the November 29, 2012 issue of WWD. Subscribe Today.

“Neiman Marcus is obviously a very important partnership in America,” said Zach Duane, chief executive officer of London-based Victoria Beckham. “It wasn’t about a particular product launch. It was more about Neiman’s. They have a customer that they were keen on getting close to the brand. We have a really good business with them.”

Speaking of Beckham’s business, Duane told WWD last year that the brand would exceed $12 million in annual sales in 2011. “The business is profitable, which I think for a young fashion brand is challenging in itself, and we are growing fast,” he said. “If you compare 2012 to 2011, we are up 150 percent.”

The job of a designer sometimes seems as much politician as creative director. Face time, handshakes and hugs are important, especially to a still-young brand. Beckham — who has racked up air miles this year with appearances at Holt Renfrew in Vancouver, Joyce in Beijing, Lane Crawford in Hong Kong, Brown Thomas in Dublin and Harvey Nichols in London — realizes that. “I want to get to as many territories and stores as I can, not only to meet my customer, but to also support my retailer,” she said. “I have a really great relationship with all of my retail partners. I think it’s really important. I also want feedback from women. I want to know what women want.”

Certainly, the private appearances go far in establishing long-term relationships with stores and customers, but their short-term impact is measured in immediate sales. While neither Neiman Marcus nor Duane would divulge the exact sales generated as a result of said appearances, Duane asserted that typically 60 to 70 percent of sales of the Victoria Beckham brand have been generated during the designer’s in-store appearances and in the days prior to or following them. “I would imagine they will do very, very well with this [spring] season as a result of these events,” Duane said of Neiman Marcus. (Upon later follow-up, the company would only confirm a “strong response” from customers at the Las Vegas, Los Angeles and Dallas events.)

In all three cities, Beckham spoke a few words into a microphone, thanking the guests for taking time out of their busy schedules to view the collection, and then the shows started — models walking in 23 ready-to-wear looks in Vegas, six in L.A., 16 in Dallas. Afterward, the models in Las Vegas came back out, this time wandering the space in Victoria Victoria Beckham pieces, while in L.A. and Dallas, samples of the secondary line hung on racks for customers to view and try on. In several instances, Beckham gamely walked around and chatted with guests.

Many of the Las Vegas clients, whose ages ranged from their early 20s to 60s and were mostly the wives of local bigwigs, were not shy about showing off their shapely bodies in Beckham’s slim silhouettes — several of which were paired with handbags by Dolce & Gabbana, Hermès and Chanel. In L.A., the guests, predominantly professionals in their 20s, cast a wider fashion net. Beckham looks were, obviously, a popular choice for the occasion while Tibi and Alice + Olivia were represented, too; Alexander McQueen, The Row and Alice + Olivia were among the guests’ favorite brands. In Dallas, the crowd, made up primarily of socialites in their 40s with a number of professionals in the mix, was polished, bejeweled and, like Beckham, in stilettos.

The mood at the daytime L.A. event was light and, as an added bonus, guests included Beckham’s husband David, their son Brooklyn and daughter Harper. While some clients swooned over the diapered baby, they appeared more interested in Beckham’s dresses than David, who calmly chased Harper through the partitioned area on the second floor where the event was held. “This is what I’m about,” said Beckham, as her daughter rolled over and over on a sofa bench. “I always love it when I’m lucky enough to take my children to work with me. I’m a working mom.”

Back in Las Vegas, Beckham stopped at one table so a woman could query her about the vibrant orange that ran throughout her spring line. “It came from a picture of the Japanese sunset that I found when I first started working on the collection,” she responded. Not one to sling one-liners and swap celebrity stories and fashion disasters, Beckham instead had poised, unfussy interactions with her customers, often asking questions about themselves.

“She’s very personable, polite and likable,” said Audra Baldwin, 31, the wife of Bobby Baldwin, president and ceo of CityCenter in Las Vegas. She wore a dress from Beckham’s fall collection, and here ordered a few skirts and jackets. “I really think they are good for day to day,” she said. “You can throw on the blazer over a blouse with a pair of jeans.”

Angie Barrett, a philanthropist who bought four Beckham dresses, a handbag and an iPad cover at the Dallas event, described the designer’s wares “like lipo in a dress. You really have to stand up straight so it’s a posture corrector, too.”

Not everyone was there for herself. Personal shopper Monica Avakian drove north from San Diego to L.A. on the hunt for merch for clients. “It’s young. It’s fresh,” Avakian said of Beckham’s aesthetic. “It’s sexy without being vulgar in any way.”

Beckham concluded her Neiman Marcus tour in the retailer’s hometown. “I’ve never seen quite so many diamonds since getting to Dallas, which is hugely exciting for me,” she told her audience while exhibiting the charm clients love. “So many gorgeously glamorous women — I’m kind of lost for words, to be honest.”

In Las Vegas and L.A., Beckham was impeccable in black dresses from her spring lineup; in a knee-length, collared version in the former city and a thigh-length, skirted version for the latter — a low ponytail swept onto her left shoulder and barely there makeup on both occasions. In Dallas, she wore white, this dress with a peekaboo panel, but the rest remained the same. These details are crucial. Beckham has transitioned successfully from Posh Spice to luxury-sector designer at least in part because customers trust her style instincts. And that’s the point. “I always want to design things that I would wear myself, that I can’t buy from anybody else,” Beckham said.

“People are enamored with her style and taste,” said Jim Gold, president of specialty retail at Neiman Marcus Inc. “She just looks great when she’s out in public and it resonates.” The clients at Beckham’s Neiman Marcus PAs lent credence to Gold’s statement. In L.A., Cleo Kades, a 34-year-old outfitted in Tibi, said, “She never looks contrived. In my book, she’s the ultimate fashionista.” In Dallas, Natalie Chu, who ordered a nude dress and a black-and-red number that Beckham suggested she try, said, “[Beckham] was telling me about the panels in her signature dresses — so smart. It really holds your ‘stuff’ in. Almost magic.” And in Las Vegas, Caroline Eliades, a 24-year-old housewife, was wearing the same dress Beckham wore in the ad for her fall optical line. “She’s so put together. It is such a departure from the Spice Girl years,” Eliades said.

A Spice Girl reference was rare during the Neiman Marcus appearances. These shoppers see Beckham as a fashion designer, not the singer of “Wannabe.” “I’m very proud of my past, but these women are not Spice Girl fans,” said Beckham. “These are women who love fashion. They appreciate quality.”

Duane maintained that many clients around the world are familiar with Beckham via fashion, period. “There are markets where people only know Victoria Beckham as a designer brand, which at first I struggled to believe because she was part of one of the most famous pop acts in the history of pop,” he said. “You assume that everyone is going to think of that side of Victoria. That’s not the case. The Middle East is very much about as her as a designer. People never refer to her as Posh. The same is true in Hong Kong and China. In Beijing, our average customer is much younger. They are in their early 20s, and the Spice Girls mean nothing to them.”

The biggest complaint from the Neiman Marcus customers? They couldn’t get enough merch. “I wish she’d come out with more. Every time they come in, I call my personal shopper [to put them aside.] If they don’t have them, I look online, but they are always sold out,” said Eliades in Vegas.

The tight distribution is on purpose. Gold offered an explanation: “The business would be even bigger but they really control the production because Victoria wants the quality to be great and she wants to be sure the business grows in a very healthy way.”

The brand isn’t going to be everywhere anytime soon. Duane said, “I am struggling to see [exclusivity] as a problem. I am pleased that the customer is really keen to get their hands on the collection because, at the end of the day, that’s the basis upon which we build the business.” Beckham concurred, saying, “I think my customer enjoys the fact that it is exclusive, and it is very special. The ready-to-wear is all still made in London, and I want to keep it quite small so I can offer the very best quality. I don’t want to compromise at all.”

With Beckham firmly in the driver’s seat of her brand as designer and muse, these PAs indicated she’s on the right track. But as the label grows, so do the demands on her schedule. “We are still going to organize personal appearances. The challenge is that we now have 54 countries. We have mapped out the next two years,” said Duane. “I don’t see a time where it won’t be necessary to have personal appearances in some shape or form.”

Again and again, they will inevitably take her away from her home — wherever that may be with her husband leaving the L.A. Galaxy in December — but Beckham is happy to continue logging appearances. “I genuinely really enjoy doing these things,” she said. “Quite often, they are private. We don’t release pictures. I’m not doing this for publicity. I’m doing this because I want to meet my customer, and I want to go to as many different retailers as I can. I definitely want to add categories, but first I have to make sure I can do it and do it really well. I’m not in a rush at all.”