The invitation read dress "gold and glamorous" and nearly 2,000 celebrities, socialites and high-powered shoppers did just that at Louis Vuitton's party to celebrate the official opening of its second Maison in Hong Kong, which is the company's... 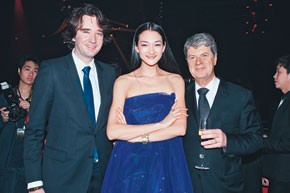 The invitation read dress “gold and glamorous” and nearly 2,000 celebrities, socialites and high-powered shoppers did just that at Louis Vuitton’s party to celebrate the official opening of its second Maison in Hong Kong, which is the company’s biggest store in the world next to the Champs-Elysées flagship in Paris. The store is so big, in fact, that the party started there, with a ribbon-cutting ceremony presided over by Antoine Arnault, Yves Carcelle and model Eva Herzigova.

After cocktails in the store, the striking of gongs signaled that it was time for guests to be shuttled to a “secret location.” The venue, erected just for the occasion, was a mammoth tent facing Victoria Harbour. Images from Vuitton’s latest ad campaign and an antique copper trunk were projected onto the tent. Fittingly, the marquee was located in a West Kowloon site destined for cultural redevelopment. Inside, the space glittered thanks to golden chandeliers over the bar, towering letters spelling out Louis Vuitton and 12 10-meter-long Monogram totems, which hung from the ceiling.

Guests, including Hong Kong’s most famous fashion designer, Barney Cheng, were impressed. “It’s totally blinged out and fabulous. I wish I was an Oscar statuette so I fit in better,” said Cheng, who wore Fendi to the party.

Topping them all, however, was Kanye West, who took to the stage just before midnight to perform a 20-minute set. Former Miss Universe Jennifer Hawkins, who flew in from Australia for the party, knew all the words and sang along from the VIP lounge, where guests were literally dancing on the tables.