A Minimal Set for Dell’Acqua Designs 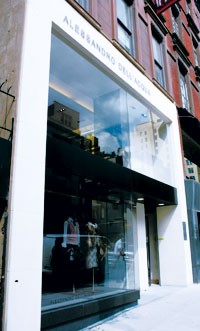 NEW YORK — A clean, modern set for a sensual collection. That’s the surprisingly effective contrast emanating from the Alessandro Dell’Acqua store, the first in the U.S., opening today at 818 Madison Avenue.

Black oak floors, stainless steel fixtures and white walls create a neutral backdrop for a mix of styles, from superlight and sheer dresses to tailored and very textured jackets. “There is a reference to black-and-white cinema that I love so much,” the Italian designer said, explaining the store’s design concept.

The two-level, 2,600-square-foot space, near 68th Street, is projected to post about $2.6 million in sales, or about $1,000 a square foot, according to Jean-Manuel Pourquet, senior vice president and general manager of the Redwall Group, which owns the Alessandro Dell’Acqua brand.

Dell’Acqua said he chose New York since it’s “definitely the most European and cosmopolitan city in America.

“It garners a large variety of styles and trends and is the best-suited city to receive and understand my collections. My fashion is comprised of modern accents — sophisticated and sensual — which I’ve attempted to transport into the concept of the store.” New York women, he said, “have a particular sensibility with regard to details and uniqueness.”

The collection includes such feminine looks as pink chiffon dresses with ribbon straps, priced at $1,200, and cropped leopard-printed rabbit jackets with chiffon printed jaguar lining, priced at $2,275. But those have virtually sold out due to pre-opening customer requests.

Among the other items: stamped goat hair vests, priced at $1,325, and lace overlay slipdresses in nude and black tones, priced at $1,100. There is also knitwear, priced $300 to $1,000, and accessories, including handbags, shoes and sunglasses. The bags, priced from $575 to $1,250, are displayed in front on a white lacquered wall fixture with black glass shelves.

Clothing rods are suspended from the ceiling and contain computer LED crystals that are computer programmed to project different colors such as acid green or purple, depending on the color statement of the season. This glowing fixture system also is used as handrails on the staircase leading to the second floor, which houses men’s wear including suits priced from $1,400 to $1,500, and coats, at $1,175 to $2,000. Shoes are also on two.

The tall glass facade extending to the top of the second level affords a view into the entire space.

The store was designed by TPG Architecture in collaboration with Dell’Acqua, and cost about $1 million to construct, according to Pourquet. The site was previously occupied by Jaeger.

The Milan-based Redwall Group, which is owned by Claude Arpels, also owns the luxury apparel and accessories label Borbonese, where Dell’Acqua serves as creative director, and the Redwall accessory brand. There is a Dell’Acqua store in Naples, another is set for London in October on Old Bond Street and an L.A. site is being sought. About 30 specialty stores in the U.S. carry the collection.