The first retailers will open in the fall and continue to open through holiday 2019 and early 2020. 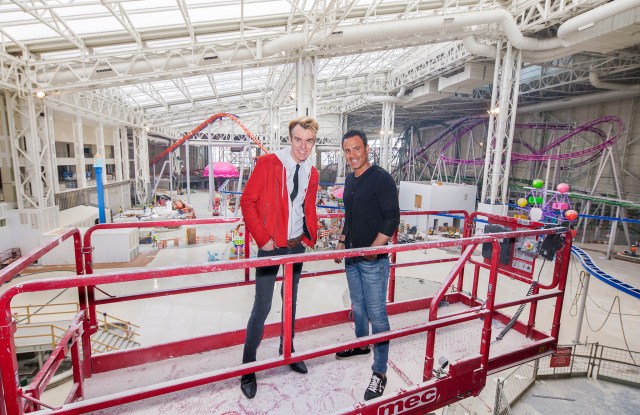 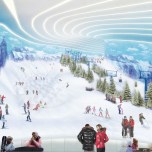 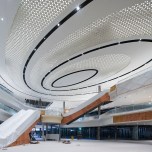 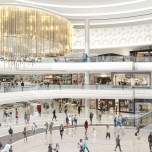 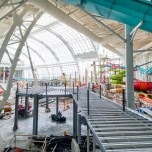 Triple Five Group is almost finished building it. But will they come?

Don Ghermezian, president of American Dream, the 3 million-square-foot entertainment and shopping center nearing completion in East Rutherford, N.J., is confident that they will — and in droves, given the area’s access to more than 20 million residents and 65 million annual tourists. While the project has been under development for more than a decade, Ghermezian is equally sanguine about American Dream’s fall opening date.

“We anticipate luxury retail will do sales north of $2,000 per square foot, and the center itself, well in excess of $1,500 per square foot,” Ghermezian said. “We’ve positioned American Dream to become the highest-grossing center in North America, given its proximity to New York City. The center was built to drive traffic and generate sales.”

Ghermezian spoke exclusively to WWD at the property recently, accompanied by former Neiman Marcus senior vice president and fashion director Ken Downing, who joined American Dream parent, Triple Five Group, as its first chief creative officer. In their first joint interview since Downing started his new job, Ghermezian led a tour of the massive property in a golf cart, with Downing riding in the rumble seat.

“I’ve reviewed every table top surface, the upholstery of every chair,” said Downing. “Some things are staying and some aren’t.” While Downing is wielding his hatchet, he’s adding, too.

A field with live bunnies and bunny wranglers; antique aviary with seasonal live birds and butterflies; stone statues of a reclining odalisque and handsome gentleman, staring longingly at each other across an atrium; dancing fountains; arbors, and expanses of trees are just a few of the inspirations to come from Downing’s fertile imagination.

Downing is gilding the lilies in the koi pond and découpaging the ceilings of cabanas at the DreamWorks Water Park. “We’ll have blossoming cherry trees — you’ll see the seasons change, and grasses, vines, hedges and succulents in different shades of green will create this beautiful mosaic,” Downing, ever the fashion director, said, sounding as if he was talking about his favorite collections of the season. “As much as I live a life of fashion, and love fashion, within me is someone who loves nature.”

Ghermezian seemed unfazed by the cost. “I call it ‘the Downing Effect,'” he said. “I have yet to come across a bad idea from Ken. He thinks very much like I do in terms of the experiment. It’s great to have a creative design and fashion guru who can put [an idea] into reality. I’ll say, ‘OK, we’ll do that’ and, ‘Yup, we’ll do that.’

“I’m a big dreamer and Ken’s a dreamer and executer,” Ghermezian added. “We’re committed to showing the world that American Dream is the game-changing project in retail and entertainment. It’s almost a $5 billion project and we’re in the final stages now, so implementing all of Ken’s ideas is imperative and we’re going to execute on them.”

Saks Fifth Avenue, with in-store shops for Louis Vuitton and Gucci, and Barneys New York, with patio seating for its Freds restaurant, anchor the Koi court, as the luxury area is called. Hermès will open a two-level store that looks like a three-story town house, while Saint Laurent, Dolce & Gabbana, Moncler, Tiffany & Co. and Watches of Switzerland round out the luxury offering. On the more populist side are Zara, H&M, Uniqlo, Fourpost and IT’SUGAR, said to be the biggest candy store in the world, with a 34-foot Statue of Liberty made from Jelly Bellies.

“Ken’s been incredible in bringing new tenants,” Ghermezian said. “When he calls, people want to listen because they know Ken understands fashion and retail and luxury. He’s been instrumental in bringing more tenants on board. We’ve been doing very well on our own. There isn’t a nicer retail experience anywhere in the country. We’re hearing from retailers that the project is exactly what we said we were going to build from Day One. We’re getting close to making a few tenant announcements.”

Instagram moments abound. “I found an amazing tree at Burning Man,” Downing said of the Albero dei Sogni sculpture with more than 75,000 LEDs and 25,000 leaves. “It will sit in the middle of a ripple pond with a bench encircling the tree. Every hour, the ceiling above the tree will dim and the tree will play a song. Kids using our app can take over the tree and program the colors.”

“North American developers are 20 years behind the rest of the world,” Ghermezian said. “There isn’t a project in this country that I could point to and say, ‘that’s on the same level as Dubai.’ We’re not going to slow down, we’re going to move to execute. It’s a few million dollars here and there. We’re going to do it right and we’re not going to do anything that’s fake. We want to have fashion shows in our ski dome, and why wouldn’t a tenant like Moncler or another outerwear brand want to do that? All of Ken’s ideas are incredible, but the ones I like the most, the ones I’m most excited by have the element of fashion that Ken brings to the group. He brings to the table the impact he has in the luxury fashion world.”

Downing is introducing eight to 12 sitting salons to the luxury area, where “Champagne will be served while you’re waiting for Hermés to wrap your Birkin bag. The furniture will change with the trends. Initially, it will be tiger velvet banquettes, apple green chairs and shocking pink chairs.”

While the project has a traditional fashion catwalk, a 60-foot fountain that converts to a runway, in the Koi court, Downing plans to hold the first fashion show at Big Snow, billed as North America’s first indoor snow park, and he already has a theme in mind. “Skiing down our snow will be boys in bikinis and girls in ball gowns,” he said. “I’m covering the chairs with faux fur. Fashion week has its place, but the fashion show is so much more customer-facing than industry-facing. An event court will be available to all of our fashion retail partners, and all of the entertainment, from Nickelodeon Universe Theme Park and DreamWorks Water Park, will be fashion locations as well.”

Ghermezian noted that all 16 of the center’s major entertainment components can be accessed only through retail areas.

In addition to a café cantilevered over the water park, Downing said, “I’m in talks with an interior designer to do the cabanas. Each floor will have a different theme and different furniture. We’re découpaging maps to the ceilings of cabanas. It will be magical and dream-like. We’re not buying art that you hang on the walls. We’re bringing site-specific works. Being an art collector myself, I’m looking forward to meeting new artists and hearing their stories.

“The word pop-up is overused. We’re creating dream-drops,” Downing said. “We’re celebrating young talent and working with the CFDA on names and brands, and partnering with Parsons School of Design and the Fashion Institute of Technology. Part of American Dream is helping people achieve their American dream — fashion designers and certainly artists. Our name is powerful.”

American Dream has a long and complicated history. Mills Corp. in 2005 broke ground on Xanadu — as the project was previously called — but ran out of money and filed for Chapter 11 bankruptcy protection. The site’s second developer became Colony Capital in 2006, which pulled out in 2010. The massive white elephant parked in the Meadowlands was taken over by Triple Five, owner and manager of the West Edmonton Mall in Alberta, Canada, and Mall of America in Bloomington, Minn., the world’s first- and second-largest entertainment and retail centers, respectively, which in 2011 began a complete overhaul, renaming the project American Dream.

The only vestige of Xanadu is a dark wood barrel ceiling over one of the courtyards. Soaring windows allow natural light to stream over the 300,000-square-foot Nickelodeon park, and massive windows and skylights are placed throughout the project. “The amount of light really creates a sense of euphoria,” Downing said. “The old mall model was dark and oppressive. There’s a brightness and luminosity that’s a game-changer for the mall.”

A mall executive posited that The Shops and Restaurants at Hudson Yards, which in March opened on Manhattan’s far west side, and American Dream could be competing for customers. “I don’t think people will go to both,” he said. “The entertainment at American Dream will do well. I don’t see people shopping better retail at a center with entertainment.”

A developer pointed out that stores at American Dream will be closed on Sunday due to Bergen County’s Blue Laws, but added, “I think it’s going to be very successful. I think they’re going to do well, particularly at the popular price points.”

Luring shoppers to the project could be challenging. Ghermezian said American Dream purchased two Rolls-Royces “for our project to bring customers from Manhattan and the Hamptons. We also have three helicopters, two Bentleys and one Rolls-Royce golf cart” for conveying VIPs throughout the property.

There’s been no shortage of skepticism about the project, but the Canadian developer has been able to lease space to key retail tenants while signing deals with entertainment brands such as Nickelodeon, DreamWorks, Sea Life Aquarium and Legoland Discovery Center. Other features include an NHL-sized ice skating rink, performing arts theater, KidZania, CMX Luxury Movie Theater and a 300-foot observation wheel overlooking Manhattan.

“I scrubbed anything that felt like something you’d find in an office tower. It’s so captivating,” Downing said. “The passages between atriums are like palate-cleansers, then you arrive at these great cinematic moments. I’m looking at it through the lens of a child or adult of any age. The customer experience has always been very important to me. Nobody is coming here to see the same-old. It will be like a stage on Broadway, always changing.”

Ghermezian said “the next chapter of American Dream, we’ll be opening two hotels. The plan is that we’ll continue to develop.”