A New Co-Op on the West Side

NEW YORK — The eve of any store opening is always fraught with nervous energy and frantic last-minute fixes. And Barneys new Co-op on the Upper West Side is no exception.

A fleet of managers, assistant buyers and creative-services types... 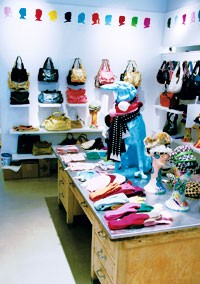 NEW YORK — The eve of any store opening is always fraught with nervous energy and frantic last-minute fixes. And Barneys new Co-op on the Upper West Side is no exception.

A fleet of managers, assistant buyers and creative-services types set about Wednesday putting the finishing touches on the 6,000-square-foot store, located at 2151 Broadway, for its opening today. They rearranged furniture, merchandised sweater displays, steamed wrinkled pieces and dressed mannequins while curious passersbys peered in the windows.

“We’ve been getting such an incredible response from the community about our opening that we’re very excited,” said Howard Socol, chairman, president and chief executive officer of Barneys New York. “I actually feel the store’s too small. I think we’re going to do a lot of business and we’ll want a bigger space.”

“One of the biggest differences between the Co-ops and the flagships is that none of the materials in the Co-ops are very precious,” explained David New, executive vice president of creative services for Barneys New York. In an effort to distinguish between the luxe flagship and the hip, but more contemporary-priced Co-ops, New and his team drove home the industrial theme with carpets made of recycled tires, seats fashioned out of bus hoses and a table created out of old tools.

The new Co-op is a continuation of the look of the Miami outpost, which opened last fall. “We want them to all start looking alike,” said Simon Doonan, creative director of Barneys New York. “This one is sort of the prototype for the rollout of the rest of the Co-ops. We like to layer on [the industrial base] an eccentric layer of semipermanent props.” By this, Doonan was referring to the giant greyhounds, a big metal panther and medical anatomy dolls that he snapped up at junk shops in Palm Beach. “Those will vary from location to location because they are one-offs — that’s how the Co-ops are being individualized.”

The store’s assortment includes Marc by Marc Jacobs, Mayle and Generra, along with smaller labels such as Wyeth, Mothballs and La Petite Salope. The extensive denim selection is made up of major and nascent labels ranging from Rogan to Earnest Sewn. Strong looks for fall featured in the store include anoraks, ponchos, tweed jackets, tulle dresses, printed silk blouses and, of course, denim.

This story first appeared in the September 23, 2004 issue of WWD. Subscribe Today.

“It will have the staple pieces that shoppers always look to buy, but mixed with other interesting designers,” said Terence Bogan, vice president and divisional merchandise manager of women’s Co-op.

Upper West Siders keen on stocking up on such looks and labels now won’t have to venture to the East Side or downtown. “Ever since Charivari left, there’s been nothing on the Upper West Side,” said Socol. “There are a lot of great customers. They shop at our Madison Avenue store, they shop in our Chelsea store, now hopefully they’ll shop here. It’s going to have a great denim assortment, great designers that everybody looks for like Marc by Marc Jacobs, Diane von Furstenberg, Theory and then it’s going to have a lot of interesting small designers that we always have that make us different from everybody else.”