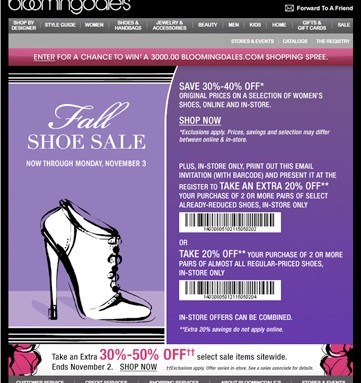 You’ve heard of secret Santas. How about secret sales? They’re going on all over town. Promotions such as Barneys’ Purple Card and Saks mid-October Friends and Family Sale have been on since early last month. Now, price breaks, presales and one-, two- and three-day sales can be found at all the major stores. A big case of economic cause-and-effect as stores across the country recently reported dismal sales figures? It would seem so, but it’s one about which they prefer to remain sotto voce to a reporter, even as some have decked their stores with can’t-miss sales signage and most are working their customer e-mail lists like Barack Obama.

“Retailers in the current economic climate realize that they have to get the customer in the store,” said Robert Burke of Robert Burke Associates, a consulting firm, maintaining that sales broke earlier than ever this season. “The quickest way to do that is by being promotional, which means having sales.”

For the most part, 40 percent seemed to be the magic number early on, and as the markdowns continue. Neiman’s three-day sale included 40 percent off most women’s bridge and contemporary departments, i.e. David Meister, DVF, Kay Unger, Tory Burch, etc., although shoes, jewelry and accessories were not discounted. The NM Web site promoted the same sale, and mailers for the “First Mark” 40-percent-off sale that was held Friday and Saturday arrived in customers’ mailboxes last week. Things were similar at Saks, where giant red signs positioned at elevators and escalators advertised 40 percent off select sportswear, contemporary and evening collections and 30 percent off cashmere, and led to the fourth and fifth floors, replete with racks of 40-percent-off bridge collections and contemporary labels such as D&G, Catherine Malandrino and Marc by Marc Jacobs as well as loads of denim.

At Bloomingdale’s, the markdowns went beyond bridge and contemporary. In addition to Nanette Lepore, Milly, Marc by Marc Jacobs and Theory, Armani Collezioni and Ralph Lauren Black Label were 40 percent off, a discount that extended to the designer floor, where a two-day sale held Oct. 29 and 30 was in effect. “Almost everything is 40 off except Akris, Chanel, Marc Jacobs, [assorted] resortwear and St. John,” explained a salesperson. While sale signs hung over Burberry Prorsum, Chris Benz, Jenni Kayne and Jean Paul Gaultier, other sale merch went unmarked. When asked if a particular collection was on sale, a sales associate responded with a cagey, “What are you looking for? What size are you?” before acknowledging that at least some pieces had been marked down. “This year the sale is one month earlier,” the associated noted.

At Bergdorf Goodman Oct. 30, third-floor designer collections including Stella McCartney, Vera Wang and Proenza Schouler were not on sale, and sales associates were unreceptive to questions about future markdowns. One replied with a curt, “I have no idea,” before returning to her busy BlackBerry session. Not so on the fifth floor, where contemporary collections such as Diane von Furstenberg, Iisli, Matthew Williamson and Theory were marked down 40 percent in the “sale room,” as one Bergdorf employee called it. “It was just set up yesterday,” she said , adding that the discounts would continue “until we get new merchandise in.”

At Barneys New York, a spokesperson noted on Oct. 31, “Our sale schedule is the same as last year.” Unlike at other stores, a storewide search that day of Barneys’ Madison Avenue flagship saw sale items relegated to a few racks of Theory and Marc by Marc Jacobs. But the discount resistance didn’t last long. Fast-forward to Monday, Nov. 3, and the store was hosting a one-day sale (40 percent off) on men’s wear only, at least in Manhattan. In Dallas, a similar sale applied to women’s, designer and Co-op.

“It always has this trigger effect,” said Burke. “Whoever goes first, it always snowballs from there. You’re seeing all the very best retailers resorting to sale to drive traffic. They’re sitting on very big inventories, which are only becoming more and more dangerous with time. They need to clean them up quickly.”

Indeed, less than a week after Bloomingdale’s two-day designer sale, Bergdorf followed that lead and broke sale on select designer labels: 33 or 40 percent on pre-fall and some fall merchandise from collections including Armani, Dolce & Gabbana, Marc Jacobs, Stella McCartney, Thakoon and Richard Chai, among others, as well as some handbags and shoes. On Monday, Nov. 3, Saks began presale on its designer floors, still in effect as of Sunday, when one sales associate said that much more merchandise had been added to the presale offer over the course of the week.

For its part, Barneys appears to have held out the longest. It didn’t break its initial 40-percent-off sale on select designers (Doo.Ri, Nina Ricci, Derek Lam and Marc Jacobs among them) and presale on much of the rest of its inventory until Friday, according to one salesperson. The actual sale commences Wednesday — information that was all but impossible to obtain by asking the sales staff last week. “They don’t tell us anything,” said one sales associate, who had no clue of the upcoming sale schedule, as of Wednesday. “They might tell us one day before the sale. You know more than we do.”

In fact, sales associates within the same store often dispensed conflicting information regarding sales. Saks’ associates were similarly uninformed, offering three different dates for the start date of the full sale, which would follow the presale, an event evidently limited to Saks card holders at the time. And after directing a shopper to Bergdorf’s Dolce & Gabbana racks in search of marked-down merchandise, two sales associates insisted that nothing was actually on sale, while one volunteered that she’d heard from a personal shopping assistant that the sale would start on Friday.

There will be ample opportunity to get their stories straight. As the holidays approach, Burke predicts an even bigger plethora of promotions. “When you enter September and October with poor sell-throughs, you can never make up the dollars,” he said. “When retailers realized they weren’t tracking to sell-through, they had to do something more drastic.” Which could explain the markdown mayhem taking place at the more populist Macy’s.

On Halloween, the festive atmosphere, thanks to costumed employees, was made more so by the bright red sale signs tagging nearly every rack. Some promoted 20 percent off with an extra 20 percent when you use your Macy’s charge. Others took it to 40 percent plus the extra 20 with your charge. And in between all the sales signs were stations where shoppers could sign up to earn a $20 rewards card for every $100 spent.

“They’re always having a sale,” offered one associate in an area where some merch was a whopping 80 percent off, with an extra 20 percent off with a Macy’s card. “This is a secret sale that goes on through Sunday, and next week there’s another sale.” By Sunday, reductions and promotions appeared to have been scaled back, with new signs heralding different, lesser discounts. But at the time, between Michael by Michael Kors and DKNY (40 percent off plus the extra 20 with your card), Elie Tahari (65 percent off) and abundance of discounted private label duds, it was practically impossible to pay full price.