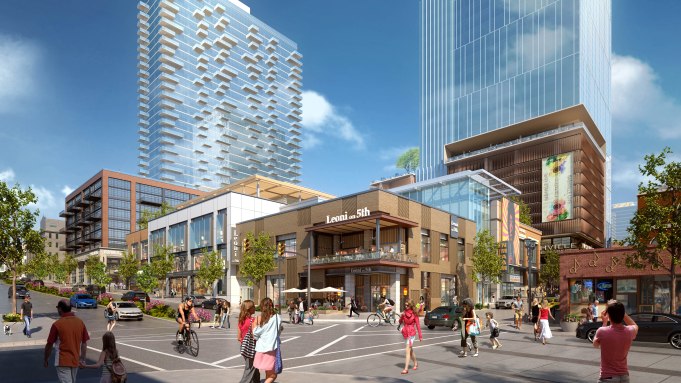 The retail industry thinks it has gotten so progressive on tenant leasing, food, mixing uses and technology, it has maybe forgotten there’s already an old term in place for that: placemaking.

So when San Diego developer Oliver McMillan, in conjunction with Tennessee-based Spectrum|Emery, broke ground last month on the Fifth + Broadway project in downtown Nashville, the idea of turning a 6.2-acre site previously home to a convention center into a mixed-use gem for downtown wasn’t necessarily new. But it’s a strategy that’s served the developer well.

“We started doing that back 25 years ago and now everyone’s talking about urban mixed-use. This isn’t anything new to us,” said chief executive officer and cofounder Dene Oliver. “We really look more toward the past of what has worked for decades and centuries to see what makes sense for the future. So if you look at any of the great cities of the world, what do they all have in common?”

It’s a mix of things, Oliver will tell you, that is the very definition of placemaking: a vibrant population base, great cafes and an environment facilitating human connections.

Those cities Oliver cited all happen to be where Oliver McMillan has built its most recent projects involving retail. Fifth + Broadway’s office and retail component is targeting a late 2019 completion. There’s the boutique mixed-use River Oaks District project in Houston, which came on line in 2015 and totals 650,000 square feet, of which 297,000 square feet is retail in a blend of luxury and contemporary brands, such as Tom Ford, Hermès, Van Cleef & Arpels, Theory, Forty Five Ten, Akris, Kiton and Jo Malone.

It’s not about filling a center or a street with what’s hot at the moment, but more about what works for the surrounding area that drives the developer’s leasing team.

“Every single project we do in every single market we develop always has a merchandising strategy and that’s paramount to how we approach and think about what the market will want, what the market is in need of and a big piece of our approach around all our developments,” said Jeff Zeigler, senior managing director of property-asset management and leasing. “We always want to create a point of differentiation and so we look at all of the retail components before we break ground.”

In its own backyard, the developer is credited with creating the vibrant Gaslamp Quarter, and still has three blocks there it controls. North of San Diego is the 123-acre Tustin Legacy project where it has the exclusive negotiation agreement with the city to create a master plan for the former Marine Corps Air Station.

A range of partnerships with retailers – everyone from a Kroger to an Hermès – has  helped set the firm apart. That, combined with a background in mixed-use, urban projects and more than 20 public-private partnerships, also helps in a market Oliver and Zeigler believe to be in only the beginning stages of a cycling out of the old to make way for disruptors.

“We’re long overdue to shut a lot of bad retail malls,” Oliver said. “There are a lot of concepts that have way outlived their useful life and frankly Millennials and Gen X, Gen Y and Baby Boomers are tired of the mediocrity of a lot of products put out for them. That’s why some of the younger, more thoughtful brands like a Warby Parker and a Bonobos are doing so well. [It’s] because of their relevance and authenticity. So part of what’s going on at retail to me is a rebellion of the mediocrity.”

When the dust settles on that rebellion, what does the market look like?

“There are roughly 1,100 malls in the country right now and I think in the next few years you’re going to see half of those malls go away,” Zeigler said.

Oliver was in agreement on the closing of malls, but also predicted the market will see the shuttering of power centers driven by the flight to online for commodities.

“You’re going to see a lot of closings and I think that happens in the next 10 years. There are a lot of public companies that are retailers – I’m not going to mention any names – that will have simply evaporated or will be bought up by a private equity group and I think you’ll probably see some new mini department stores that are much more progressive and done in a much more interesting way, but they’re going to be smaller,” Oliver said. “There will be a lot of new names and in the U.S. you’re going to see more [brands] coming from Europe and Asia.”

Bringing newness to communities and enabling those same scenes that have allowed streets in places such as New York, London, Rome or Paris to thrive is retail’s past and its future.

“We let design get in the way of real estate so we are incredibly conscientious of what happens on the curb and what happens at the street level,” Zeigler said. “We have a mantra of always being gracious on our site and so we think about customers and clients and pedestrians and how they use our properties.”

“I don’t think people have changed all that much. We are still herd animals like horses. We might want to run off and be in our own stall from time to time, but we like to be with one another,” Oliver said. “That’s how mankind’s been forever and that’s not going to change. So if you look at some of those basic emotional needs, what occupies the spaces will resonate because those things have relevance.”

For More Retail Coverage in WWD:

A Retail Reboot for the Middle East

Retail on a Roll in Brand-Savvy UAE

Westfield Ramps Up Work on Final Stretch of UTC Expansion