A Shoe Floor With Flourish at Saks

Saks Fifth Avenue opens its expansive new shoe floor today with the aim of capturing a greater share of a booming category in the luxury and designer worlds. 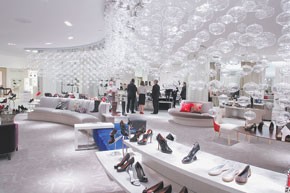 NEW YORK — Saks Fifth Avenue opens its expansive new shoe floor today with the aim of capturing a greater share of a booming category in the luxury and designer worlds.

The Saks flagship’s eighth floor, previously housing coats and evening dresses, has been transformed into the largest designer shoe presentation in Manhattan. With 10,000 square feet for selling and 9,000 for storage, it’s large enough that Saks got a Post Office-approved zip code for the floor — 10022-SHOE — which has also become the name of the department. Compared to the old designer shoe floor, the inventory for 10022-SHOE is being increased 150 percent, there’s 50 percent more selling space and 75 percent greater storage space.

The breadth of product is impressive. There are more than 100,000 stockkeeping units from 50 vendors, with 1,000 to 2,000 styles on display depending on the season. It’s also 100 percent designer-driven. “We wanted to keep the floor pure and, quite frankly, we needed the space,” Ron Frasch, Saks’ president and chief merchandising officer, said Thursday, during a tour of 10022-SHOE. He said shoes is the second-fastest growing category in the store, next to handbags. Saks sells contemporary and bridge shoes on five, and the fourth floor, which previously housed designer shoes, is being converted to a cashmere and coat department.

With 10022-SHOE, “The mission was to expand designer shoes, create an open vista, add more surface space for the collections because they are getting so much bigger and to build a flowing department that enables us to grow the vendor presentations we want,” said Bill Herbst, Saks’ senior vice president of construction planning, design and visual. “We wanted to try something different.”

Even with its spaciousness and broad sight lines, the floor achieves an air of intimacy and sense of discovery because it’s subdivided in different ways. There’s a serpentine bubble-glass chandelier down the center, and a series of seating areas differentiated by inset rugs, banquettes, slipper chairs, pedestals, shelves, long workhorse tables and found tables.

This story first appeared in the August 17, 2007 issue of WWD. Subscribe Today.

However, most of the square footage is devoted to individual designer collections. Key ones displayed prominently are Christian Louboutin, Prada, Chanel, Jimmy Choo, Miu Miu and Giuseppe Zanotti. Prices range from a $210 Stewart Weitzman shoe to a $3,200 Chanel boot. For the 10022-SHOE launch, Saks added nine brands to the mix, including Azzedine Alaïa, Brian Atwood and Jonathan Kelsey.

Aside from seeking to dominate designer shoes, there was another objective — to get customers to check out each other’s selection, so the seating, which was increased by more than 50 percent, is arranged around large tables. “The arrangement is meant for customers to interact with each other,” Herbst said. “It’s put together more like a living room, and it’s very movable.”

The decor is muted, mostly gray and beige, to help the product stand out, though there are little splashes of color on some of the furnishings. Most of the shoes are displayed on tables, more so than along the walls, where they would be harder to see, but the shelves are all eye-level and protrude out to help see the products. The Saks team worked with Hambrecht Oleson Design Associates on the floor design.

Saks executives say they won’t be disadvantaged by relocating a hot-selling category high up in the store, and note they’ve created an express elevator direct to eight. That’s just one of several service initiatives. Among the others:

– There are 12 point-of-sale stations concealed from the selling floor.

– A newly-renovated Roger Vivier shop moving up from the third floor. The restaurant on eight is also being renovated.

The new Saks floor follows the renovation and expansion of shoe departments at stores such as Bergdorf Goodman and Bloomingdale’s, where Saks’ Frasch sold shoes 30 years ago.

“I was an assistant buyer, but back then part of your job was to sell shoes,” he recalled. “It’s a very physical job. You have to constantly bring out complementary pairs in case you don’t have the size in the style the customer wants. Then you’re on your knees, crouching over, putting the shoes on them.”