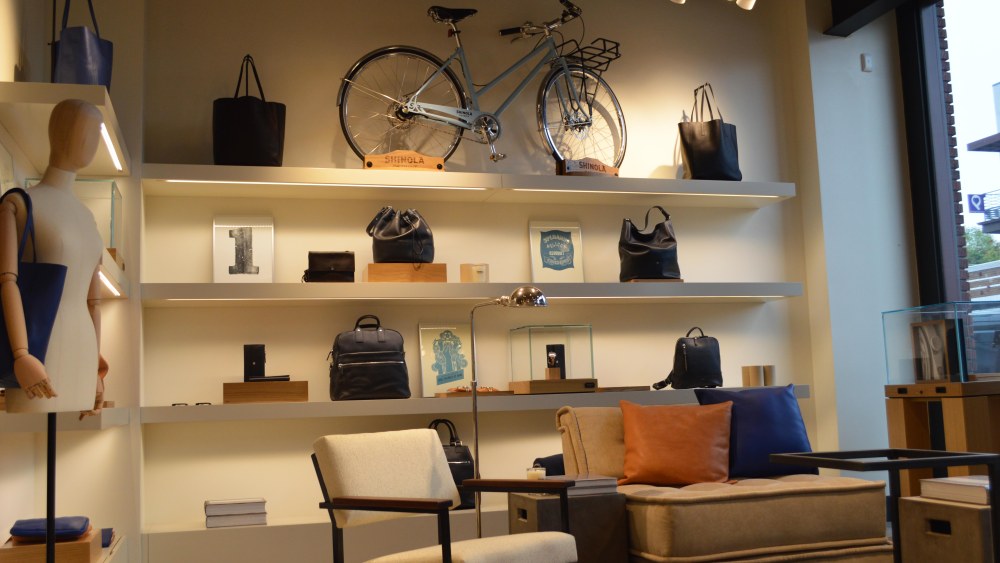 The Stronghold building’s 1920s charm was the ideal place to bring Shinola’s story to a street in Venice, Calif., that has historically celebrated makers and the indie spirit.

The Detroit-based firm — known for its watches, leather goods and bicycles — today holds a soft opening for its 2,400-square-foot store on Abbot Kinney Boulevard.

The company, bent on telling its American-manufacturing story at each door it opens, took up the building that previously housed the denim brand for which the Stronghold structure gets its name. To make its stores, Shinola performs small feats unique to each build-out.

“We want to create a unique space in that neighborhood or area,” said creative director Daniel Caudill. “We wanted to keep it a little bit like the neighborhood, with little rooms, and to tell stories so it has some cadence to it. It’s definitely different from all our other stores.”

The structure was gutted, with the walls redone and windows refurbished. The biggest task was the seismic upgrades to bring the building’s structure up to code. The double doors at the entrance to the building were refurbished by Arlington, Tex., company Double K Millwork & Door and received a fresh coat of paint to match the original shade.

“The challenging piece with this project was just the building itself that Shinola chose,” said Vincent Spataro, Southern California region director of construction management firm Shawmut Design and Construction. “The building that they chose is one of the few older buildings on the street…. There’s a lot of work behind the scenes, and underground, and inside the walls, to strengthen the building and bring the space up to code.”

Once the building’s bones were reinforced, in came the Shinola touches, which included millwork — a key calling card for the company’s stores. Great Lakes Woodworking Company Inc., in Detroit, makes most of the company’s store fixtures. The Venice store is different from other Shinolas in that structural walls divide the space, creating smaller stores within the store. The entrance — with a wall of framed photographs of employees from various departments at the company — is a dedicated women’s area, a growing category for the company, with leather bags and journals.

Step beyond that, and one enters the custom watch area, where a display case holds an array of wrist straps and watch heads for visitors to customize their selection amid the company’s men’s product.

A smaller alcove to the left houses home-office supplies, including an entire wall of the company’s journals in various hues. Opposite that wall, those journals can be custom monogrammed on-site. Hand-painting will eventually also be offered in-store for another customization option during special events.

Farther back will likely be a lounge area that will feature the company’s audio collection to be launched for holiday. For now, the space is temporary storage. “We’re incubating this area,” Caudill said. “We’re not sure what we’re going to do with it yet. We want to do something fun.”

Each Shinola has at least one feature characterizing the space and that multipurpose room will be Venice’s calling card. The Shinola store opening in Los Angeles’ Arts District will be one of the more ambitious projects — 4,000 square feet, boasting a Saved Tattoo, from Brooklyn, and New York eatery The Smile. At the end of the day, Caudill is tasked with creating environments that entice people, get them to stay and then maybe buy a watch or journal.

“I think one of the best compliments I can get on a store is when someone tells me it feels warm or comfortable and they feel at home,” he said. “We want people to come in and touch the watch, hold the leather. We have our watches out on trays so they can actually pick them up.”