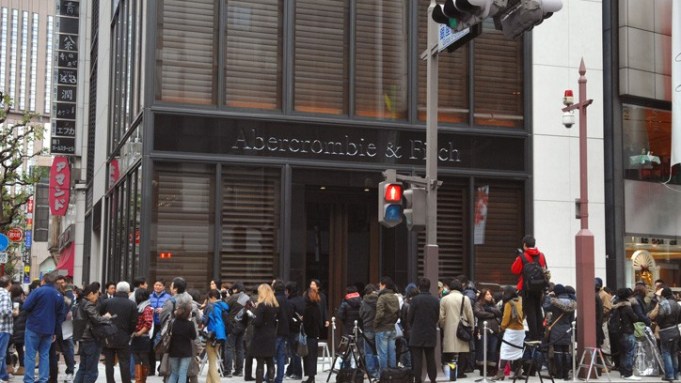 By the 11 a.m. opening, an estimated 1,000 people had lined up to get into the American brand’s first store in Japan. The first customer in line, Hiroaki Kato of nearby Kanagawa, arrived at 9 a.m. on Monday to stake out his spot. “All I’ve had is a single cup of coffee,” he said.

Models dressed in jeans, T-shirts, checked flannel shirts and wool jackets greeted customers as they entered the store. Inside, more models, many barely dressed, roamed the shop floor in front of a massive wall mural.

The first 500 customers in line were given long, narrow posters displaying a male model’s bare back, the same image that was blown up on the sides of an advertising truck that made its rounds through the area.

The store, which covers more than 10,000 square feet over 11 floors, is located on a corner lot in Tokyo’s Ginza district. Neighbors include Salvatore Ferragamo and Prada. A&F went to great lengths to keep the flagship, which joins its other international units in London, Milan and Canada, under wraps. Despite hiring a local public relations firm, the company declined press previews and interview requests and opted out of an opening party.

A&F’s arrival here has been a long time coming. The Ohio-based retailer, known for its racy advertising and preppy image, has contemplated making a foray into the Japanese market for at least four years. The retailer even had its own Japanese subsidiary for a brief time in 2005 before ultimately liquidating the company and parting ways with its head executive, Toshiaki Tashiro.

It is almost certain the Ginza store will be A&F’s most expensive to build, well over the $18 million to $20 million spent on the London flagship, industry sources estimated a couple of years ago when the firm unveiled a preliminary sketch of the building.

An Abercrombie & Fitch Co. spokeswoman said the Tokyo store, the brand’s first in Asia, is very important to the company’s global expansion plans. The company plans to open its second flagship in Japan in Fukuoka next year.

According to Prod Co. Ltd., a real estate consulting company working with Abercrombie, the American retailer is eyeing potential store sites in Tokyo’s Omotesando and Shinjuku districts as well as Osaka, Nagoya and Kobe. Prod also said A&F is planning to open its first Hollister stores in Japan next year. The A&F spokeswoman said she could not confirm plans for any additional stores beyond the Fukuoka unit.

Abercrombie is attempting to differentiate itself from fast-fashion brands like H&M, Uniqlo, Forever 21 and Zara, said a spokeswoman for the American company. Still, observers in Japan are mixed on whether it will find success here.

Osamu Shigematsu, president of United Arrows, said he thinks the brand’s “incredible buzz” and affordable prices will work well in Japan — to a certain degree.

“I’ve never purchased anything there, but the cutting and textile washes are done well. Many people who shopped at luxury stores and select shops might move over to A&F,” he said. “However, I don’t think it will reach the explosive sales of fast fashion.”

You Shitara, president of Beams, argued Abercrombie’s popularity with Japanese shoppers, cultivated when they traveled to the United States, might be past its peak.

“I think it will sell for sure at first, but I am not sure if it will continue or not. I think its arrival in Japan might actually be a little too late,” he said. “I do think it will have some influence in the market around it, however.”