The retailer had a tough quarter, but Fran Horowitz touted continued progress in the transformation strategy.

“Stores matter. The majority of our business still comes out of stores.”

That’s Fran Horowitz, chief executive officer of Abercrombie & Fitch Co., stressing that investments are still funneled into stores, which account for 70 percent of A&F’s total volume, even as the retail streamlining occurs.

On Thursday, Abercrombie & Fitch, impacted by flagship closings and elevated price promoting, reported its net loss rose to $31.1 million, or 48 cents a share, in the second quarter ended Aug. 3, from a loss of $3.9 million, or 6 cents, in the year-ago period.

Total sales reached $841.1 million, slightly down from $842.4 million in the year-ago period. Comparable sales were flat.

Sales guidance going forward is modest, with third-quarter total sales seen up about 1 percent and same-store sales around flat. For the year, Abercrombie expects total and comparable sales to be flat to up 2 percent.

The company took a $45 million charge from flagship closings, which continue to be a big part of the dialogue. Hollister in SoHo and A&F in Copenhagen closed this year and A&F in Milan will close before the year ends, leaving 16 flagships operating.

In 2020, the A&F flagship in Fukuoka, Japan, will close, and most remaining flagships eventually will close as leases expire, kick-out clauses get activated or A&F buys its way out of leases. Abercrombie’s flagship model is considered outdated, expensive and beset by overlong leases. Smaller stores are more efficient and less costly.

One exception is the A&F flagship in Amsterdam. “That one is performing well. We decided to add kids to that store,” said Horowitz.

Since 2010, A&F has closed 470 stores, but Horowitz said 300 “store experiences” — defined as either new stores, remodels or downsizings — were added to the fleet.

Fifty percent of the Hollister fleet has been updated, with modernized stores generating high-single-digit sales gains.

Flagships, she said, “represent a different era. They’re large, in highly trafficked, tourist locations, and have high rents and unfavorable lease terms. Many are large and outdated. The costs involved to modernize are significant and oftentimes without a return.” 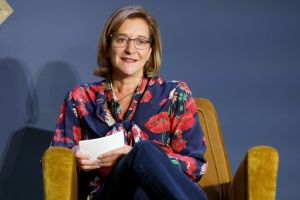 Fran Horowitz at the WWD Apparel and Retail CEO Summit in 2018.  Patrick MacLeod/WWD/REX/Shutterstock

Since the majority of A&F’s sales are generated by stores, “They remain highly relevant, especially to Gen Z, which represents our largest target customer base,” Horowitz said. “Research shows that Gen Z visit stores more often than Millennials. However, with the evolution of digital and omnichannel capabilities, the expectations have shifted. We remain focused on providing the right experience for them and being there whenever, wherever and however they choose to engage with us.”

During the interview, the ceo cited investments in size and markdown optimizations and personalization technologies, as well as in overseas teams, which all should show some return on investment in 2020.

“We have been on a transformation journey,” Horowitz told WWD. “We’re a much stronger company. We’ve made significant investments,” in terms of financial and human capital.

The transformation strategy entails “optimizing” the global store network, enhancing digital and omni capabilities, increasing the speed and efficiency of the product cycle and improving customer engagement through the loyalty program and enhanced marketing.

Le Vesconte was president of EMEA for Dr. Martens and earlier worked at VF Corp. Wu was with VF as general manager of Timberland in China, and earlier, managing director of KFC Taiwan.

Horowitz said both executives will build teams underneath them to focus on assortments, marketing, pricing and promotion, and ‘calendarization,'” which pertains to getting a better understanding of what days are important to consumers in different countries, such as when kids return to school after summer break.

“The real intent is to get closer to our customer,” Horowitz said. “Our goal is to export our (domestic) playbook internationally. We’ve built a substantial business internationally, mostly though a centralized organization.” Now the effort is to localize it, she added.

International accounts for one-third of A&F’s $3.6 billion volume. Weakness has been seen in the retailer’s U.K., Ireland and Hong Kong businesses. Comps were down 3 percent at international stores, and up 1 percent at U.S. stores.

While overall sales were slightly down last quarter, Horowitz said the company saw a “solid” start to back-to-school selling, buoyed by denim.

“As you heard from many of our retail peers this earnings season, the second quarter got off to a slow start,” Horowitz said in a conference call with analysts. However, A&F experienced “monthly improvement as the quarter progressed, enabling us to deliver on our previously issued second quarter outlook.” Momentum has continued quarter-to-date for the solid start to the b-t-s season in the U.S. where comps are positive across brands.

In a review of merchandise categories, Horowitz cited denim, Hollister guys, bottoms across the company, shorts, and Abercrombie dresses, rompers and jumpsuits among the best performers. But tops were soft.

On the China front, the company is “proactively reducing dependence on China and there’s no plan to raise tickets this fall,” Horowitz said. “We will evaluate spring as we move forward.”

With the dollar strong and international tourism down in the U.S., “We continue to see a drag on the coasts across brands. We expect it will remain a drag for the foreseeable future,” she said.