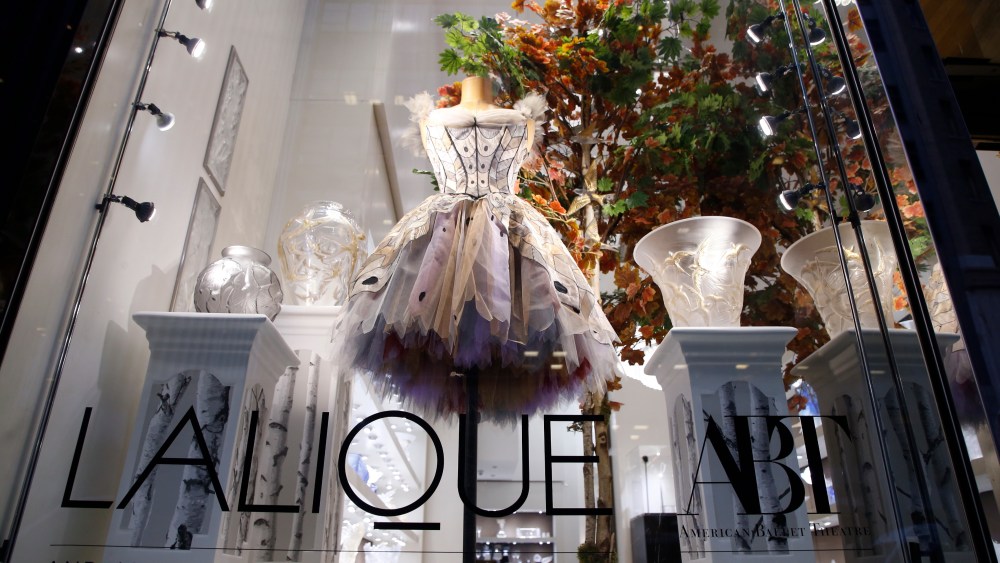 Tutus, tiaras and toe shoes did a grand jeté onto Madison Avenue last Thursday for a weeklong celebration raising awareness for the American Ballet Theatre and its new season starting next month.

The objective was to also raise the level of shopper traffic along Madison Avenue, in particular to the 13 shops participating in the event, “ABT on Madison Avenue.” The boutiques exhibited costumes and accessories from ABT’s vast collection from 78 years performing in New York, and made donations to the ballet company’s costume fund.

“Our mission is to reach the widest possible audience and take the ballet outside the four walls of theater and into the streets, stores and neighborhoods of the city,” said Kara Barnett, executive director of ABT, at last Thursday’s launch.

De Beers shows a headpiece from “Swan Lake;” Emilio Pucci has a Dryad tutu from “Don Quixote;” Edie Parker shows pointe shoes; Paul Morelli has headpieces from “The Sleeping Beauty;” and at Lalique, there’s a Harlequinade tutu, among other exhibits.

“Definitely there is a connection. René Lalique was very much taken with the stage,” said Patricia M. Rowan, director of the store.

“I love color and things that breathe,” said Connor Holloway, discussing ballet costumes. He was among the ABT dancers and patrons who visited the shops to see the exhibits. “Give, stretch and things that make your legs appear longer, dancers love. Tapered legs make a nice silhouette, and women do like a lot of stretch in the bodice,” Holloway observed. “But costumes can be starchy and stiff.”

Also present were members of the ABT Junior Council Executive Committee and advisers Mark Tashkovich and Josette Winograd; students from the Jacqueline Kennedy Onassis School; representatives from Madison Avenue retailers; and executives from the Madison Avenue Business Improvement District, which organized the event. Among the highlights, Saturday’s ABT ballet workshop for children led by teaching artists from ABT’s Jacqueline Kennedy Onassis School. There was indeed dancing in the streets.