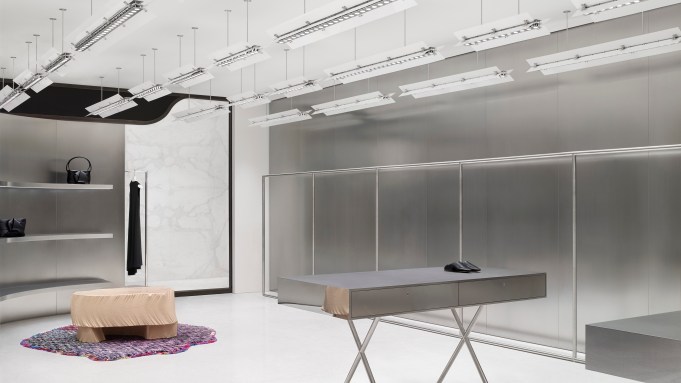 Acne Studios chief executive officer Mattias Magnusson is fresh off of a whirlwind tour of Asia.

On April 6, the company launched its first denim-dedicated concept store in Tokyo called Blå Konst, while simultaneously introducing its new denim collection worldwide — a pared-down approach back to its jeans roots.

The next day, he was off to Hong Kong for the opening of the brand’s second store there, located on Ice House Street. Then on April 8, he headed north to Beijing where the brand unveiled its first presence in the Chinese capital.

The company celebrated the debut in SKP mall with a limited collection of small leather goods — a gold-colored wallet, credit card holder and pouch featuring blue trims — as well as hosting a dinner and raucous after party, where Leaf Greener, Nikki “Sisi” Li and model Du Juan and a range of other fashion tastemakers let their hair down at nightclub Lantern.

The recent openings increase the 20-year-old Swedish company’s store network to 50. Speaking over the phone from Milan — where the firm plans to open a store during men’s fashion week in June, with San Francisco to follow — Magnusson said the launch of a succession of stores in Asia and global pivot for the brand’s signature product came as a complete coincidence.

“People have been telling us for a long time, ‘You need to have a much bigger presence in China and in Hong Kong,'” he said. “While we found them really interesting markets, we also found that China in particular is a very complex one with many layers and dimensions to it that we didn’t really understand. We have the greatest respect for doing business in China so we took it very slow until we felt ready to do it.”

Magnusson is also well aware of what a seismic change it is to be altering Acne’s denim business, which accounts for 15 percent of its revenues. The “Blå Konst” collection, which translates from Swedish into “blue art,” replaces all its previous denim line, and the first range is inspired by creative director Jonny Johansson’s love for the outdoors.

“I love to bring a basic and universal staple wear from underdog position to an artistic level,” Johansson said.

Tokyo was an easy fit for an all-denim store as a city that’s on the forefront of fabric innovation as well as home to many a premium denim label — Flathead, Visvim and 45 rpm, to name a few.

Although Blå Konst is based primarily on six jean styles — a baggy, straight and skinny cut for both genders — it includes a few other pieces — jackets redesigned without pocket flaps for a leaner silhouette, for instance, and shorts and skirts. It’s about half the product assortment the company used to produce.

“First of all, there were a lot of people who felt we were completely crazy,” Magnusson said. “It’s a big risk, because it’s a substantial part of our turnover. A lot of customers are nervous about favorite styles being discontinued. It’s been less than a week so it’s hard to draw a conclusion, but for us, it’s about breathing new energy.”

He continued: “In a way, we spent the last 20 years showing people that we can also do other things — great ready-to-wear, great fashion shows and stores, great bags, other categories. We’ve been spending so much time on that, that we felt we had not given enough love to the jeans.”

The U.S. is the biggest single country market although Asia, as it is for many brands, is the fastest growing. “We’re [seeing] double-digit [growth] in most markets actually,” he said.

In the long-term, Magnusson thinks that Acne could have up to 10 stores in China. But as with its product, Magnusson doesn’t want to overdo the number of units.

“The market in general, there’s so much push for ‘new’ in this climate,” he said. “Today everything is going so fast they’re just doing more and more and more.”