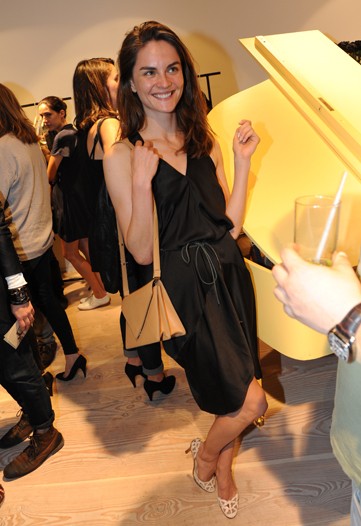 “I love the neighborhood with its mix of tradition, creativity and modernism,” said Jonny Johansson, creative director of Acne.

Housed in a Georgian townhouse, the store – previously an art gallery – has a light, airy feel with white walls, pine floors and black metal rails. A gallery-like space on the top floor showcases footwear and opens on to a furnished roof terrace.

Two oversized black wooden eagle sculptures by Helmut Lang keep watch over the denim area.  “I was very sad when Helmut quit [the fashion business], and I felt that he was very important so therefore I felt that it was a good thing to have them here,” Johansson noted.

During the crowded opening party Thursday night, Danielle Scutt said: “I spent most of the night in the changing rooms – the only place I could find some space!”

Scutt joined Julia Restoin-Roitfeld, Daphne Guinness, Daisy Lowe, Ben Grimes and Anouck Lepere at the party, where a pianist played an eclectic mix of pop on the piano.

“My boyfriend is Swedish and he introduced me to the brand,” said Restoin-Roitfeld of her boyfriend Robert Konjic, who models for Gucci.  “He was like, you should wear this, and this, and this.”