NEW YORK — Past the floral arrangements and under the sprawling “roller-coaster” twig installation suspended from the ceiling, there’s a high-tech side to the Utowa store in Chelsea here. 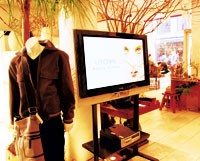 NEW YORK — Past the floral arrangements and under the sprawling “roller-coaster” twig installation suspended from the ceiling, there’s a high-tech side to the Utowa store in Chelsea here.

Utowa’s plasma TVs show scenes of snow-covered forests and mountain peaks, as well as images of cosmetics and clips about designers, creating a fusion of fashion and technology, and a rare sensory retail experience.

Alongside the array of flowers, fashion, skin care, makeup, music, home products and accessories — largely a mix of Japanese products and new designers — are three flat-screen, 42-inch Panasonic plasma high-definition TVs. Four more are in a back room, hung like a row of pictures off the wall forming a media gallery.

The TVs are large, but not jarring, and are connected to a computer station on the mezzanine through wireless technology enabling Utowa to create the programming.

“They create a much more atmospheric retail environment,” said Eduard Duyos, the retail executive who runs the 3,000-square-foot single-unit business. “They’re pleasing and soothing for customers. They get all senses attended to.”

Such “digital signage” is growing in popularity. That’s because the prices are coming down, about 25 percent each year, according to Panasonic, though there are other costs, such as installation and programming, that stores must consider. Panasonic says its prices range from $2,395 for a 37-inch screen to $15,995 for a 65-inch one.

Retailers know they need to enhance selling environments to spur traffic and business, and they acknowledge that people spend hours each day at home gazing into TVs and computers, and probably less time looking at humanity in the flesh. “We live in such a screen culture,” observed Linda Fargo, vice president of visual merchandising at Bergdorf Goodman.

However, that’s something retailers can use to their advantage. While giant chains such as Wal-Mart have for years incorporated cathode ray (regular-tube) TVs in their selling environments, more fashion-oriented retailers such as Macy’s, Saks Inc. and Victoria’s Secret are getting deeper into the new plasma technology of late. Other public arenas, such as the Smithsonian Institution, have begun testing the technology for commercial and marketing purposes.

Plasma screens work on high or standard definition, have flat screens, are based on phosphorous gas technology and generally provide excellent contrast. The high definition stems from having a greater number of pixels (a little dot of color) per inch and therefore provide about four times the picture quality of standard-definition TVs. The biggest screens offered by Panasonic are 65 inches, while the 42-inch versions seem more common at retail.

There are also LED (light emitting diode) screens that are very large, such as The NBC Times Square Astrovision or what’s seen on the exterior of The Fashion Show mall in Las Vegas and inside the center. These are generally not used inside retail settings, considering their size, cost and flashiness.

“There is definitely a need to educate retailers on exactly what plasma is and how it works, and you have to show them that there will be a return on the investment,” said Leslie Wherett, marketing and creative manager of Panasonic Corporate Systems Co., which competes with such firms as Sony, Philips, NEC and Samsung in the digital world.

“For more retailers to get into the digital realm, you need to give them a really good reason to invest in it, and they have to be comfortable with it,” Wherett added. “Everyone thinks the plasma screen is something for a living room, but there’s so much to them.” Generally, consumer plasmas have showier finishes and come with tuners and speakers, while plasmas for professional purposes are black, don’t have tuners and have optional speakers.

She emphasized their versatility in the retail setting. “They can rest on metal stands, you can hang them on the wall or build them into the wall. They can also be incorporated into a kiosk.” The bottom line, she stressed, is that “plasma TV increases sales of product at the point of purchase.”

Still, retailers aren’t quite at the point where they feel plasmas pull in people. They’re generally special-occasion devices in select parts of the store, rather than spread widely across the selling floor.

For Christmas, Bloomingdale’s used plasma TVs to show clips of the film “Phantom of the Opera” in certain of its windows on Lexington and Third Avenues. Windows also displayed fashion inspired by the movie and actual costumes. “You could really see the clips, even in the daytime. People stood and watched,” said Kal Ruttenstein, Bloomingdale’s senior vice president of fashion direction.

Saks Fifth Avenue has been using Philips’ 42-inch flat-screen plasmas and Bill Herbst, vice president of visual merchandising at Saks Fifth Avenue, explained some key advantages of the technology: “You can change the message on a daily basis. They add movement, and anything with movement catches the customer’s eye. We’ve used them in our Christmas windows,” which were themed around snowflakes. Saks also has used them in collaboration with Nike and Tahari in in-store shops, he added.

Before Saks, Herbst was a top visual executive at Macy’s East for years. “We put a ton of [plasmas] in our mezzanine level for men’s wear, and we wanted to expand it, but it was just the cost. Now the cost is coming down, so you will see more of them here at Saks. We are trying to find creative, different ways of utilizing them,” such as using them individually or forming a bank of them for greater visual impact.

Bergdorf’s seems less gung ho. “Back in the Eighties, video monitors became ubiquitous,” said Fargo, who earlier in her career held visual merchandising positions at Macy’s and the former I. Magnin. “All the clubs were putting them in,” so stores she worked at followed the trend, typically showing videos of fashion shows. “At Macy’s and I. Magnin, we definitely used them. They became a little boring and they played out.”

Still, plasma technology represents a way to get a very high-quality moving picture, Fargo said, though so far, Bergdorf’s limits use to mainly trunk shows. Some upcoming renovations could incorporate plasmas into the store design, she added, noting that Prada, Louis Vuitton and Yves Saint Laurent are among the brands that have found inventive ways to use plasma screens.

“There are retailers out there who are kind of running with it to do something inventive. I don’t feel we have really used it to its inventive potential yet. We basically use them to enhance and create a level of theater when we are doing trunk shows.”

About five years ago, when Bergdorf’s was planning a new beauty floor, “we talked about it, but we worried that it required programming and developing interesting content. You have to be ready to continually update the content and you don’t want to do something that is mundane. You can treat them as moving paintings.”

On Bergdorf’s beauty floor, the Erno Lazlo boutique projects a black-and-white collage film, which is more of an artistic expression than a product pusher. “They put the footage together,” but if it was any other way, Bergdorf’s wouldn’t have agreed to put up the screen, Fargo said.

“Plasma screens have a lot of potential to be used in a really captivating way,” she added. “But I’m not a person always attracted to technology or to jump on a technological trend. I like things warm and real. It’s something I have to arrive at a little more conceptually.”

The Smithsonian last year began testing digital display technology. There’s a 52-inch Panasonic turned on its side for a taller, vertical display at the Imax ticket booth in the Smithsonian’s National Air & Space Museum. There’s also nine Zenith plasma TVs at the Udvar-Hazy Center in Dulles, Va., which is part of the National Air & Space Museum. They range from 38 to 60 inches.

The TVs in both museums run off a network in the office of Michael Mansfield, senior designer for Smithsonian Business Ventures, in downtown Washington. Everything from commercials for merchandise sold in museum stores to memberships and promotions for exhibits and Imax films, is shown on the TVs.

“It’s an advertising tool and cross-marketing tool,” Mansfield explained. “Eventually, we will roll out new spots to cross market other museums within the Smithsonian. It’s still in its infancy for us. The overall response has been positive. People recall the screens, find them informative and don’t find them to be distractions, which was one of our major concerns. We can install them without damaging the artifacts and custom-make the frames so they fit aesthetically.”