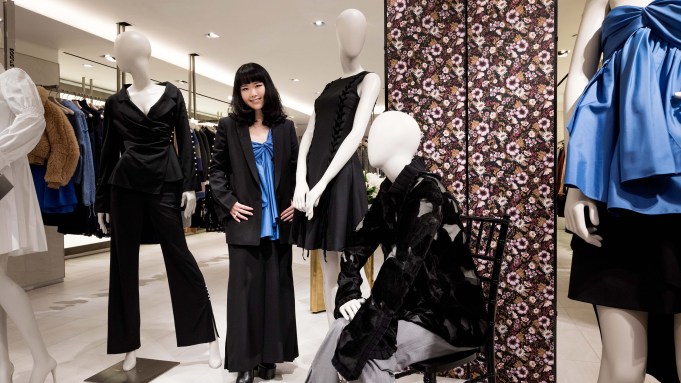 Adeam‘s creative director Hanako Maeda’s life straddles two continents. She divides her time between the brand’s Manhattan design studio and Tokyo office, where she directs production of the line. “I spend half my time in New York developing the new collection and I’m here for New York Fashion Week,” she said. “For production, I’m visiting factories.”

While in Tokyo, Maeda also works on her parents’ brand, Foxey, a designer collection with a more classic aesthetic, “similar to Oscar de la Renta,” she said. Sold domestically, “Foxey has a really big following in Asia,” Maeda said. “There’s been a surge of Asian tourists in Tokyo. My mother is creative director and I’m design director under her. My father is on the business side.”

Foxey was launched before Maeda was born, but she remembers accompanying her parents to factories as child. She realized that fashion was in her blood at a young age but still had a lot to learn. “I didn’t realize how something that starts from a simple sketch — fashion — is the result of teamwork with the mills and patternmakers, etc.”

Maeda admitted that her parents experience a lot of stress. “They aren’t always the happy couple with the business,” she said. “They have a lot of debates and differences. There’s a healthy amount of communication and fighting that keeps the relationship going.”

Maeda is grateful for Adeam being a family-owned business, which affords her autonomy. “I have a lot of creative freedom,” she said. “I’m fortunate to have liberty with Adeam.”

An Adeam pop-up shop was unveiled at Bergdorf Goodman and will operate through Saturday. “Linda Fargo [Bergdorf Goodman’s senior vice president, women’s fashion director and store presentation] has been watching our line for a couple of seasons,” Maeda said. “I felt fall was the right season for the pop-up.”

Adeam’s fall 2017 collection was inspired by Tokyo, and the Gothic Lolita subculture that emerged in the Nineties in Tokyo’s Harajuku section, which teems with young people. Another element is Victorian and Edwardian fashion with a dose of punk. “Harajuku girls are strong and have a strong sense of personal style,” Maeda said. “We’re merging very delicate details with more of a punk attitude.”

The designer was referring to embellishments such as hand-embroidered smocking on a double puffed-sleeve shirtdress and pearl buttons on jackets. “For five years, we’re merging Eastern origins with a sense of growing up in New York,” Maeda said.

“Our focus now is on wholesale,” Maeda said, noting that Adeam is sold at Saks Fifth Avenue; Fivestory; Neapolitan; Browns in the U.K.; Harvey Nichols, Riyadh and Dubai; Lane Crawford, Hong Kong and Shanghai, and; Tokyo midtown, Ginza 6 and Isetan Shinjuku. “In a couple of years, I would love to open a store in New York,” she said.

Adeam launched this fall an exclusive handbag collection for Selfridges, and is creating shoes for the runway that will be available by special order at Moda Operandi.

Maeda, who has a strong interest in fabric, created a capsule for Net-a-porter of washable pieces. “Japanese crepe fabric is washable,” she said. “Adeam has an element of Japanese functionality and a practical aspect. The cloth is very important to us.”