Adec Revs Up the Fashion Quota

Seven months after Philippe Adec retired, the company that bears his name is rejuvenating itself to attract more young-minded shoppers.

By Rosemary Feitelberg on May 31, 2005
View Slideshow 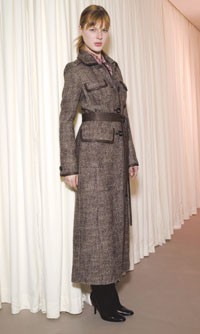 NEW YORK — Seven months after Philippe Adec retired, the company that bears his name is rejuvenating itself to attract more youth-minded shoppers.

President and chief executive officer Aby Saltiel relocated the 18-person company to New York from Paris at the beginning of the year. Staffers occupy 12,000 square feet at 213 West 35th St., where sales executives can see firsthand the details being finessed by the sample makers. Much of the initiative comes from Philippe Adec’s creative director, Julia Jentzsch, who joined the company five months ago. Jentzsch, a former design director at Calvin Klein, worked for Jil Sander, Alber Elbaz, Vera Wang and Tom Ford when he was designing Yves Saint Laurent. She continues to work on Naum, an upscale label she launched with Waleed Khairzada.

“Julia brings luxurious simplicity, which is very important,” Saltiel said. “When I took over the company, I wanted to make sure the people I am surrounded by wanted to wear the clothes. Seriously, that’s important to me — it’s not all about money.”

Philippe Adec’s targeted customer is a woman in her 20s, 30s or 40s. “Simple, young, elegance” is the catchphrase staffers use to describe the brand’s outlook. “We don’t want to change the identity — just make it younger,” Saltiel said.

The fact that his 20-year-old daughter and his 44-year-old ex-wife wear the label shows him that the design direction is working. “My daughter is a big believer in ‘It’s not the collection; it’s how you wear it.’ And that’s true.”

Saltiel is the founder of Morelle Products Ltd., which acquired the distribution rights to Philippe Adec in North and South America in 1983. After Morelle purchased all the rights to the designer’s name, Saltiel became president and ceo. Friends for years, he and Adec met through their families. Adec played poker with Saltiel’s aunt Corinne Bekas in Paris three times a week. Bekas and Adec shared a taste for fashion — she owned Coralisa, a popular Paris boutique that closed about 10 years ago.

Saltiel said he and Adec remain good friends, and the designer is supportive of the business. This year, Saltiel anticipates that annual wholesale volume will climb to $10 million, from $8 million a year ago. In August, three Philippe Adec concept shops will open at the House of Fraser in the U.K. This fall the collection, which wholesales from $65 to $450, will be sold in 100 stores in the U.S. The company plans to expand into France and Greece for spring 2006.

This story first appeared in the May 31, 2005 issue of WWD. Subscribe Today.

In June, Philippe Adec will launch an informational Web site.

To woo more specialty stores, which tend to buy items instead of full collections, the fall line — the first under Jentzch’s direction — is more item-driven. There is also more outerwear, such as a leather trench coat, and more eveningwear, such as dresses and little jackets, including a prewashed wool and cashmere one.