The store is designed to mimic a high school stadium and offers customers a variety of exclusives and special products. 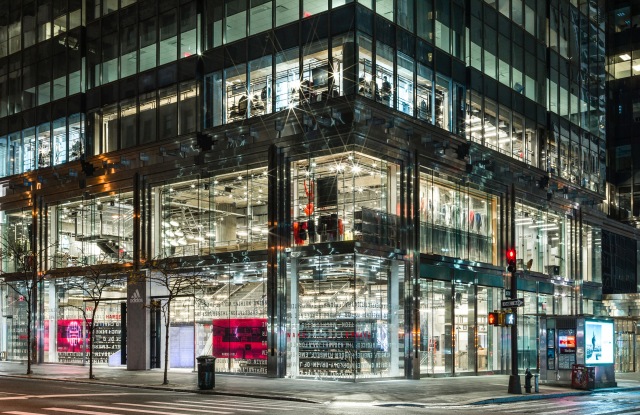 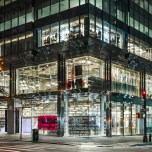 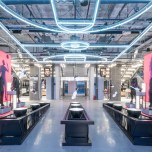 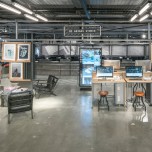 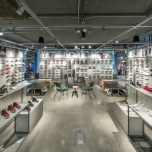 NEW YORK — The one-upmanship among the top sporting goods brands continues with the Thursday opening of Adidas’ largest store in the world at 565 Fifth Avenue here.

The Adidas opening follows on the heels of Nike’s 55,000-square-foot behemoth in SoHo that debuted at the beginning of November. Two years ago, Under Armour opened a 20,000-square-foot Brand House a brief walk away from Nike’s new store and has inked a deal to open what it says will be “the single greatest retail store in the world” on the site of the former FAO Schwarz on Fifth Avenue and 58th Street sometime after 2018.

All of these stores focus as much on offering experiences as selling product, and Adidas is no exception.

The four-level, 45,000-square-foot Adidas store on the corner of 46th Street showcases a new retail design concept for the German brand that is inspired by U.S. high school stadiums. Customers enter through a “tunnel,” climb cement stairs to access the floors, try clothes on in “locker rooms” and can sit on bleachers that face the street to rest or watch games that will be broadcast live on a large television screen. Cash wraps, located on each floor, are designed to look like ticket booths.

This marks the brand’s 13th New York City unit and its 35th in the metro area. Overall, Adidas operates more than 260 stores in the U.S. and 2,700 around the world.

Adidas is opening the unit as the group continues to claw back some of the market share it had lost to Nike and Under Armour and heads to a record year in terms of revenues. Part of the strategy is a growing focus on the brand’s turnaround in North America, where the company said in early November that the Adidas brand has seen a 29 percent top-line increase so far this year.

“Retail is exceptionally important to the brand,” said Claire Midwood, senior vice president of concept to consumer for Adidas, adding that the retail operated by the company — including in-store and franchised shops — is projected to account for 60 percent of revenues by 2020. “It’s important because we can provide the consumer with the experience we want them to have.”

Turning to the New York flagship, she said the decision to unveil the new design concept here fits into the company’s overall plan. “We have a key-city strategy and New York is one of our dominant cities,” she said. “It represents the intersection of sports, street and culture and so many trends start here.”

Going forward, the design concept will be employed at other Adidas stores around the world, but will be “nuanced for the different cities,” in terms of products and services offered as well as the environment, she said.

In New York, the store carries seemingly every Adidas product offered — more than 2,000 stockkeeping units overall — for men, women and children, and includes a lot of “exclusives, special products and experiences,” Midwood said. “Customers today are not necessarily just looking for products; they’re also buying experiences so creating an emotional attachment is important. ”

As a result, the New York store was designed with the athlete in mind. “It wasn’t created in an ivory tower,” Midwood said. “It’s all about helping athletes get better.”

The design is intended to create a “feeling of familiarity” with its tunnel entrance and stadium lighting. Although there is an elevator in the rear, customers are encouraged to climb stairs to reach the different floors, mimicking the feel of a true sporting arena.

The store is evenly split between men’s and women’s. Men’s has its own world on the lower level while women’s is housed on the third floor. A fourth level is devoted to Adidas Originals and the Youth Athlete collection.

After entering through the tunnel on the main floor, shoppers are greeted by the Launch Zone where hot new products will be highlighted. For the launch, the space will showcase the Harden Vol. 1, James Harden’s signature apparel and footwear collection that will be offered here two days before it is rolled out to other sites around the U.S. The Launch Zone also features four virtual reality ports.

Nearby is the Grass Roots shop, where customers can pick up juices and snacks from the Brooklyn-based company. Next to it is a spot where personal fitness consultants are available to provide tips to customers.

There is also a home kiosk, which is inspired by a stadium fan shop, offering New York-themed merchandise and gifts.

Sitting on the bleachers on the mezzanine is a life-size bronze statue of Adidas founder Adolf “Adi” Dassler, which is connected to a kiss cam so customers can plant a buss on his cheek and see themselves on the large television screen. The only other statue of Dassler is located at the company’s headquarters in Herzogenaurach, Germany, Midwood said.

The second floor women’s collection features a large shoe wall in the back as well as separate sections for training and running product and the Stella McCartney collection. There is a bra bar where customers can browse through light-, medium- and high-support models after finding their correct size on a tablet by using the company’s Bra Finder technology. A tights bar with a large assortment of colorful options is also offered.

The floor also features a mini running track where shoppers can be analyzed by store associates to ensure they’re buying the right shoe for their running gait.

In addition to showcasing the Adidas Originals and Youth Athlete lines, the third floor offers a centralized spot for Miadidas, the brand’s customization studio. It’s here that shoppers can create their own sneakers; several models are offered including the UltraBoost, the company’s most popular running shoe. Fewer than 500 pairs of a New York-specific UltraBoost, which will retail for $265, will be sold and they will be shipped to the customer within three to five weeks.

In general, the customization option only adds around 10 percent to the purchase price, the company said, and prices range from $42 for flip-flops to the UltraBoost, which is the top of the line.

All told, there are four customization stations throughout the store.

Lastly, the lower-level men’s world also has its own footwear wall, a print shop where jerseys can be customized, a treadmill for gait analysis, a turf area where customers can test product, and a large assortment of licensed product. There are areas for soccer, basketball, tennis, outdoor and compression merchandise.

The unit features artwork throughout — that will be rotated — as well as collections of books focused on fitness and nutrition. It also offers a concierge service and same-day hotel delivery. The store is focused on sustainability and maintained much of the existing building’s textures and finishes, reducing the need for new materials. It also uses Parley recycled ocean plastic for its hangers and mannequins.

Midwood said the store “creates a foundation” for the company going forward and she believes that the design and experiences offered fulfill the company’s promise touted in its promotional hashtag: #thefutureofsports.