The decision by Adidas to build a giant flagship in Manhattan signifies the athletic company's commitment to growing its American business. 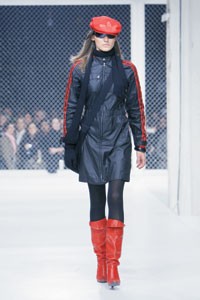 NEW YORK — Adidas-Salomon AG’s decision to build a giant flagship in the heart of SoHo here signifies the athletic company’s commitment to growing its American business.

The store, its largest worldwide, also indicates the company is taking a flashy approach. Even though the 30,000-square-foot store primarily sells sports and performance products, it’s located in the midst of one of New York’s busiest and most fashionable districts. North America now accounts for 23 percent of Adidas’ overall sales and is critical to the company’s long-term success.

Adidas is seeing clear signs of a turnaround in its U.S. business, after years of sluggish sales in America, as it seeks to gain ground on Nike.

Spurred by a strong management team, consumer acceptance of new and technologically advanced products and increased marketing, the U.S. is seeing sales increases and is poised for additional growth, Herbert Hainer, chairman and chief executive officer of Adidas-Salomon AG, said in an interview here.

“We are making progress in the U.S.,” Hainer said. “It’s hard work and it’s not magic. But we believe we are building for the future and are working in all the different areas that we need to improve our business, including products, distribution and communications.”

Adidas is the world’s second-largest athletic company after Nike and had total annual sales of $8.3 billion in 2004, with figures converted from the euro at current exchange rates.

Hainer and Stamminger were in town last week to unveil the 30,000-square-foot Adidas performance store here on the corner of Broadway and Houston Street. At a press conference prior to the store opening, Hainer spoke about the company’s recent decision to shed its Salomon outdoor division, and its growth prospects in the U.S. and around the world. As reported, the company turned in strong first-quarter results last week and is in a solid financial position, with shrinking debt and improved gross margins. Adidas also said it would sell Salomon for about $624 million to Finnish firm Amer Sports Corp. in order to better focus on its core business.

“Everyone is asking us now, what are we going to do with the extra money from the Salomon sale,” Hainer said. “First of all, we are doing a share buyback, and we are looking at other opportunities to increase our business around the world.”

When asked if the company would seek acquisitions, Hainer said: “We want to build the business we have before we think of acquisitions. We feel we still have a lot of potential to grow the Adidas brand around the world.”

Hainer noted that Adidas will continue selling Salomon products for the next three years at its company stores. While Nike has pursued a strategy in recent years of buying other brands, such as Converse, Hurley and Starter, Adidas has been seeking new ways to grow its core brand by working on collaborative lines with designers such as Yohji Yamomoto and, most recently, Stella McCartney, and also adding more high-tech fabrics and color to pump up its performance offerings.

North America, the world’s largest market for athletic products, is critical to the company’s long-term success, Hainer has said on numerous occasions, and Adidas has taken a number of steps to revive its business in the region. In late 2003, the company brought in Stamminger, then a 20-year Adidas veteran, to oversee the North American operations, and also has added key personnel in design and sales. In addition, it spent about $50 million on an integrated marketing campaign featuring Muhammad Ali and others as a way to generate brand interest, a campaign that is continuing this year.

“We have a more professional team and get things done faster now,” Hainer said about the North American operations, adding the company is now differentiating its products by distribution segment and not just trying to sell everything in every channel. “We are looking more closely at which products to place in which stores. We are looking at what customer is going to Finish Line and what customer is going to Nordstrom, and how we can better serve them.”

Stamminger said Adidas expects to notch high-single-digit sales growth in the U.S. in 2005, and double-digit growth in 2006. He noted the Adidas 1, the company’s high-tech performance sneaker that retails for $250, has been particularly well received globally and has exceeded results.

John Shanley, an analyst with the Susquehanna Financial Group, said, “Adidas has definitely turned around in footwear in North America and we are starting to see some progress in apparel. As we get into the second half of the year, retailers are increasing their open-to-buy for Adidas, for both the back-to-school period and the holiday selling season, and that is reflected in the strong forward-order increases….The company and the design team have a clearer handle on what appeals to retailers as well as consumers in the U.S., and with a beefed-up design team in Portland [Ore.], they are putting a more American spin on their products.”

In the first quarter, Adidas said its order backlog, an indicator of future sales, was up 8 percent in North America.

When it comes to challenges in its business here, Hainer said the company is always keeping its eye on Nike.

“The biggest challenge we have in the U.S. is our main competitor,” he said, referring to Nike without uttering the company’s name.

Nike has been on a particularly strong run lately, scoring an earnings gain of 35.5 percent in the most recent third quarter, on a 13.9 percent jump in revenues.

Another challenge for Adidas is fine-tuning the new Respect M.E. collection with Missy Elliott, which was introduced last fall but has been disappointing, according to industry sources. The company is revamping the product and tweaking distribution for the coming fall season, said Stamminger, although he declined to discuss details. The line is now sold in company-owned Adidas Originals stores as well as select urban boutiques. For fall, the collection is more tailored and features fewer baggy tracksuit looks.

In America, apparel accounts for about one-third of overall sales, and footwear two-thirds, but globally, apparel is about half the business, Stamminger said. The three-stripe Adidas logo, while still important, is not as prominent as it once was on many apparel styles, and the women’s offerings now incorporate fitted silhouettes and more fashion-forward looks.

On the marketing front, the company this year will continue to build on its “Impossible is Nothing” global campaign that kicked off last year and was its largest advertising effort to date, said Stamminger. At the same time, it has other big marketing plans in the works. Adidas is the sponsor of the 2008 Olympics in China and recently renewed its sponsorship of the international football (soccer) association, FIFA. Adidas expects to generate more than 1 billion euros, or about $1.3 billion at current exchange, in sales in China by 2010.

Adidas also sees other opportunities to grow its business internationally in areas such as Latin America and Asia. In product terms, other segments targeted for growth now are the golf division as well as company-owned stores, Hainer and Stamminger said. TaylorMade-Adidas Golf, which had been a division of Salomon and was acquired when Adidas bought that company in 1997, will stay with Adidas.

Hainer added, “Golf business is close to $800 million in the U.S. and this could be a big driver going forward.”