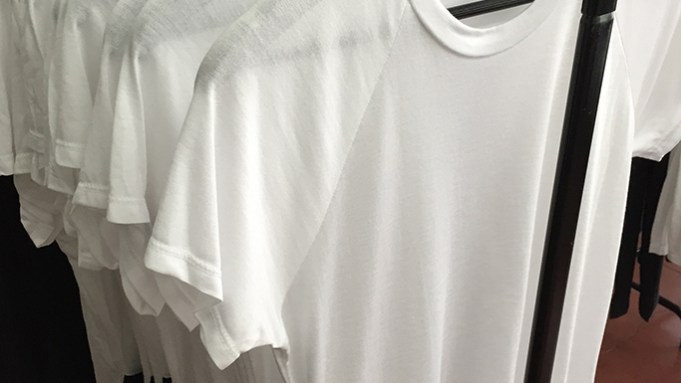 Aella launched online with the idea of creating the perfect pants for professional creatives.

Now it’s ready for the in-real-life experience with a recently opened space in downtown Los Angeles that functions as a showroom for business meetings and a place for customers to shop.

Founder Eunice Cho’s company is one of several fashion tech start-ups that have flexed their muscle when it comes to quickly pivoting business strategies to provide customers with omnichannel experiences. It’s a move that’s helped these start-ups grow quickly and win over customers that have come to expect brands to exist across all channels.

Cho started her company less than a year ago with the idea of wanting to create staple pieces for the closet, beginning with pants made of the company’s Matte Skin Italian knit fabric. Aella  sells four silhouettes on its site priced between $124 and $148.

Aella’s headquarters remain in South Gate, Calif., where the company’s parent and Cho’s parents’ fiber and textile manufacturing company Nextrade is based. But her choice of showroom space on 9th Street was strategic.

“A lot of my suppliers are here [in the building],” Cho said. “This is a digital brand. Our core should be in efficiency.”

Aella’s in good company on a block where the neighbors include Acne, Aesop and APC.

“I love this neighborhood so much,” she said. “It’s just jam-packed with so much activity.”

The showroom is open by appointment only Monday through Friday.

It’s opening comes as the company begins its expansion into pieces beyond pants.

Aella this week released a pencil skirt, retailing for $142, that can be worn with the full zipper detailing on the front or back of the skirt. The auto-lock zipper allows the wearer to control the slit’s height.

The company’s also testing customer appetite for two shirt styles currently on the site. That comes ahead of a planned launch into a fuller tops category in July that will include two silhouettes in two colors. They will be made with a proprietary fabric that promises to keep the wearer dry. The fabric, developed by NextTrade and called Feather Skin, is in the process of being trademarked, according to Cho.