The retailer has updated its assortment and messaging to appeal to a Gen Z consumer.

A look from Aéropostale's back-to-school campaign.

Aéropostale has been flying quietly under the radar since the teen retailer was acquired by Authentic Brands Group, Simon Property Group and General Growth Properties in 2016. But now, the 500-plus-unit chain is working to raise its profile.

The upcoming back-to-school season will see an updated fashion direction targeted squarely at Gen Z, along with a louder message of diversity and inclusivity.

This strategy has been given the green light from the retailer’s owner, SPARC, or Simon Properties Authentic Retail Concepts, a partnership between ABG and Simon that also operates Nautica, Lucky Brand, Forever 21, Brooks Brothers and now Eddie Bauer. General Growth sold its interest in the business to the other partners and is no longer involved.

Marc Miller, now chief executive officer of SPARC, was an 11-year veteran of Aéropostale and had served as chief operating officer when it became part of the larger corporation as part of the $243.3 million purchase of the retailer out of bankruptcy in 2016.

The plan early on was to rescue the company from liquidation and “return it to its former glory,” he said. One of the first orders of business was to build a “top-notch team,” he said, and the first hire was Natalie Levy as president and chief merchandise officer. Levy, a veteran of The Children’s Place, Ann Taylor, Macy’s and Lord & Taylor, was charged with “taking what was a once-proud teen brand and revitalizing and evolving it to connect to today’s Gen Z customer,” Miller said.

Since her addition, Miller credited Levy, who also oversees Nautica and Lucky, as the architect of Aéropostale’s repositioning.

“We’ve made tremendous progress over the last four years,” she acknowledged. “When I joined the brand in 2017, it was selling logo T-shirts and fleece. The first thing I recognized is that there was no core business and also no bottoms business. We also weren’t appealing to the Gen Z customer any longer. Our customer had gotten quite young and there was a negative approach to the brand.”

So the company did a deep dive into customer research in 2018 to “understand how we wanted to evolve and become relevant again to the Gen Z consumer,” Levy said.

That resulted in Aero Oneness, a platform launched for holiday 2019 centered around unity, inclusiveness and the celebration of differences — issues that spoke directly to the target customer. “Gen Z really responded positively to that,” she said.

Miller said Aéropostale has historically attracted a more diverse customer than some of its competitors, but “we never really spoke to it.” But the impact of Aero Oneness has been measurable, Miller said, and proves that the messaging has hit home.

On the merchandising end, Aéropostale set its sights on denim, “the go-to bottom for the Gen Z consumer,” she said. “We wanted to make that a signature category for the Aéropostale brand.”

Levy hired a head of design and built a team focused on offering the latest silhouettes and fabric options, and denim is now the brand’s number-one category overall and is “critical going into the back-to-school season,” she said. “Year-to-date it’s been explosive and up 50 percent over 2019. There’s a lot of newness and innovation that our customer is really responding to.” 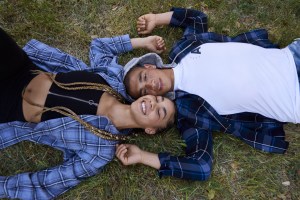 The denim assortment also showcases the company’s sustainability initiatives, or Aero Impact. “We need to protect our environment and the earth,” Levy said, adding that this has translated into the use of Repreve, a recycled polyester fiber, in much of its denim collection, as well as hemp denim. Organic and recycled cotton is also a key part of the brand’s overall assortment.

In addition, Aéropostale has homed in on its customers’ quest for “active, lounge and comfort,” she continued. “Even before COVID-19, we were focused on really growing the whole active and lounge area for girls and for guys. And COVID-19 just accelerated that. We’ve literally doubled our business in sweatpants and leggings this past year.”

The third big push has been a quest to become “more relevant from a fashion perspective,” Levy said. “We were known for basics, logo, heritage.”

But by recognizing the growing importance of TikTok, where certain products had gone viral on the platform, “our business has exploded,” Levy said. “This was all organic, we weren’t paying celebrities to promote our brand. We have seamless tops that are featured on TikTok and we saw traffic being driven to our stores and our site with people asking for this product. And it also happened with our mom jeans. So as a strategy, we’re doubling down on both TikTok and our Instagram presence.” 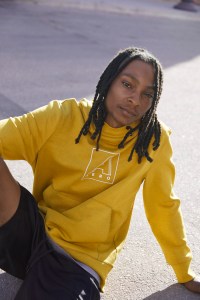 Aéropostale has made an effort to attract the Gen Z customer.

Levy said Aéropostale is now working with 75 creators and more than 300 influencers, but these are real people who connect more with the Gen Z customer than celebrities.

Overall, Aéropostale, which actually started as a men’s private brand at Macy’s in 1987, now counts women as 60 percent of the customer base at its 504 stores. Some 75 percent of those stores are in malls, with the remainder in outlet centers.

It’s no secret that malls have been challenged in recent years, but Miller credited the developers with working hard to reinvent their properties, a strategy that has positively impacted Aéropostale.

“The growth that we’re seeing over 2019 is significant double digits,” Miller said. “With 500 stores, we’re at the right level of penetration. At our peak, we were over 800 stores and we think that was too many, but we do believe there are 500 great malls where our customer is shopping us. There’s a consistent demand by teenagers in the mall and we’re committed there. Malls have become very innovative by bringing restaurants, entertainment, gyms — there have been some creative partnerships by our owners and other mall operators that help — but there’s still a core customer who likes to shop bricks-and-mortar.”

The company has also extended its reach outside the U.S. and operates some 600 stores or shops-in-shop internationally with the largest distribution in Mexico, India and Canada.

“All of our partners buy from our designed line — sometimes they manufacture it on their own — but they’re also seeing strong response to the new fashion and the evolution of the brand. And season-to-date, they’re over plan and over 2019, which is great to see,” Levy said.

When Aéropostale was acquired in 2016, it was a $1 billion business, with $800 million coming from the U.S. Miller declined to provide a current figure, but said: “The business has grown nicely since 2016 both domestically and internationally.”

In addition to the brick-and-mortar presence, Aéropostale has a strong e-commerce operation. And although the executives also declined to say how much of the overall business that represents, Levy said it “has definitely outpaced our store growth, and year-to-date is up significantly. We think there’s continued opportunity on the e-commerce side of the business to grow that at a faster rate.”

Miller said business is up over 2019 and “we still believe there’s plenty of runway for us to grow our penetration.” At the same time, Levy said, the gross margin expansion is outpacing overall sales, there are higher average unit retail sales and higher sell-throughs.

“This is a tribute to Natalie,” Miller said. “When she started, the three biggest challenges were that we were too logo-based and we needed to reinvent what our assortment stood for from a margin and AUR standpoint. We had migrated to too promotional and too low a price, and we knew that for the business model to be successful, we needed to improve our gross margin and AUR rates, which she has done and we’re now at record levels. And we also needed to get the tops to bottoms ratio more in line and we’ve executed against all those of those objectives.”

On Thursday, Aéropostale hosted an event in Industry City in Brooklyn to showcase the b-t-s collection and its new marketing campaign: Back to Free. With students preparing for a return to in-person learning this fall, Levy and Miller and anticipating a strong fall season for Aéropostale.

“They haven’t had a lot of fun in their lives,” Levy said of their target customer. “And we think it’s going to be a very good back-to-school season.”

Back to Free also references the brand’s newest fabric in denim, Free Fit, that has more stretch, is lighter and more comfortable. Also launching a lot of alternative fit, particularly on the girls side.

“We’ve been very overpenetrated in jeggings, but the proportions are changing and we’re going into our mom jean, which has been strong all year, we’re adding a ’90s baggy, straight leg and skater jeans. We think all these alternatives we have for the girls side of the business are going to represent 40 percent of the business. That’s a huge shift from last year. And it’s not cannabilizing anything on the jeggings side of the business so it’s just 100 percent incremental growth.”

Levy pointed to Aéropostale’s ability to increase its speed to market, which has allowed the company to more effectively chase trends. “This market changes so quickly,” she said, and the company can now design and produce hot products within 16 and 20 weeks, even in light of all the current disruptions in the supply chain. “As we move to more fashionable assortments, that’s necessary to make sure our fashion bets are right.”